A few weeks ago, I turned to find myself staring at half a century of living. One of the many gifts that I received from my wife for having reached this “golden” birthday, was a book entitled TEOTIHUACAN, THE CITY OF GODS. It was a book that I noticed at the “Splendors” exhibit (3000 years of Mexican Art) in 1991 at the San Antonio Museum of Art. Since Teotihaucan happens to be one of my archaeological favorites, I proceeded to leverage for such a gift over the course of a few years, and to my surprise, I was rewarded…it is indeed a fine now old book. I mentally devoured the book on Columbus day — a perfect time to review the Americas before the invasions. As of today, I have read and reread the book several times.

The mysterious Teotihaucan was a great Mesoamerican city situated in the Teotihaucan Valley, which is northeast of the ancient lake of Texcoco or the present-day site of Mexico City. In its time, it was the largest metroplex in the Americas covering some 14-16 square miles and supporting a population of between 100,000 to 250,000 (depending on the source). The four phases of the city’s life, spanned from 500 B.C. to its violent end, somewhere around A.D. 750. The site was later excavated by the Aztecs who gave it the name of Teotihaucan — “the place where the gods are created.” Archaeologists believe that this city was larger than Rome during their common existence period.

To me this well-planned metro is a grand enigma, as are most of the ancient cities of Mesoamerica, but Teotihaucan was the oldest model, the forerunner of other great and enigmatic “engineering feats” (the cities) that are found in profusion throughout the beautiful nations south of the United State’s border. 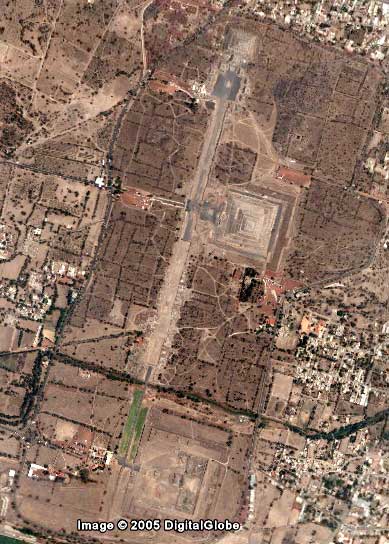 Teotihaucan’s city planners must have been engineering geniuses to configure such a massive tribute to urban living. For us to do as well, would require the ability to fly or use overhead photography just to determine trial and error designs. It is no village, for its ceremonial center is not unlike any governmental complex in today’s modern world including Washington D.C. The pyramids of the Sun and the Moon dominate the site along with other notables such as the Templo de Quetzalcoatl located in a vast complex called the Ciudadela which covers an area of 133,000 square yards. These major constructions along with others are located on a two and a half mile causeway called the “Avenue of the Dead.” One must see this city to truly appreciate the levels of human intellect and engineering expertise that it took to build such a metropolis. One is pushed toward the contemplation of The Mysteries when psychically evaluating it true past.

Teotihuacan presents another feature that is also arcane to the extreme. Perhaps one of the most mysterious enigmas that many historical researchers have pointed out, time after time, are the enormous, thick sheets of mica that were found by archaeologists on the fifth level of the Sun Pyramid in mid 1900s. Later, to compound the picture, at 400 meters down from the Sun pyramid, another mica slab was found of considerable size: some 27.5 meters square (92 feet square) near the Avenue of the Dead. This last sheet of mica was reported by the Viking Foundation. To the astonishment of all archaeologists, these sheets were identified as a type of mica that is found in South America, and nowhere else.

This begs the question of why was this particular type of mica removed and transported some 3218.6 kilometers (2000 miles) to be incorporated into the building site at Teotihuacan? How did they know of the quarry site? How could something this large be excavated, processed and transported in a Stone Age period of history and still remain intact? It is also to be noted that similar finds of South American mica were discovered in certain Olmec sites. This is the “silver bullet” against the archaeological world, which proclaims that the technology of the ancients is far removed from what we consider it to have been. Stone Age propaganda holds no water when the Mica element enters into the picture.

Mica is utilized as insulation to atomic apparatus. Who knew of atomics then? What was the purpose to utilizing mica to the people of Teotihuacan? Were the Teotihaucans building weapons of mass destruction? Or, were they the victims of such weapons. Of all the cities of Mid-America, Teotihaucan seems to be more like a military base that needed pads for airships that hover and land vertically.

Evidence suggests that Teotihaucan came to a sudden and tumultuous end. The site was burned, dug up, then covered up (four to five feet deep), and roofs were torn apart. Craters were found on the floors and on the buildings. What created these aberrations, no one knows. When Cortez passed by while running from the Aztecs, he hardly noted that he was passing through an ancient site since it was overgrown and covered in the debris of time. 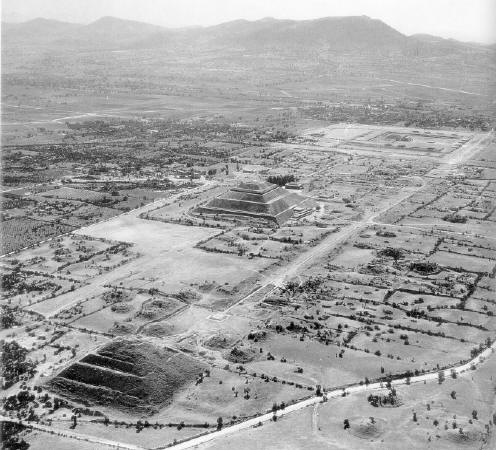 According to Eduardo Matos Moctezuma who wrote this book and has directed excavations on numerous Pre-Columbian archaeological sites in the Americas; Teotihaucan was a victim of its own highly stratified society. He indicates that the city-state was governed by a powerful minority that controlled every psychological, religious, and socioeconomic factor that made up the populous. He believes that the people revolted against the elite after becoming so fed up with the imposition of power-politics via religion and emotional threats. Deep resentments began to manifest in every section of the city, the surrounding suburban areas and satellite cities. It imploded of its own. The people got mad as hell and threw the bums out. Or, was there a massive air bombardment?

Such a great civilization, pushed to oblivion by complexity and emotionality, turned upon itself and chewed every part of its very being into pieces — a catharsis on a massive scale. I began looking at Teotihaucan as a mirror of where we are in time with our present civilization. Juxtaposing the mood of today’s humanity against the evidence of past government-heavy experiments, I realized that just like them, we were becoming a nation and a world of “burnt-out” natives. We are constantly threatened with incessant litigation, taxes in the name of deficit spending, and government programs. This, a reflection just like the ancients, is leveraged through emotional blackmail for taxing, voting or political (religious?) purposes. Our media and the old-ones’ billboard-like pyramids, both broadcast a constant barrage of how we must politically change to meet the demands of the elite. It’s all the same. Will our fate mirror the people of Teotihaucan?

Could our priesthood of governmental elitists tout themselves and their programs, via their media, to such a burdensome point of disinformational and financial saturation, that we would turn on them and our civilization at some point in the future? Have they taxed our livelihood too much? Have they overextended their burgeoning philosophy to the point of rebellion? Life, liberty and the constant positioning for human happiness is what keeps the people in balance. When humankind is pushed to the breaking point, it tends toward self-infliction as a method of cleansing, thus destroying its very being in the process.

Lessons of the past must serve us as a deterrent from doing what others have done to themselves. We should look at Teotihaucan and learn from its example. People need order and discipline, but we do not need to lose our freedom because others have forgotten why we have governments…for the benefit of all the PEOPLE.

And, finally, have we made some massive mistakes in our evaluations of some archaeological sites? Were some of those sites the last remains of a very ancient lost civilization that might have had closely-held but advanced knowledge that would allow them to create grandiose engineering feats across the globe?

To this educated observer, there seems to be evidence of a high civilization that has been smeared out of existence by history. One fears that that ancient and God-like civilization is still hidden somewhere from the general population, perhaps in a place like Area-51.

The Fall of the Mayan Civilization 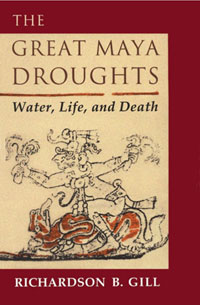