Super Typhoon Haiyan has battered the Philippines with ferocious winds of up to 320 km/h (199mph). Although not the most powerful storm to have ever formed in recorded history, it could be the strongest at the time of landfall. 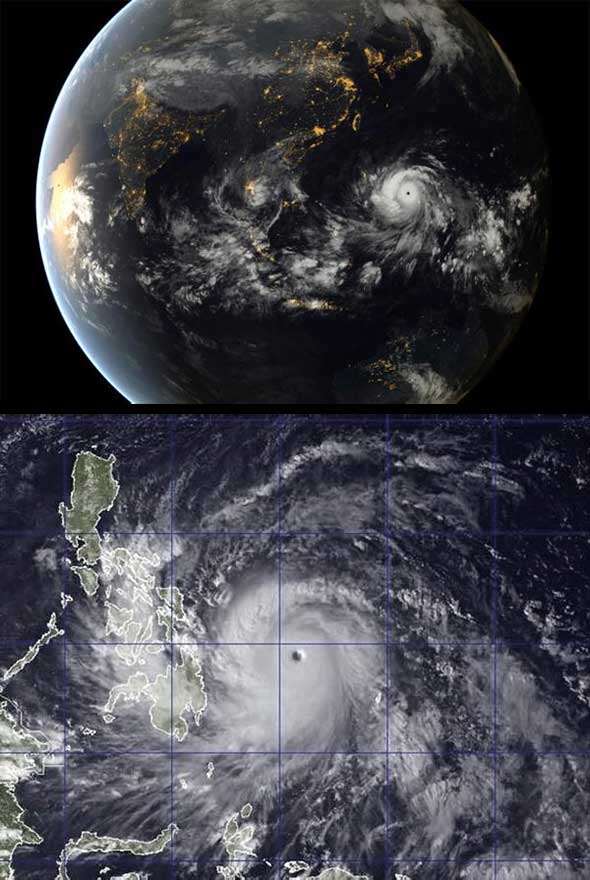 Satellite images show the extent of the storm as it approached the Philippines on 7 November. At times it stretched 600km (372 miles) across. If the same storm was placed over a map of Europe it would stretch from London to Berlin. 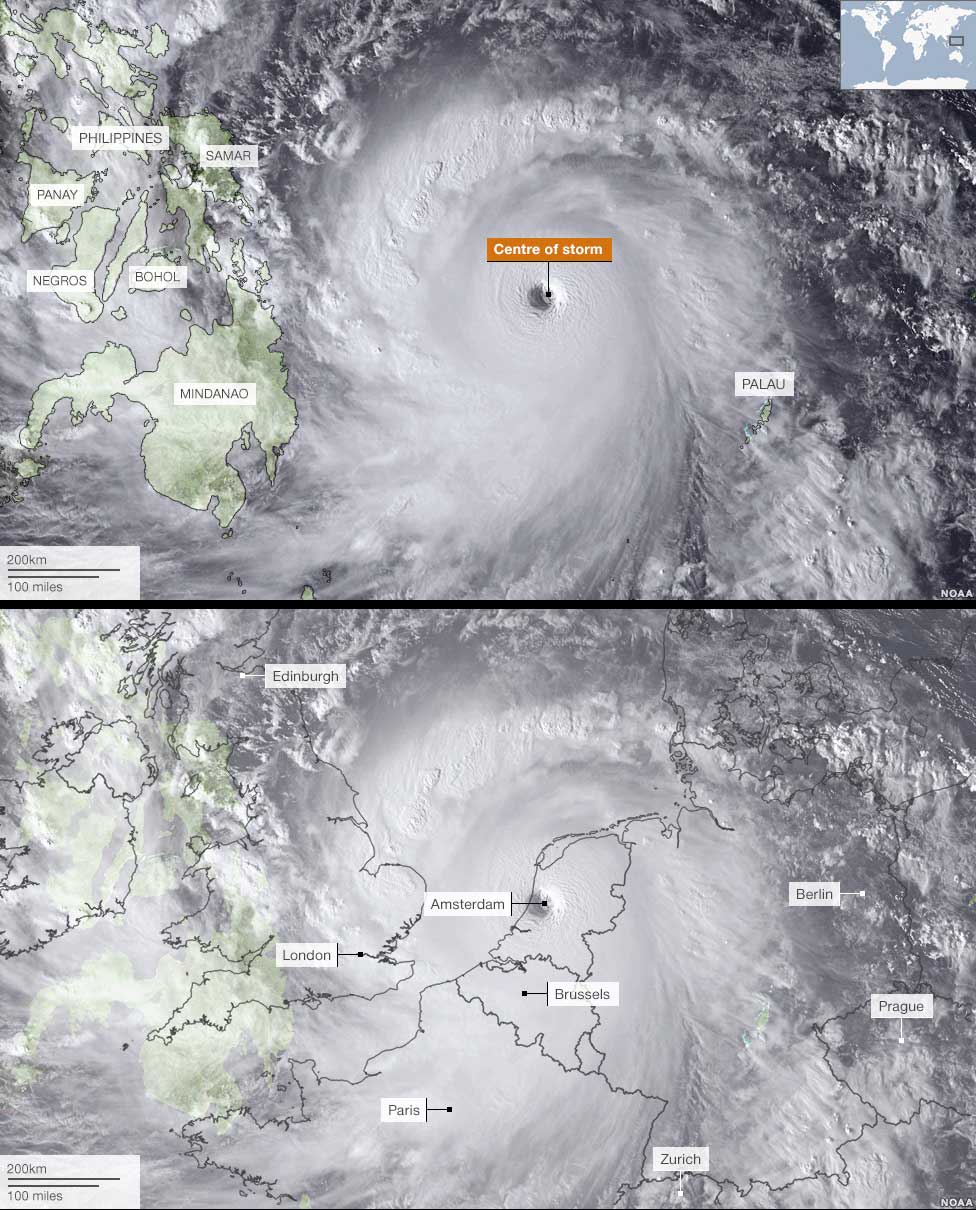 Super Typhoon Haiyan is the 25th tropical storm to enter Philippine territory this year and reports suggest there have been sustained winds of some 320 km/h (199mph) with gusts of up to 378 km/h (235mph).

The “worst” storm is hard to define as such events differ in extremes of wind speeds or gusts, pressure, damage or loss of human life. Some major storms also lose their ferocity as they cross the sea and make landfall.

Major storms in the Pacific region in recent years include the Super Typhoon Megi which hit the Philippines in October 2010 before picking up again and moving on to mainland China. Damage caused by winds reaching 268 km/h (167mph) left 200,000 Filipinos homeless.

But there were surprisingly few fatalities compared with the 2012 Typhoon Bopha, whose 175mph winds wreaked havoc and caused more than 1,000 deaths – or the 1999 Orissa Cyclone in India which wiped out everything in its path, leaving more than 10,000 dead and millions homeless.

Hurricane Katrina, by comparison was Category 3, with winds of 205 km/h (125 mph) when it made landfall in August 2005 in the United States. 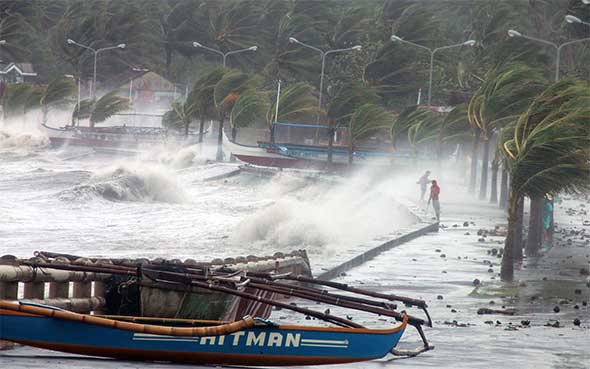 Classified as a super typhoon, the Pacific storm Haiyan has made landfall in the Philippines, bringing top sustained winds that were measured at more than 195 miles per hour before landfall. The measurement reflects the winds sustained by the storm for one minute; the storm was also producing gusts of 230 mph.

Storm Strength Could Be Historic

The strength of the massive super typhoon could be record-setting, weather experts were saying Thursday night.

At 9:45 p.m. ET, The Washington Post’s Capital Weather Gang reported: “With estimated maximum sustained winds of 195 mph, it is thought to be the strongest storm to ever make landfall anywhere in the world in modern records.” Those winds speeds would be 5 mph higher than the recorded maximum sustained winds of Hurricane Camille in 1969, Super Typhoon Tip in 1979 and Hurricane Allen in 1980.

Jeff Masters, meteorology director and founder of Weather Underground in Ann Arbor, Mich.,told Bloomberg that the power of Haiyan is “off the charts.”

As has happened in other large events, Google has published a crisis and relief map, showing the storm’s path and the locations of evacuation centers and other resources.

The Philippine Red Cross is also posting updates and news on its Twitter feed.

“Typhoon ‘Yolanda’ has made landfall over Guiuan, Eastern Samar,” according to the Philippines’ PAGASA weather agency’s most recent advisory, issued at 5 a.m. local time.

“The situation is potentially very destructive to communities,” the weather agency says, noting the chance that trees, agriculture, and buildings could be destroyed in the powerful storm.

The typhoon will not be clear of the Philippines territory until early Saturday morning, according to PAGASA.

“Haiyan has achieved tropical cyclone perfection,” Florida meteorologist Brian McNoldytweeted earlier today. “It is now estimated at 165kts (190mph), with an 8.0 on the Dvorak scale… the highest possible value.”

Haiyan’s maximum sustained winds have grown to 170 knots (196 mph), according to the just-released update from the U.S. Joint Typhoon Warning Center in Hawaii. Wind gusts are being measured at more than 230 mph.

The storm “has tracked westward at 21 knots over the past six hours,” according to the update. “Maximum significant wave height … is 50 feet.”

Haiyan, which is dubbed Yolanda in the Philippines, is the most powerful typhoon so far of 2013. The name Haiyan comes from China, where the word means “petrel” (the seabird).

Thousands of people are fleeing the predicted path of the fearsome storm, which is expected to roar ashore early Friday morning, local time. (The Philippines are 13 hours ahead of EST, according to PAGASA, the country’s weather service.)

Haiyan is expected to hit the region of Eastern Visayas. As of 11 a.m. EST, it was reported to be 130 miles from Guiuan, in the region’s Eastern Samar province.

President Benigno S. Aquino III used a national TV address Thursday to warn residents that they face a “calamity” and urge them to follow evacuation orders and take other precautions.

“Let me repeat myself: This is a very real danger, and we can mitigate and lessen its effects if we use the information available to prepare,” he said, according to CNN.

Fueled by warm water temperatures, the storm “has maintained a sharply defined eye with multiple concentric rings and a deep convective eyewall,” the U.S. Joint Typhoon Warning Center in Hawaii says. It adds that the system is moving at around 22 knots.

“Due to the extremely favorable environmental conditions and recent intensification, the system is expected to remain at super typhoon intensity over the next 24 hours,” even after making an initial landfall, the typhoon warning center says.

After plowing through the Philippines, Haiyan is expected to continue on a westerly track that will take it to central Vietnam.

The Source and more updates >>