Everybody who has traveled to Egypt, Mesopotamia, South America and many ancient places has seen it: the astonishing craftsmanship of these ancient stoneworkers. The precision fit of large stone blocks is eminent in both the Old and New World. It is hardly imaginable, that all of this should have been done by pure manual work alone. There are many theories trying to explained these Ancient Mystery including theories of Professor Davidovits from the Geopolymer Institute in France.
In short, his theory is that the 2 million blocks of limestone that make up the core of the pyramid of Chufu (Cheops), have not been cut into shape, but the limestone was solved in water, brought to the building place in small portions and then the blocks were cast in situ.  Even more interesting are his ideas on the precision-fit Inca walls: He puts forward a technique to soften the stone by use of acid plant extracts!
Another interesting website is “Stone Technology” (see Subject Related Articles below). The ancient Egyptians were masters in working with stone. These pages document photographic evidence, historical research and contemporary debates on stone technology. Topics include predynastic stonewares, straight saws, circular saws, tube drilling and lathes – Photos, Research Papers and Newsgroup Debate Summaries.

This 3000 years old obelisk in the Aswan quarry shows us an amazing feat of technology and archaeologists have learned much about the techniques of stone-cutting from examining this abandoned monument and from the tools which have been left behind (it developed a flaw during quarrying and was never completed, left to lie still attached to the living rock.)

If it had been extracted and erected as originally conceived, the Unfinished Obelisk would have stood 41.75 m (137 feet) tall and weighed 1,185 tons, dwarfing all others  (the largest survivor, the Lateran obelisk in Rome, rises 105 feet and weighs “only” 455 tons.) 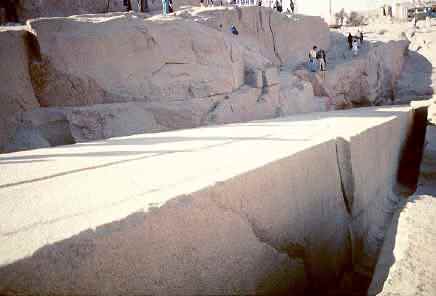 Unfinished Obelisk. The granite quarries of ancient Aswan lay beside the Nile, thus providing easy access to boats for transporting this prized building stone to sites downstream. A crack in the granite stopped the cutting of what would have been an enormous obelisk (estimated at more than 40 meters high). Now the abandoned partially carved obelisk gives us information about how ancient stonecutters worked. Photo © 2001 Mary Ann Sullivan.

Some of the ancient structures from different parts of the world:

Graham Hancock discusses how the ancients built megalithic structures to survive destructive earth changes and how they send a disaster warning to the future generations: