Move over, Bill Gates. It appears that the world’s first PC was invented during biblical times.

The device, made of bronze and encased in wood, was found by divers off the Mediterranean island Antikythera in 1900. 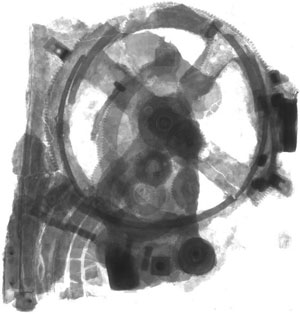 With this new information, the team could reconstruct the Antikythera Mechanism’s functions. The device enabled astronomers in the second century BC to predict the movements of the Moon and Sun, along with lunar and solar eclipses. It could recreate irregularities in the Moon’s motion due to its elliptical orbit. And it may have even enabled Greek astronomers to forecast the positions of the known planets.

“This device is just extraordinary, the only thing of its kind,” says Edmunds. “The design is beautiful. The astronomy is exactly right. The way the mechanics are designed just makes your jaw drop.”

Presentation of the “Antikythera Shipwreck” Exhibition at the National Archaeological Museum in Athens, Greece.

More than 21 centuries ago, a mechanism of fabulous ingenuity was created in Greece, a device capable of indicating exactly how the sky would look for decades to come — the position of the moon and sun, lunar phases and even eclipses. But this incredible invention would be drowned in the sea and its secret forgotten for two thousand years.

This video is a tribute from Swiss clock-maker Hublot and film-maker Philippe Nicolet to this device, known as the Antikythera Mechanism, or the world’s “first computer”. The fragments of the Mechanism were discovered in 1901 by sponge divers near the island of Antikythera. It is kept since then at the National Archaeological Museum in Athens, Greece.

For more than a century, researchers were trying to understand its functions. Since 2005, a pluridisciplinary research team, the “Antikythera Mechanism Research Project”, is studying the Mechanism with the latest high tech available.

The results of this ongoing research has enabled the construction of many models. Amongst them, the unique mechanism of a watch, designed by Hublot as a tribute to the Mechanism, is incorporating the known functions of this mysterious and fascinating ancient Mechanism.

A model of the Antikythera Mechanism, built by the Aristotle University in Greece, together with the mechanism of the watch and this film in 3D are featuring in an exhibition about the Mechanism that is taking place in Paris, at the Musée des Arts et Métiers. 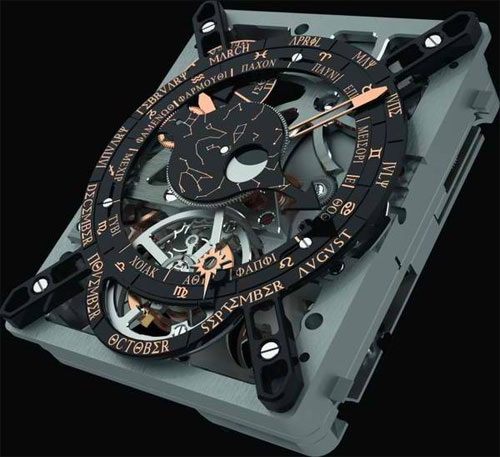 This is the first time in the history of timepieces that these cycles – a legacy from Antiquity – have been studied, reproduced and displayed mechanically: to create some of these gears, the Hublot team had to develop a highly innovative concept of noncircular telescopic hands, capable of pointing to the spiral discs of varying diameters.
The Hublot “Antikythera” watch housing this watchmaking movement, a concept devised in Antiquity, was presented at the Baselworld watch show in Spring 2012. The movement is on show at a permanent exhibition which the Musée des Arts et Métiers is dedicating to the Antikythera mechanism: a 2D and 3D film produced by Hublot will be projected at the exhibition to share with the public the whole story of this Antikythera “machine” from Antiquity to the modern day, creating a bridge between the knowledge of the mechanical engineers of Antiquity and the expertise of 21st century watchmakers. This film is also available on YouTube (http://www.youtube.com/user/antikythera2012). 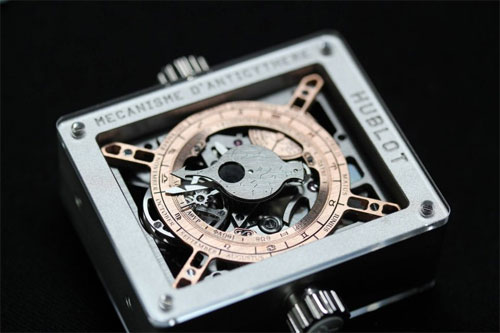 Swiss luxury watch company Hublot has announced a version of the Antikythera mechanism, an ancient Greek astronomical calculator, that is incorporated into a wristwatch. The mechanism is displayed at the 2012 Baselworld expo before moving to a permanent exhibit at Musée des arts et métiers in Paris.