“Something Wicked This Way Comes”:Witchcraft in Shakespeare’s Macbeth & the Connection to Elizabethan England

Witchcraft and the supernatural has been a prevalent theme throughout theatre history, taking place in characters and issues of witches, wizards, magic, ghosts, and other mysticisms. The world’s most famous playwright, William Shakespeare, who wrote during the reign of Queen Elizabeth I, was definitely no stranger to otherworldly premises.

They use cunning forms of temptation when they say Macbeth is destined to be king of Scotland and show him their foretelling visions/apparitions (Shakespeare I, iii, 1–75). Consequently, by placing these initial ideas in his mind, the Witches essentially put him on the path to his own ruin. The Three Witches use of sorcery and divination is obviously for malevolent intent; and “They are clearly agents of a darker power, in league with Hecate, the goddess of the underworld, and their purpose is to foment ‘toil and trouble’ for mankind,” (Fallon 2002: 165). 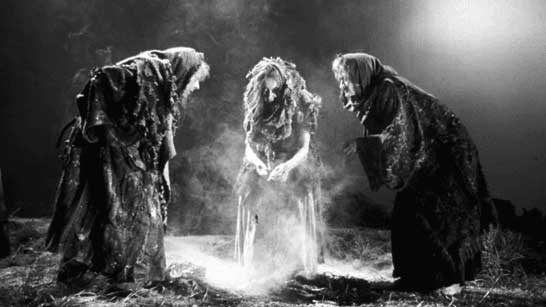 The Weird Sisters themselves serve to represent the darkness and evil in Macbeth, Lady Macbeth, and in the larger context of the play itself. As the characters first shown in Macbeth and the subsequent prophesies they reveal to Macbeth, the Three Witches are probably the catalysts for all the bloodshed and craziness that occurs throughout the rest of the story, although that has been debated for years, (Fallon 2002: 163–164).  The Witches are described by Shakespeare to be quite androgynous, and not definitively male or female, and not clearly human or a form supernatural creature– which only adds to their mystery and function. On the stage, the Witches are normally played by women but are represented differently and with much creative liberty, depending on the era, location, director, and version of the performance. The Witches appear to have inspired very different reactions and emotions in the history of theatre and drama, from voodoo prophetesses, upper–class royalty, to choruses of singers, (Dickinson 2005: 195–196). Yet, in the original version of Shakespeare’s Macbeth, The Bard describes his Weird Sisters (via Banquo) as, “So withered and so wild in their attire, That look not like   th’ inhabitants o’ th’ Earth,” and “You should be women, And yet your beards forbid me to interpret that you are so,” (Shakespeare, I, i, 40–41, 46–48). 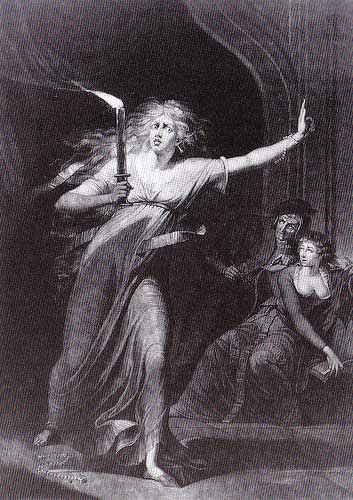 While the Three Witches may not be definitively women, it is probable that the leading woman of the play, Lady Macbeth, could be in league with the Witches, and be a dark witch herself. Lady Macbeth is clearly insane, but she also acts much like a woman practicing witchcraft—calling evil spirits to her and influencing Macbeth to kill, much like the Three Witches do, (Shakespeare, I, v, 28–33). Witches and sorceresses in the fifteenth–century England were thought to be in covenant with the devil/Satan himself, and lived on the cusp between the material and spiritual–mystical worlds; they were nearly always / stereotypically women. Lady Macbeth develops the qualities associated with the cunning, evil Weird Sisters as the play progresses– no regard for integrity, devious, wicked, and signs of mystical powers.

Further adding to the notion of the Lady being somewhat otherworldly, she wants to be “unsexed” to achieve her murderous ambitions, reflecting the androgyny of the Witches themselves, (Dickinson 2005:196–197). Lady Macbeth behaves androgynously, with the strength and ambition of a man, the resourceful evilness of an insane woman, and possesses influences of another world– but the truth remains that she is a woman, and is consistently understood to be and depicted as one on the stage. Accordingly, the fact that Lady Macbeth acts as a mad, power–hungry murderess that mirrors great resemblance to the Weird Sisters reflects highly on Elizabethan culture, and their common portrayals and ideas about witches.

The European societies of the late sixteenth through the seventeenth–centuries were remarkably fascinated with mysterious and supernatural phenomenon like fairies, ghosts, magic, and most especially witches and witchcraft. The people of Elizabethan England were constantly facing uncertainty of life and death with the Bubonic Plague and wars raging throughout the continent, while famine, diseases, and other catastrophes were also constant concerns. Logically, the European people needed someone or something to be held responsible for these terrible events, and religion or God was a major source for explaining the disasters—At the same time, witches, witchcraft, and otherworldly wonders were also frequently regarded as culpable. William Shakespeare, among other writers, incorporated these otherworldly elements into his plays most likely for the same reason; to find some kind of rationale for all the misfortune in the world.  Throughout Elizabethan England, witches bared the brunt of most of this blame, which is cleverly emulated in written works and artistic pieces of the time period, principally in Macbeth, (Alchin 2005: 1–4).

Being a male–chauvinist society, supposed witches in England were nearly always women—Either female healers who had knowledge of medicinal remedies (herbs, plants, etc) or women who were too old, weak, poor, or widowed to combat the rumors of their ‘sorcery.’ Thus, the combination of fear, panic, and lack of culpability for all the calamity, caused riots and tremendous upheaval regarding witches, magic, and witch–hunts. Queen Elizabeth herself actually issues a statute in the mid–sixteenth century, the Witchcraft Act of 1562, condemning any form of magic or mysterious behavior, which was further expanded upon by her successor, James I in 1604. The Witchcraft Act of 1562 sated that, “Anyone who should “use, practice should use, practice, or exercise any witchcraft, enchantment, charm, or sorcery, whereby any person shall happen to be killed or destroyed, was guilty of felony without benefit of clergy, and was to be put to death,” (Alchin 2005: 6–9). 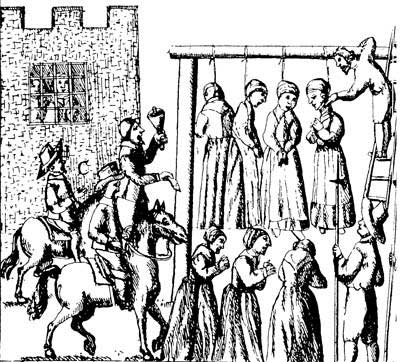 William Shakespeare lived amidst all the supernatural phenomenon infatuation and witch–hunting chaos, which had clear influence on his compositions. As such, Shakespeare’s use of magic, witchcraft, and mystical elements play a more meaningful purpose in his works. The mysticisms and themes serve as vehicles into the feelings and beliefs of English culture throughout that era.

Macbeth, on an elementary level, is a play about ambition, sorcery, treachery, murder, and revenge; it is a dark and somewhat ambiguous work, which is a seamless channel into the society and mood of England during its composition. As stated before, the sixteenth–seventeenth centuries were a time of unrest, change, and uncertainty in Europe and Macbeth is a murkier reflection of this. The homicidal tendencies of Macbeth, Lady Macbeth, and nearly every other character  make the possibility of death all the more likely in the play, much like the odds of death due to the Bubonic Plague, war, and/or famine are all the more real. In connection to the murderous characters, the incredible violence and additional bloodshed that occurs throughout Macbeth can also be another representation of the calamitous history surrounding Shakespeare and Queen Elizabeth I. History acts as a part of nearly every Shakespeare play, and considering he was a product of the past English history and a medium to the future history of England–the fact that he wrote a dramatic piece about the  history of Scotland, presents a fascinating correlation between the  Elizabethan era and his writing. Furthermore, the historical aspect of the play adds to the conspiracy, mystery, and ambiguity of Macbeth. The manipulation and treachery by the Three Witches and Lady Macbeth paradoxically mirror the betrayal faced by women of Elizabethan England who were wrongly accused of being witches and doing sorcery.

The Weird Sisters and Lady Macbeth are all that women are not supposed to be in Elizabethan society, which is ironic as well since there was a powerful, single, woman monarch. The Witches are androgynous, power–seeking, independent, strong–willed, manipulative, otherworldly, scary, and ultimately insane. The women in Shakespeare’s day had no rights (legal or otherwise), and their jobs were to get married, raise babies, and obey their husbands or whatever man is in charge, (Alchin 2005: 12–15). The Witches, while supernatural, are depicted as single women with a manipulative and wicked nature, which is why so many women were accused of and persecuted for supposedly being actual witches. Lady Macbeth, as a probable agent of the witches, is equally as manipulative and wicked, but also extremely strong–willed, power–hungry, and evidently mad—Characteristics which also were condemned as being sorceress–like, but more importantly for the context of Shakespeare’s writing they were characteristics essentially unattributed to women in the fifteenth–sixteenth centuries.

“Fair is foul, and foul is fair. Hover through the fog and filthy air,” (Shakespeare, I, i, 12–13). The infamous quote by the legendary Three Witches IS perfect idiom to describe the historical and cultural framework during William Shakespeare’s composition of Macbeth, and the supernatural mysticisms so prevalent throughout it. The correlation between the witch fearing and otherworldly fascination of Elizabethan England and the dramatic play of Macbeth is undeniably the Three Witches, their influences of dark magic and prophesy, and the passionate, scheming, yet ethereal nature of  Lady Macbeth. The supernatural has been a theme throughout the history of theatre and drama, and William Shakespeare through the play Macbeth, makes the paranormal enthralling, but also historically reflective of his time; yet still significant to modern times–nearly five centuries later.