<< DNA can be programmed to act as a biological data-storage device. Img. credit: Glowimages.com

Nearly exponential development of computer technologies (processing and data storage capacity) can be very helpful in better appreciation of Nature.

Everything that exists is described by numbers.  Information about all life forms on our planet (viruses, bacteria, animals and plants) is encoded biologically in DNA. Human life starts as nearly invisible egg (penetrated by sperm), yet at the very moment of conception, all information about the unfolding human form is already there, encoded in DNA.

The following sequence of events seems to lead to one of the biggest scientific breakthroughs in the history of mankind.

Researchers have encoded a form of rewritable memory into DNA.

The arduous work involved in building the system is almost as notable as the achievement itself, says Drew Endy of Stanford University in California who led the work, which is published today in Proceedings of the National Academy of Sciences.

Synthetic biologists have long sought to devise biological data-storage systems because they could be useful in a variety of applications, and because data storage will be a fundamental function of the digital circuits that the field hopes to create in cells.

“What Drew’s group can do that others haven’t demonstrated is the ability to cycle the memory element over and over, kind of like you can write a bit to a hard drive, read it and change it back over and over again,” says synthetic biologist Eric Klavins of the University of Washington in Seattle.

Digital information is accumulating at an astounding rate, straining our ability to store and archive it. DNA is among the most dense and stable information media known. The development of new technologies in both DNA synthesis and sequencing make DNA an increasingly feasible digital storage medium. We developed a strategy to encode arbitrary digital information in DNA, wrote a 5.27-megabit book using DNA microchips, and read the book by using next-generation DNA sequencing.

A book complete with illustrations has been encoded in DNA

A trio of researchers has encoded a draft of a whole book into DNA. The 5.27-megabit tome contains 53,246 words, 11 JPG image files and a JavaScript program, making it the largest piece of non-biological data ever stored in this way.

DNA has the potential to store huge amounts of information. In theory, two bits of data can be incorporated per nucleotide — the single base unit of a DNA string — so each gram of the double-stranded molecule could store 455 exabytes of data (1 exabyte is 1018 bytes). Such dense packing outstrips inorganic data-storage devices such as flash memory, hard disks or even storage based on quantum-computing methods.

The book, which is fittingly a treatise on synthetic biology, was encoded by geneticists George Church and Sriram Kosuri at the Wyss Institute for Biologically Inspired Engineering in Boston, Massachusetts, and Yuan Gao, a biomedical engineer at Johns Hopkins University in Baltimore, Maryland. They report their work in Sciencethis week.

It marks a significant gain on previous projects — the largest of which encoded less than one-six-hundredth of the data — but organic flash drives are still many years away. There are a number of reasons why the method is not practical for everyday use. For example, both storing and retrieving information currently require several days of lab work, spent either synthesizing DNA from scratch or sequencing it to read the data.

The work illustrates the potential of nonconventional approaches, says Stuart Parkin, who is developing dense forms of inorganic storage media at the IBM-Stanford Spintronic Science and Applications Center in San Jose, California. “You could say that the physical sciences have exhausted the playground of concepts, and we now need to go beyond that world,” he says. “This coupling of the biological world to the physical world will lead to some very interesting storage devices in the next decade.”

Encoding the DNA book didn’t involve fundamentally new technology so much as the creative application of existing techniques, explains Anne Condon, a computer scientist at the University of British Columbia in Vancouver, who studies how DNA molecules can be used in computing.

Previous attempts to store information in DNA have been held up by difficulties in making perfect long strands. Shorter molecules present less of a challenge, so Church and his colleagues kept their storage strands a mere 159 nucleotides long, and generated multiple copies of each to make catching and correcting mutations easier.

In each single strand, 96 nucleotides represented the encoded data as digital ones and zeroes; 19 nucleotides showed how these data blocks should be ordered; and 44 nucleotides enabled easier sequencing. The researchers’ binary code assigned ‘zero’ to two types of nucleotide (As and Cs) and ‘one’ to the other two types (Gs and Ts).

“It’s using some simple ideas in very elegant ways to improve the density of information that one can store,” says Condon. She says that the technology will work best for specialized applications in which data need to be stored for a long time without being read.

The ideal storage period might be as long as centuries, says Kosuri. Even as other storage technologies become as obsolete as magnetic tape and floppy disks are now, researchers will always be trying to improve technology for reading and writing DNA, because the molecule is so central to biology.

And that will bring costs down over time, enabling DNA data storage to move beyond the realm of demonstration projects. The cost of sequencing technologies has already fallen to about a thousandth of what it was four years ago, says Kosuri, and DNA synthesis has achieved the same drops over the past eight years. “The DNA chip we used for this paper held 55,000 oligonucleotides,” he adds. “The newest ones hold a million.” 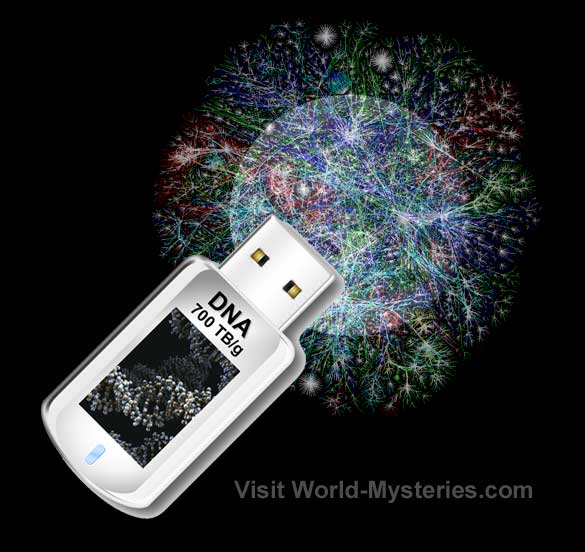 Floppy discs, CDs and hard drives – in the future they could all be replaced by DNA.

Scientists at Harvard University have managed to store 700 terabytes of information in a single gram of DNA – a 1000-fold improvement on the previous record.That’s enough to hold 14,000 Blu-Ray discs, or 233 3TB hard drives, weighing 151kg.”A device the size of your thumb could store as much information as the whole internet,” says molecular geneticist George Church.

“It shows that the vast increase in capacity to synthesise and sequence DNA can be applied to store significant amounts of data,” says Stanford University synthetic biologist Drew Endy.

“If you wanted to have your library encoded in DNA, you could probably do that now.”

To show DNA’s massive storage potential, scientists encoded Church’s latest genetics textbook, and made 70 billion copies – and they all fit in a single test tube.

DNA has many other advantages over traditional forms of data storage. Not only can it store much, much more, it is much more stable – and could last for centuries or millennia, under the right conditions.

The data cannot however be stored in living cells, as normal biological processes would likely wipe it clean.

“The cell kicks out foreign DNA,” says Church. “In a tube, it is less subject to evolution.”

Instead of storing it in living tissue, the DNA is chemically synthesised and stored on a tiny glass chip.

The process is still too costly for it to be commercially feasible, but the price is dropping rapidly. In 2001, it cost $10,000 to sequence 1 million pairs of DNA. By 2012, that price had dropped to 10c, according to the Wall Street Journal.

Scientists are exploring DNA as a data storage mechanism because the sheer amount of data created nowadays. In 2010, Google CEO Eric Schmidt estimated every two days, humans create as much data as the entirety of humanity did right up until 2003.

Social networking and user-generated content is largely to blame – every minute of the day, YouTube users upload 48 hours of video and over 200 million emails are sent, according to tech site Mashable.

“For some archival problems, this could be the wave of the future,” says Church.