It seems all pyramids around the world were designed to display important astronomical data (often related to solar and lunar cycles/calendars).
Two of the best examples are the pyramid of Kukulkan(Chichen Itza, Mexico) and the pyramid of Khufu /Cheops aka Chephren (Giza, Egypt). 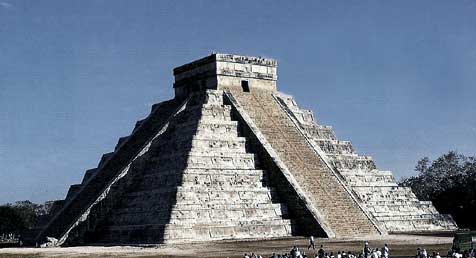 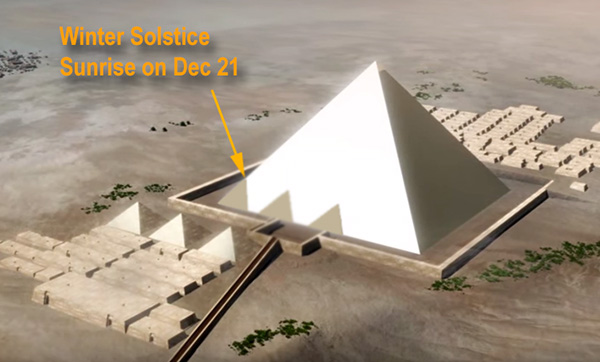 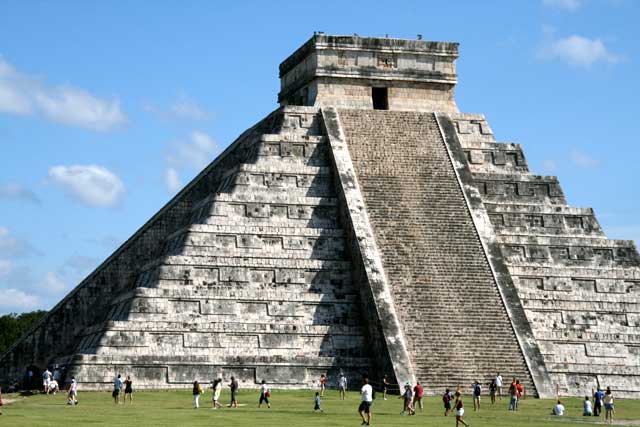 Kukulcán’s pyramid is essentially a nine-step structure culminating in a flat platform that supports a two-story temple.
The height to the top platform is 24 m, the temple adding another 6 m. El Castillo’s design is thought to relate to the Mayan calendar.
Each of the four faces incorporates a broad, steep staircase consisting of 91 steps that ascends to the top platform.
Counting the top platform as an additional step gives a total of 365 steps: 1step for each day of the year.
The staircases rise at an angle of 45 degrees to the horizontal, while the average inclination of the stepped pyramid itself is 53.3 degrees.
The faces of the individual steps are sloped at a greater angle, approximately 73 degrees.

The nine main platforms of the pyramid are thought to represent the 18 months of the haab, and the 52 panels represent the number of years it takes for a calendar round date to recur.

Kukulcán’s pyramid is notable for the fact that at the spring and fall equinoxes (March 21 and September 22) the sun projects an undulating pattern of light on the northern stairway for a few hours in the late afternoon—a pattern caused by the angle of the sun and the edge of the nine steps that define the pyramid’s construction.
These triangles of light link up with the massive stone carvings of snake heads at the base of the stairs, suggesting a massive serpent snaking down the structure. 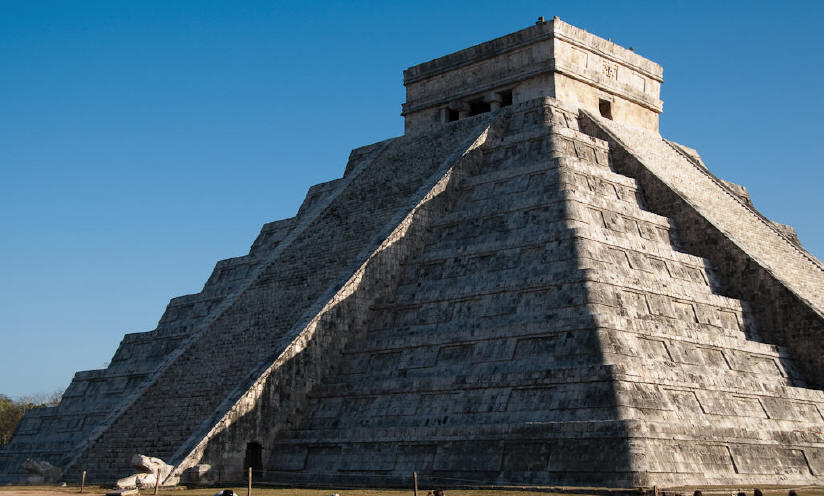 Our Computer Model of El Castillo – the shadow of the Feathered Serpent on the northern stairway on March 21.
© World-Mysteries.com

Geometry of the sunset at Chichen Itza on the Vernal Equinox

The following images are the result of amazing hi-tech combination of satellite images with program called The Photographer’s Ephemeris which shows you the exact direction of where the sunrise and moonrise will be at any particular location and time using Google maps. Geometry of the sunset at Chichen Itza on the Vernal Equinox (March 21, 2010). Click to enlarge.
Image generated by The Photographer’s Ephemeris (TPE) – stephentrainor.com/tools Geometry of the sunset at Chichen Itza on the Summer Solstice (June 21, 2010). Click to enlarge.
Image generated by The Photographer’s Ephemeris (TPE) – stephentrainor.com/tools

The Photographer’s Ephemeris (TPE) is a free application for Mac/Windows/Linux designed for landscape photographers.
It shows you the exact direction of where the sunrise and moonrise will be at any particular location and time using Google maps. Landscape photographers typically wishing to plan their shoots around the times of sunrise/sunset or twilight, or alternatively when the moon is in a particular place or a particular phase. Click on the logo to learn more and download this free program.

When the world’s pyramids were built, their longitudes were reckoned from a very ancient Prime Meridian (0/360° longitude) that ran from pole to pole across the Great Pyramid at Giza, Egypt, a full 31 degrees, 08 minutes, 00.8 seconds to the east of our modern Greenwich Prime Meridian.
In order to “read” our western pyramids this 31° 08′ 00.8″ longitudinal variance must be factored in to our present-day longitudes for these western monuments.

The Greenwich Prime Meridian offers no distinguishing scientific – geological, geographic or other natural – features to make it the logical choice for the 0 longitude, but that is the earth’s prime meridian used by all cartographers to this day. 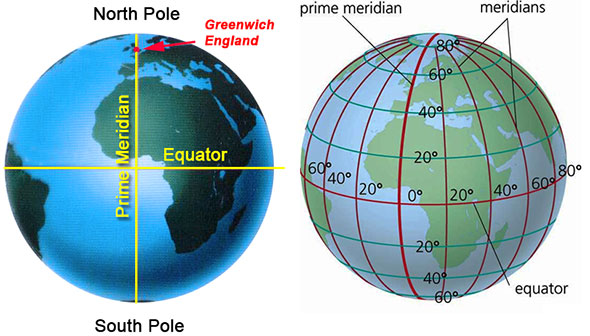 Carl Munck’s work is extensive! Here’s but one pyramid decoded. (For the purposes of posting this on our Web page, Carl chose one of the simplest monuments to decode.)
What follows is copyrighted Carl Munck 1996:

Like the other pyramids of the Western Hemisphere, the Kukulkan Pyramid at Chichan Itza was a terraced monument as opposed to being a true pyramid form such an we see in Egypt. There were clear reasons for this departure from Egyptian architectural practice because in the West, pyramids convey specific numbers which can enable us to see why they were built where they were upon the earth.

CORNER VIEW FROM THE GROUND

KUKULKAN PYRAMID at Chichen Itza on Mexico’s Yucatan .
Also known as the El Castillo (The Castle) and Quetzalcoatl,
Kukulkan Pyramid has staircases on all four sides.
With each staircase comprising 91 steps, the four
show 364 steps with the upper platform being the 365th step.

In this 3/4 view from ground level, notice that the pyramid shows us nine terraces.
This, the first number we use to assemble our formula for the decoding process.
The second number is 365. Kukulkan has four staircases, one on each side of the monument, on each staircase are 91 steps.
For the four, that totals to 364 steps with the top platform of the pyramid being the 365th step.
We now have our second number – 365.

In the overhead view, we see that the pyramid has four sides, and four staircases. We now have all the numbers shown by the architect and can put the decoding formula together:

When the world’s pyramids were built, their longitudes were reckoned from a very ancient Prime Meridian (0/360° longitude) that ran from pole to pole across the Great Pyramid at Giza, a full 31 degrees, 08 minutes, 00.8 seconds to the east or our modern Greenwich Prime Meridian. In order to “read” our western pyramids this 31° 08′ 00.8″ longitudinal variance must be factored in to our present-day longitudes for these Western monuments, viz:

Hence, those other three numbers of 119, 42, and 10.51620648 shown above, are the elements of Kukulkan’s original longitude which multiply to its GRID longitude which was left to us in the 4-4-9-365 message conveyed by the Kukulkan itself.

The Great Pyramid of Giza 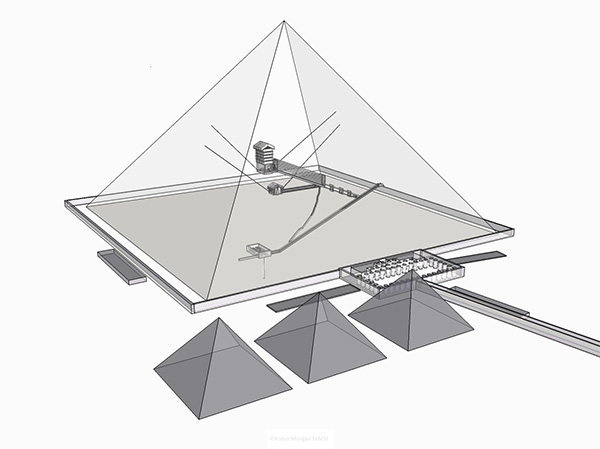 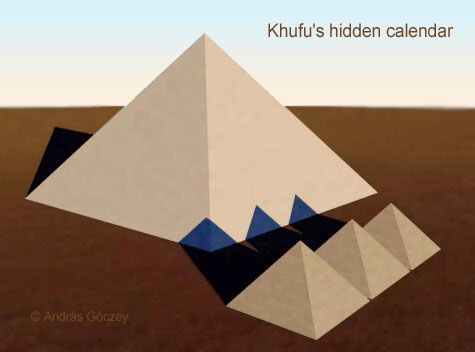 Now let’s look at the coordinates of the Great Pyramid: 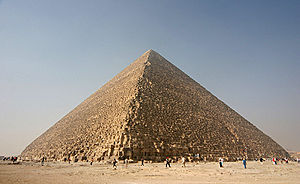 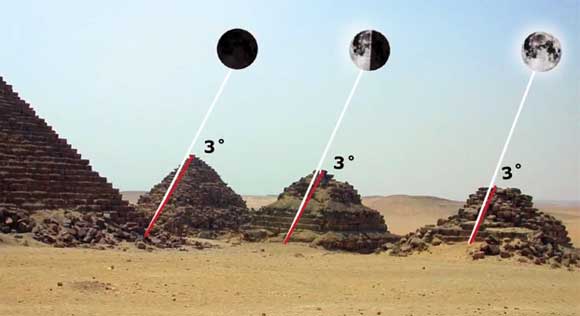 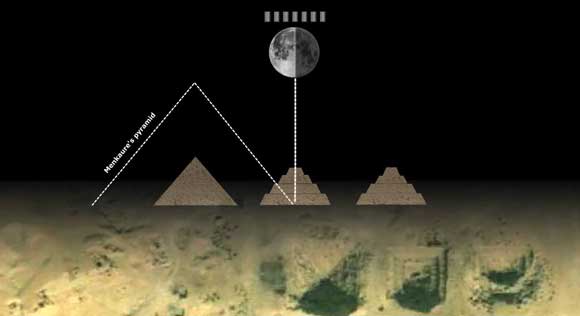 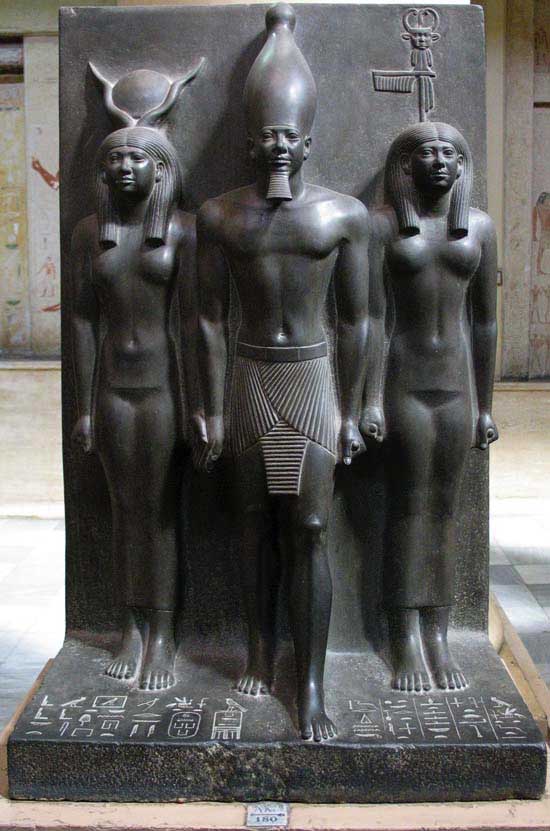