SPOILER ALERT!
IF YOU WANT TO GO INTO THE FILM UNAWARE…DO NOT READ THIS ARTICLE!

What happens when we die?  Where do we go?  Who made us and why?  These are some of the questions that motivate the crew of the Prometheus.  The long-awaited return of director Ridley Scott (Gladiator, Blade Runner) to the world of Sci-Fi has finally arrived (sadly at a time of the death of Ray Bradbury).

Soon after landing, an Away Team uses vehicles and explores a ‘structure’ that resembles an artificial mound they later call a ‘pyramid.’  Inside the hollow structure, the team finds that something is generating breathable air.  A long dead, Engineer giant is found decapitated by a large door.  David, the android, opens the door and more goodies are uncovered such as hieroglyphs; a monolithic head; a grand mural and the actual head of the fallen Engineer.  Thousands of flat-topped canisters are also discovered with something in them.  These are the seeds of the alien (virus).  But, what is the alien?

The Away Team takes back the ‘god’ head to the ship and barely escapes a violent storm.  We have seen the head before.  It is the ‘Space Jockey’ from ‘Alien’ that appears as a truncated elephant’s head.  Later, Shaw makes the awesome discovery; THEY ARE TRULY OUR CREATORS!  The DNA checks out; we came from them!  They also realize that the elephant-like thing is only a helmet.  When it is removed, we see the Engineers’ real appearance.  They are very large, beautiful, bald humanoids.

What happened to the Engineers on this deadly moon long ago?  An old Engineer hologram is activated.  The bald giants were running from SOMETHING?  David, like the Ian Holm robot in the first film, protects the alien…and now, the Engineers.  The android takes back a sample of the virus from the ‘vase’ canisters as the doctors make their discoveries with the Engineer head.  Later…an excellent scene occurs between Holloway and android, David:

[The robot asks the purpose of the mission.  The doctor responds with ‘to meet our Makers’ and get answers.  The android asks Holloway, ‘why did Weyland make me?’  Holloway replies, ‘because he could.’  David comments with a question, ‘would you be disappointed to hear that from your Creators?’  He also asks the scientist, ‘how far would you go to get your answers?’  The man says, ‘I’d do anything and everything.’ They toast.  David gives Holloway the alien virus in the drink.  He is slowly infected].

Holloway then has sex with Shaw.  He asks her one of the big questions; ‘why have the gods abandoned us?’  She almost instantly becomes pregnant with the accelerated, alien fetus.  By this time, two crew members have been stranded by the storm.  Snake-like forms of the alien attack them.  Ever since the Away Team entered the high structure, the virus is no longer dormant.  They find broken canisters as if something squirmed out of them.

When they return to the ship, Holloway is visually affected or in the process of changing as Shaw freaks out.  Charlize Theron does not let him back on board.  As per his request, she torches Holloway with a flamethrower.

David is alone and has turned off his monitoring devices.  He enters the gigantic room of the Space Jockey without its driver’s seat.  Another Engineer hologram from the distant past is activated.  The android sees a marvelous display like a vast, galactic planetarium.  Earth is singled out as David puts together the real purpose/mission of the Engineers.  He makes another big discovery; one of the Engineers is ALIVE and laying prone inside a sleep-chamber!

David returns to Shaw and knows she is pregnant with the alien.  She fights off other doctors and enters an adjacent medical facility.  Shaw activates an automatic machine which can perform a cesarean operation.  The mechanical device removes the alien from her stomach, which resembles a spastic octopus.  She is stapled together and makes her way out.

Corporate head Weyland has been alive and onboard all this time; kept in a stasis chamber.  The old man fears death, which is the prime reason he funded the mission and had Prometheus built.  He wants answers from his gods.  He wants more Life.  ‘If the Engineers created life, then maybe they could save it?’

The Captain has an interesting theory.  His view is the Engineers do not come from the moon.  Here was a testing ground, possibly military, for the VIRUS-WEAPON.  But, something went wrong and it turned on the giants.  The Captain swears to destroy Prometheus before he lets anything alien return home.

David explains to Shaw the true purpose of the Engineers.  They were about to depart and release thousands of virus canisters on Earth.  The android answers her question (‘why?’) with, ‘sometimes to create, one must first destroy.’

David, Weyland and Shaw go to the large/round Space Jockey room to greet God or one of the gods still alive.  The android believes he can communicate with the cosmic creature.  David awakens the silent Engineer who sits up from the chamber and stands.  Shaw, fully aware they were so wrong about everything, yells the question ‘WHY?!’

The Engineer proceeds to rip David’s head off and kill Weyland as Shaw runs out in terror.  The bald giant initiates a long overdue departure sequence.  Its helmet returns into place.  The enormous Engineer ship (curved-bone craft in first film) in the structure begins to separate; preparing to leave the moon.  In a few moments the massive vessel will be gone.  God will be on its way to kill its creation of life on Earth.

Shaw escapes to the surface and radios the Captain of the Prometheus.  She convinces him that the rising ship brings only DEATH to Earth.  The Captain crashes Prometheus into the Engineer ship of the gods as they explode high above the moon in that great scene from the trailer.  Company-woman Charlize Theron also escapes, but is crushed by the falling ships.  Shaw barely survives, however; she does escape…the only survivor of the Prometheus (like Ripley in the original movie).

The enraged Engineer survives the crash and goes after Shaw who is now in a section of Theron’s fallen ‘lifeboat.’  Behind a hatch, she sees the much grown (alien-octopus) thing that incubated inside her.  Obviously, Weyland Corp. had their own agenda for the alien.  As the giant Engineer rushes at her, she opens the hatch and releases the monstrously huge alien.  It subdues the bald giant and forces its egg-laying tentacle down the Engineer’s throat.  (The original ‘Alien’ contained what was considered the most horrific scene ever put on film, which was the dinner scene after a face-hugger was removed from John Hurt’s character.  Prometheus’ climactic scene of a giant-sized face-hugger pushed down the Engineer’s throat was nearly as horrendous). 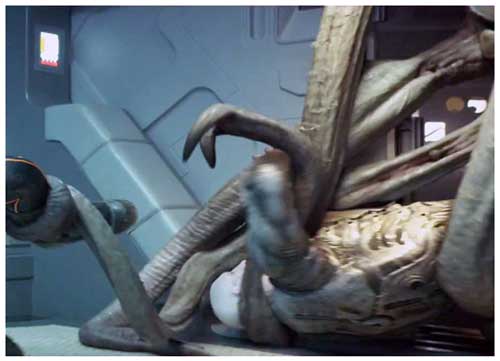 Shaw is in despair.  She is sure she can never get off the moon.  Suddenly, she receives an audio communication from David.  The android is fully functional except for his mobility.  He is only a decapitated head on the floor.  Shaw does not know why she should help him.  David explains there are other ships on the satellite that he could pilot.

She agrees and they join forces.  Her faith is renewed as she places her father’s cross back around her neck.  Instead of going to Earth, she wants to travel to where the Engineers exist.  The android tells her he could navigate them to their world.  She is still searching for answers…as (probably) what will be the Queen-Alien (seen in the sequel) bursts out of the Engineer’s chest.

WHAT DID IT ALL MEAN?  I felt mesmerized; like after I saw the film ‘2001.’  Did we have such a high opinion of our species; nowhere close to reality?  Was God silent because the human answers we want to hear are not the ones forthcoming?  Were we nothing more than paramecium in a Petri dish to the gods?  Were we not worthy of a single atomic particle of a reply or answer from our Creators?  Are we something at the very bottom of the cosmic trashcan?

Surely not; well…we LOOK like the gods, anyway.  It was a fun film.  The questions that Shaw really wanted to know were: ‘They created us; then, tried to destroy us.  Why did they change their mind?  And, who created the Engineers?’

What blew my mind was…we have the nasty Alien-buggers to thank for interrupting God’s plan of destroying us!  Ain’t that a kick in the head?  Kind of changes our view of the original Alien now; doesn’t it?

Read my ‘Talking to a Sea-Monkey’ [ http://www.world-mysteries.com/sci_6doug1.htm ] – a short story on World-Mysteries.com site.  Is our world nothing more than an alien’s experiment?  And, an alien child’s Elementary experiment at that!

More Information about the movie:

PS3 An alternative opinion what the “Prometheus” movie is about: