Deoxyribonucleic acid (DNA) is the basis of life. It contains the code necessary for the transcription of RNA, which is translated into proteins. The DNA code consists of a sequence of four bases in two complementary chains forming a double helix. The human genome, which is our entire DNA library, has roughly 3 billion bases encoding approximately 20,000-25,000 genes, which are segments encoding a particular RNA and protein.

To study DNA, the portion of interest has to be isolated or amplified in order to have enough material to detect with analytical methods. The polymerase chain reaction (PCR) is a technique that uses the cell’s own DNA replication system to isolate a section of the genome. PCR is used to determine if certain genes are present in a DNA sample and to create enough DNA for sequencing or cloning. This has also been adapted into real-time quantitative PCR (qPCR) in which a computerized system monitors a fluorescent tag to determine the concentration of the particular sequence of DNA, as well as RT-PCR, reverse transcription PCR in which RNA is converted to DNA prior to PCR in order to determine the activity of a gene by measuring or determining which RNA is present in a sample. 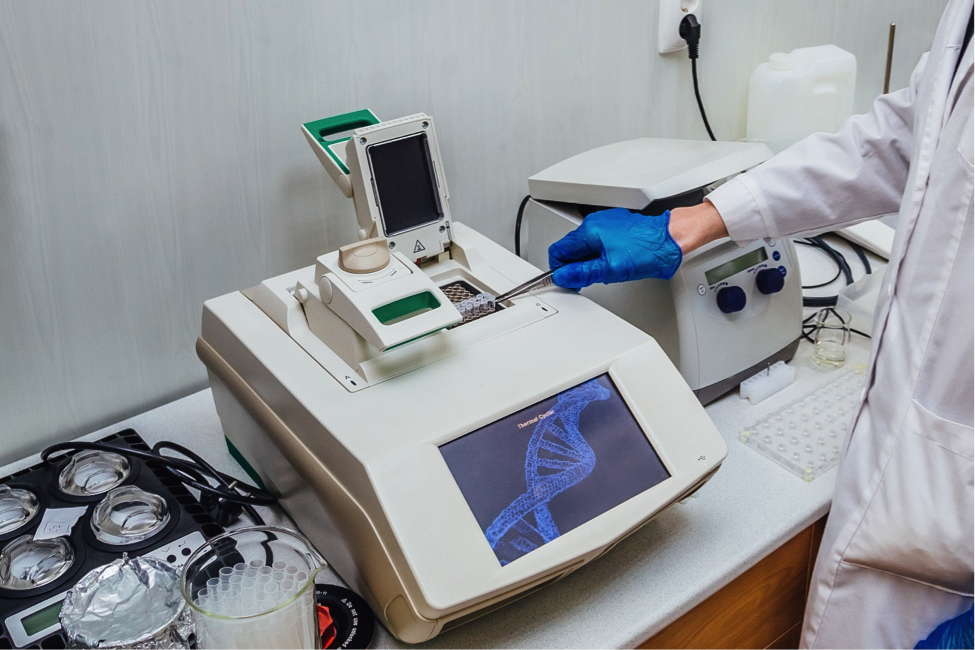 As its name implies, PCR is a chain reaction resulting in the polymerization of DNA. A sample containing DNA is added to a reaction mixture that has been made based on a recipe. It is a mix of buffers, enzyme (polymerase), and primers – small pieces of DNA in the sequence of interest. This mixture is cycled through temperatures that activate and deactivate the enzyme allowing the DNA pieces to separate, anneal, and elongate.

The major breakthrough in PCR technology was the discovery of the Taq polymerase in bacteria that lives in hot springs, Thermus aquaticus. The polymerase is heat stable and withstands the temperatures needed to separate the double stranded DNA strands. Previous to this, researchers were required to add more enzyme to each cycle of PCR, sometimes requiring their attention for hours on end. Current commercially available Taq is isolated from E coli bacteria that carry the gene for the enzyme.

Thermocyclers now cycle small tubes of samples through the heat and cold of denaturation (strand separation), annealing (primer binding to initiate a location for polymerization to begin, normally 72 degrees Celsius), and elongation (polymerization of the DNA strand from the primer to the end of the strand) using up the primers and reusing the enzyme. The elongation is eventually blocked by the loss of material where the other primer bound previously, resulting in a DNA fragment of specific length as newly created DNA is used as a template more than the original material. This amplifies the number of DNA strands logarithmically.

To amplify large portions of DNA, many primers are used to create multiple polymerization start sites. To amplify portions of a single gene, as few as two primers are often used, one in the forward direction and one in the reverse, each binding to one of the two strands of DNA. By the end of 30-40 PCR cycles, there should be enough DNA to run the PCR mixture on a gel and visualize the size of DNA strand amplified. Because the sequence of the primers was known, the researcher can determine if the result is positive or negative. If the researcher is aiming to determine differences in the samples, the DNA can then be used in further testing and purification procedures.

In qPCR, fluorescence labeled probes are also used with the primers. The fluorophores emit fluorescence as the polymerase elongates the DNA strand and is measured by specially designed computer software. When calculated in correlation with the number of cycles it is possible to determine the quantity of starting material. With real-time quantitative RT-PCR, a researcher can measure how much of that particular sequence is in the sample based on its rate of amplification and compare it to other genes. Many fluorescent probes can be used at the same time allowing for a visual to be developed regarding which genes are on or off in an organism or subject.

The applications of PCR include, but are not limited to:

Of course, this topic is very difficult to perceive. If you need an essay on this topic, you can order it here.