Positions of the planets can be used as a perfect clock. Such a clock can mark date in time (in the past and/or in the future) which can be read by intelligent beings regardless of their language and calendar they use…

Note: This post is an update to our very popular post 2012 and the Pyramids at Giza… by Charles Marcello

Whether you believe something will happen in 2012 or not, is not important…

What will happen in the night sky over Giza mimics the layout of the Pyramids at Giza! The fact is that the planetary alignment matches exactly layout of  Pyramids at Giza on 12.3.12 and this will happen just 18 days before 12.21.12.  … 6 plus 6 plus 6 = 18… Even the most ardent skeptics have to admit, that is one hell of a coincidence! 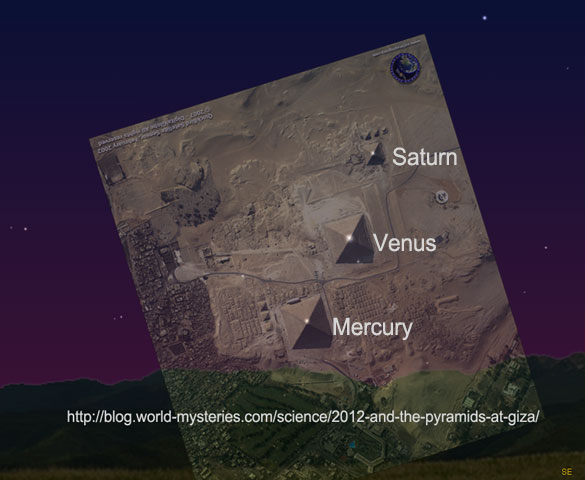 Planetary alignment that will take place Dec 3, 2012  is dead-on alignment with the Pyramids at Giza.

I just made this video which checks the alignment of 03 December, for those interested in the subject.
If someone finds an identical configuration [for another date] and check-able in the same way, I gladly offer him a bottle of good champagne!
No interpretation, fear of any kind, no expectation, or any delirium, just see it !

The documentary “the revelation of the pyramids” advance the same theory, that the site of Giza is a cosmic clock with sphinx facing east, where sun rises with the configuration of the next December 3rd.

THE DISCOVERY THAT CHANGED THE WORLD
Mystery has surrounded these epic structures for centuries with theories varying from the scientific to the bizarre. However with over thirty-seven years of in depth research taking in sites from China, Peru, Mexico and Egypt, one scientist has as at last managed first to understand and then to reveal what lies behind this greatest of archeological mysteries: a message of paramount importance for all mankind, through time and space.
Narrated by Brian Cox, and based from the book of Jacques Grimault.

Your Comments and Feedback are welcomed!