“This started as a documentary about military robots and ended up more like a science fiction film,” says Remote Control War director Leif Kaldor. “The technology is almost unbelievable, yet very few people know there are thousands of robots on the battlefield right now, let alone what the next generation of lethal, autonomous robots will be capable of.”

“When a leading roboticist tells you he wouldn’t be worried if we had Terminators because he’s far more concerned with the lethal, autonomous flying robot ‘swarms’ that are being developed and tested right now, you know this is something we’d better be aware of and talking about….soon!”  – Leif Kaldor (This Documentary Co-Producer)

Robots that kill. In the movies, this scenario is presented as a future in which things have gone terribly wrong. But, as revealed in the new Zoot Pictures documentary Remote Control War, such robots are no longer science fiction.

From today’s CIA drone strikes to the next generation of armed autonomous robot swarms, killer robots are about to change our world. The question chillingly posed in Remote Control War is how this shift will affect not only warfare….but mankind.

Robotic war is already here. Every evening in Indian Springs, Nevada, an hour outside of Las Vegas, a group of ordinary-looking men and women say goodbye to their families and go to war. They fight insurgents in Afghanistan and on the mountainous borders of Pakistan. They watch, they bomb, and they kill. Sometimes their vehicles crash, but the pilots always go home to their families in the morning. They are remote control warriors.

Remote Control War illustrates how warfare is being revolutionized in a monumental shift unlike anything in our human history. The current campaigns in Iraq and Afghanistan exemplify the world’s first Robotic War.  The American robotic fleet, almost non-existent when the US and its allies invaded Iraq in 2003, has today grown to number 7,000 robots in the air and 12,000 others on the ground.  Some 43 other countries, including Canada, are now using robots in combat.

Military robots are appealing: they save soldiers’ lives – avoiding the negative publicity of planes repeatedly returning home with flag-shrouded coffins.

But, as Remote Control War shows us, today’s drones and robot tanks are like “the first horseless carriage” compared to new generations of robots already being developed. Robot warriors will soon move beyond taking directions – they will become autonomous, acting independently. Surveillance and other non-lethal tools will be turned into attack weapons, as the military reconfigures today’s R2-D2 and C-3PO into RoboCop and Terminator. We see in the film how this is already happening.

Remote Control War producers Leif Kaldor and Leslea Mair of Regina-based Zoot Pictures (read an interview) hunt down the most up-to-date information on military robotics. They travel to Europe, Israel and across North America, gaining entry to the Pentagon, robotic production facilities and cutting-edge research laboratories. While discovering the latest technology, they pose the serious ethical questions we need to ask: When robots are used to kill human beings, what are the new rules of engagement?

Robots only have the ethics with which they are programmed, and human/robot wars raise many ethical questions.  Does the ability to kill anyone, anywhere, using a robot, amount to lawlessness?  What happens when future robots can decide, on their own, whom to kill?  Would the military send out an autonomous swarm of micro-robots to kill an enemy?  Will having no casualties on your own side make going to war too easy a decision?

The development and deployment of militarized robots also opens a Pandora’s Box. Currently, the West has the upper hand, but very soon, all sides will have access to remote control weapons.  In that frightening scenario, will robots become the future’s suicide bombers?

To contribute to our understanding of what is going on right now in the world of military robotics, and the implications of these developments, Kaldor and Mair talk to such knowledgeable experts and insiders as:

Produced by Leslea Mair and directed by Leif Kaldor for Zoot Pictures in association with CBC-TV. 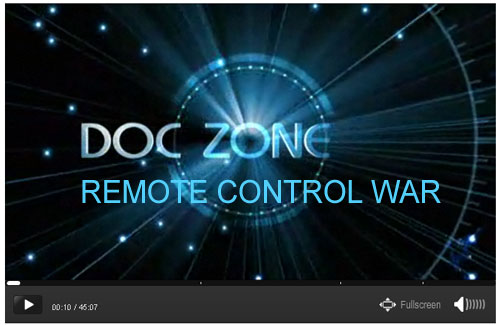