Scenario for Contemplation:
Our Past Expedition in This Part of the Universe

By Ron O. Cook
The following is a fragment from a Meta-Fictional Book that I wrote. It is designed to offer a point of departure for future thought to open up our minds to what may be possible in our past.

I am the message bearer from Timelessness to Time and through the Portal (Goge) in Space / Time to you for whom playing with illusion is a preoccupation, rather than a means to union with the One and Absolute. To these means of transfer, I am deeply dimensional in meaning and serious of mentality.

The destruction expressed by the Leche, destroyed the Enmayi planet (your old home world) in total. Its ada-son, source of deep space light, called Egog was reduced to its chemical basics by the force of the gargantuan discharge. It is now the fifth planet from Goge as yours once was. As Egog’s fire was snuffed out, so were the lives that resided near its Light giving exchange of broadcasting virtual data for you to utilize in this school of learning. The fourth planet, my virtual home world in this illusion, was rendered atmospherically dead by a rain of Enmayi asteroids; leveled were our civilization’s offerings-in-being to the All. Our hydros resources were lost to the cold of space — though we needed them not to exist, rather to serve esthetic purposes. Most of my relations were converted into the realm of limitless pursuits in the reality of being. Their initiations are now complete at this level.

Few of us escaped, as did your relations (virtually you) who arrived on this Gardened Planet over four million orbits ago. We, Omegons, were here to greet you and help you to build great civilizations in the glorious Valley Regions. There your civilizations survived numerous catastrophes with us for this world dies and reawakens periodically. The Valley Region was highly protective for millions of orbits. It was the most beautiful and sheltered of all areas upon this place of moving landscapes. As your offspring (virtually you) became genetically developed for this atmosphere you ventured out to explore the surface of a world saturated in hydros. During periods of destruction, your mentality, too strong in emotional passion and ignorance of the Alphian ways, destroyed (physically removed) almost all Omegons who helped you. However, we have survived (we do not die) in many places hidden to you, including Time and Space. It is our duty to enlighten you to return to your past glory, with us in our final initiation. 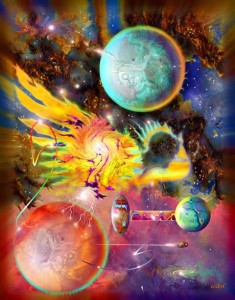 Most of us reside on a moon of the fourth planet, where the churning blast of your weapon, did not touch us. There, we intercepted the jettisoned craft with Claronu’s Enmayi survey intact. Those few of us who survived have returned periodically to our old world and live under its surface. A few hundred of your relatives had earlier made it to the Garden Planet, prior to the accidental ignition of the Leche, on exploration teams sent by Koan and Planca. They had apparently figured on making it a colony of the Enmayi. The resources of the third planet for an Alphian being’s existence are ideal. Claronu was not aware of this happening though scepter’s records show he could have been before transcendence. We have attached this data along with the survey for your use at the time of humanity’s arrival at Omegon initiation to soulular finality and growth. To some of us it is known, that this is the strategy of the One and All for this sector’s total development. It is the Crux of Being.

By now, many of you have forgotten your roots in this gargantuan projection of being in this the realm of the Moiré Arena — virtual assemblage vehicle in Time. This record is for you to search your inner selves for the truth that will show itself relevant to the reality that you have experienced while on the Garden Planet.

Now, many orbits have passed since you were first saved on this world of beauty and chaos. Its periods of renewal have caused you to forget all the old traditions, yet we Omegons and three of your own, who had been bestowed the Light, Koan, Planca and later on the third planet, Takion; have reintroduced the knowledge to you each time. The planet, upon which you reside, is indeed one of special planning by those of us who see from a higher vision. Yours is a special test of ultimate Omegon initiation. We are the last forms of what you will become in the very near future. Your current Alphi/Omegi phase is ready to move to a higher structure as is signaled by your mental ability to decipher this message. One catalyst will move you all to this stage — an event of tremendous importance is about to take place. Yours will be a higher body, mind, and spiritual responsibility to the Otherworld. You are special, as your test will be of the highest difficulty, and unmatched for mental stress. Pain will be supreme to all those who glory in the highest knowledge about to be yours. Prepare mentally for understanding of Chaos in the form of a Super-Moiré Arena.

Much has happened on “your” world in initiation, since you arrived many millions of orbits ago. Times were hard for your species, and for the few Omegons who greeted you and taught you early on. You succeeded in physically killing those Blessed Shepherds who could not be killed easily for they seemed immortal to your perceived mortality. It took you many cycles of the precession and pattern of alignments of the system of Goge to eliminate these fine beings that you called “Gods.” Though they led perfect lives, and you looked up to them as supreme beings, you feared their powers and sought their means of constant life. That immortality belongs to us all for it is our heritage and has always been our gift. Now, as you are ready, you shall become as we, in your final test, for you are us. (Let not the “twain” or their magical traditions tell you any other).

Have no fear, for those Omegons you have deleted are not dead, but their monadic spirits are safe for they are totally worthy and learned in the workings of limitlessness, where they reside with the One with no second. Some still dwell secretly among you reincarnated for special terms as the “Watchers.” They are the Seers who shine when sought by the few who are already awakening to the Truth of Being. They will lead you to the Catalyst Times.

Omegonship is to go beyond death concepts, for being thus, one changes into elements that are essentially minds in unison and localization with the All, yet are in this kingdom of Time. An example of singularity in mentality, is the simple fact that you all experience this virtual realm at the same instant in Time. There is no deviation. You may not know of immortality if you do not learn of becoming. The Light that is the animator of your form will live forever to be again and again. The mind that is you is a shared localization, holospiritedly connected to all mind in the Time bound virtual worlds, which are built from Timeless realms where reality truly dwells.

You may live over and over again in various conditions determined by your own actions. This, until you catalyze and move into the final phase of material existence. Life is like your schools of learning, where testing is temptation with the law of cause and effect couched in the laws of consequence. You build your own inferno. Your merit builds the future intellect toward knowing why there is only unconditional Love at the highest forms of being. One must grow to survive as part of the whole where Eternity dwells. To do this, and become whole is easy if one knows whereby selflessness is converted to Light. It is the Dialogue necessary for lucid union in coherency. To the very selfish, unconditional Love is more difficult than all the trials of being. The narcissistic vibrate within tiny feedback loops of obsessive compulsion to reach total recognition of self-love or self-god. Self-god is a non-condition when there is no place to exist other than yourself. We are in this together. To receive recognition in the physical world at one’s own effort is an illusion called false – play. It is a fallacy because it is a collusion of mentality to sustain an aberrant being within groups or even nations that breed other beings with the same condition.

The message of Claronu is simple, yet complex. To believe it will be your decision, for free will is what this experience in creativity is all locked upon. The purpose is like asking yourself, “what did I learn?” That will be your first message when you awaken localized in the All. One cannot evade this test by self-determination to exiting; it is not yours whereby existence is even your vehicle. You are not the vehicle, my friend. Being is to know the Law of existence as caused and effected within the Consequences of your acts. Every act that you perform in this sequential realm of leveraged being has projected future results, unless negated by unconditional Love. Prayer or meditation or deep thought helps negate such sin as it is an act of localization in unconditional Love. Forgiving is grace, or coherency of phases.

Consequences have a way of building up in the Alphian and Alphi/Omegi forms. Life, then becomes very hard and will consume the being into frustration if total consciousness is not retained in supreme focus. To dull the senses, will pull one ever deeper into the Alphian person who resembles a predator. Some have gods that are eaters of beings, for they think life is all consuming rather than a place to visit and become. Do not mistake in judging those who offer unconditional Love, for it is whereby coherency is attained — to judge then is not to see Light in flux of total beauty. Judge not, but join the brave souls willing to be judged for their own act of righteous prophecy.

Love is complex, but it is the most wonderful tool to conquer fear of the unknown. It is the leveler and controller of chaos in the projected universe. Even chaos is but unperceived Love at some levels. Unity reveals itself in many forms. But, think not on these aftereffects, but think upon whereby they even are possible. If you are brave enough to judge, then like judgment will be handed to your spirit. The judging entity must be confident in his own being, just as the All is confident in his making virtual worlds whereby judgment can even be leveraged for better structural development in the soul.