Opposite of the Atomic Bomb

Eighty years ago, MEN developed and unleashed a hideous ‘monster’ upon our world called the Atomic Bomb.  Einstein wrote of nuclear feasibility and the Bomb should be built as a deterrent to WAR.  I mean; who would dare wage war in an age of such awesome destructive power?

We can debate the making of the Bomb until the ‘cows come home.’  The point of this article is to simply relay that these ‘MEN’ would rather play with toys that could destroy our planet before they will develop and unleash the OPPOSITE; a means to give human society not ‘energy from matter,’ but matter from energy!

Nuclear Power might stop a World War or shatter a Doomsday Asteroid, right?  What could be wrong with making it or its Big Brother, the Hydrogen Bomb?  Many viewers will probably defend the development of Robert Oppenheimer’s ‘baby.’  They would know very little of the horrors under years of atomic warfare, clearly described in ancient texts of India as well as the Bible.

Japan and Germany would have surrendered just the same if one UNINHABITED island had vaporized!  This writer can call the builders of the Bomb ‘MADMEN’ for the following reasons:

* As above paragraph mentioned, SAME RESULT…the Second Great War would have ended if an uninhabited island was obliterated.  These ‘men’ wanted to proudly test their destructive achievement by melting the flesh off an entire city’s populace that also included innocent women and children; how Biblical.  This was not a heroic act…but one of great, great (evil) cowardice.

* THEN, they repeated the horrific sin…by doing it again!  The unspeakable Crime committed at Hiroshima was repeated AGAIN at Nagasaki.  Before readers defend ANYTHING and EVERYTHING the U.S. (really United Kingdom) does…answer this:  ‘Would you defend a third, Japanese city being nuked?’  ‘Why was Germany untouched by the Atomic Bomb?’

* The first military tests of this ‘wonderful’ TOY called the Bomb were done ABOVE GROUND!  Just contaminate the air and water which also gets into our food, why don’t you?  (sarcasm).  Later, some official had the brilliant idea, ‘maybe we should test nukes UNDERGROUND?’  Heck with ‘Gaia’ and our beautiful planet or the possible increased earthquake activity or radioactivity this might cause!

* The MEN did not stop with the Atomic Bomb.  People like Edward Teller wanted something bigger and better.  They developed the HYDROGEN BOMB; a Power hundreds of times more destructive!!

* Before atomic testing went underground and in the ‘innocent’ days of soldier-robots doing anything their superiors ordered them to do (Oh, wait…it’s the same today)…our troops were ordered to APPROACH and charge INTO  radioactive Mushroom Clouds!  You can see old films of naval ships with men onboard and infantry troops; basically, consumed by the Flash and Force of atomic detonations.  In some cases, the obeying soldiers were protected with only SUNGLASSES.

See if you can get your hands on a disk or view the film called BEYOND TREASON ‘The U.S. Government’s Long History of Conducting Deadly Military Experiments.’  They tested and exposed soldiers to radioactive dangers without their knowledge or consent with disastrous consequences.

* Islands were taken from natives no different than when the U.S. stole the land from the Indians.  In most cases, these lands were sacred.  Numerous tribes were forcibly removed only to witness their ancestral homes NUKED.  Their islands weren’t there anymore.

To repeat, not the point of the article to blast nuclear blasting…as horrific as it is.  (There are far superior means to acquire Electricity than the ‘dirty, dangerous’ method of Nuclear Energy, so said Nikola Tesla).  THE POINT IS:

The exact opposite of the awesome, destructive power of the Bomb is not fantasy.  The old, scientific principle of Matter from Energy is as credible and realistic as a lot of Energy from a little bit of Matter.  Physicists know that Transporters are possible and moving at light-speed.

Our parents and grandparents were well acquainted with the Bomb.  But, we are very UN-familiar with the OPPOSITE OF THE ATOMIC BOMB.  A Positive/Constructive Power going off is unknown to us, but we all are aware of Mushroom Clouds and radioactive fall-out…

Something from Nothing sounds like magical fantasy.  But, you understand the instantaneous annihilation of physical reality and the awful poisoning of the environment; interesting.

Now, everyone has the Bomb.  Einstein who held anti-war banners that read ‘One World or None!’ would see an insane, nightmare Earth of today.  Nations appear like an atomic powder keg only waiting to explode!

If only quantum leap technology was allowed to exist on Earth.  When?  Possibly, one day, realistic and scientific dreams will be permitted to come true. 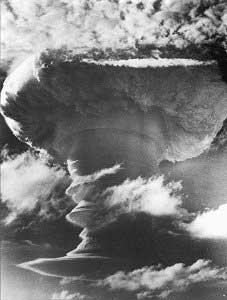 PS What is the difference between a hydrogen bomb and an atomic bomb?

Must I be stronger – or can we work it out?

Of course any reasonable person would want to be friends, wouldn’t they? Especially with so much at stake… but we’re not talking about reasonable people here. Atom bomb advocates are sick people whose life is rooted in insecurity, paranoia, mistrust and above all power-lust.

The bombs of Hiroshima and Nagasaki need never have been dropped. They were not necessary to end the war in the Pacific but dropped by the US military to impress the Russians engaged in joint discussions over the future control of Europe. Also as a ‘live’ test of killing power. This is the horrifying conclusion of Gar Alperovitz’s astonishignly well referenced book ‘The decision to use the atomic bomb’, an absolute must for any serious atom bomb scholar. 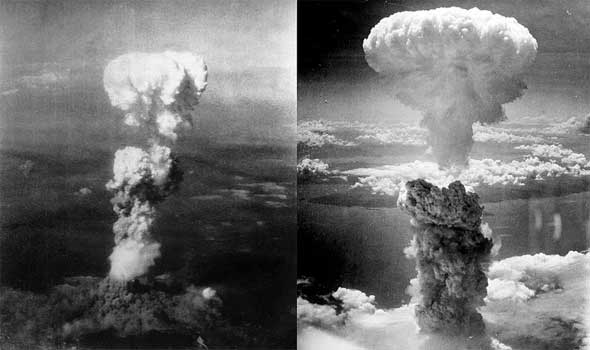 Left picture : At the time this photo was made, smoke billowed 20,000 feet above Hiroshima while smoke from the burst of the first atomic bomb had spread over 10,000 feet on the target at the base of the rising column. Six planes of the 509th Composite Group, participated in this mission; one to carry the bomb Enola Gay, one to take scientific measurements of the blast The Great Artiste, the third to take photographs Necessary Evil the others flew approximately an hour ahead to act as weather scouts, 08/06/1945. Bad weather would disqualify a target as the scientists insisted on a visual delivery, the primary target was Hiroshima, secondary was Kokura, and tertiary was Nagasaki.

The arms race was (and is) driven by the U.S.military-industrial complex, without the consent of the U.S. people. Arms are consumer durables and the second hand market in arms is terrorising ordinary people right across the so called ‘developing world’. Again, in the South, its the corrupt politicians that buy those arms not the people. [ from Hidden history: The Hydrogen Bomb Homepage ]