ON THE COLDEST DAY IN AMERICA IN 20 YEARS, HERE ARE AL GORE’S STUPIDEST GLOBAL WARMING QUOTES

America could actually use some global warming right about now.  It is being projected that low temperatures across the Midwest could be 30 to 50 degrees below average on Monday morning.  On Sunday, fans that attempted to tailgate before the playoff game between the 49ers and the Packers at Lambeau Field in Green Bay, Wisconsin were discovering that their beers were actually turning to ice before they could drink them.  That is cold.

The last time that happened was back in 1997.  The reason why the governor of Minnesota did this is because when temperatures get this low they can literally be life threatening.  When wind chill temperatures get down to about 50 below zero, if your skin is exposed you can literally develop frostbite in about five minutes.  This is being called the coldest day in America in 20 years, and these cold temperatures have many Americans wondering what ever happened to all of that “global warming” that Al Gore and other “climate scientists” have been warning us about for so many years.

If the planet really is getting significantly warmer, our winters should not be like this.  Back in the year 2000, one prominent “climate scientist” boldly declared that future generations of children “just aren’t going to know what snow is.”

The truth is that you don’t have to be a “climate scientist” to understand what is happening to the weather.  All you need is a little common sense.

Back in September, I warned that this was going to be “an extremely bitterly cold winter“.  I wrote another article that warned about how cold this winter would be in early December.

Right now we are witnessing cold temperatures that we have not seen in decades.  The following is the way that one meteorologist put it…

“A person not properly dressed could die easily in those conditions.”

To get an idea of just how cold it is up in Minnesota today, just check out the following anecdote that was reported by the BBC…

Firemen tackling a blaze in Minneapolis, where temperatures have been below -20C, saw the spray from their hoses turn to ice as it hit the building.

And it is even colder up in Canada.  Things are so cold up in Ontario that “frost quakes” have become very common…

While America collectively freaks out over their impending ‘polar vortex’, Canada is changing the game when it comes to cold weather phenomenon as reports of ‘frost quakes’ emerge from around Toronto and Ontario.

Indeed, as temperatures drop overnight to around -4f around the city hundreds of people are being startled by hearing large booms – causing them to think their homes are being broken into or gunshots are being fired.

In fact, they are merely hearing the after-effects of the frost quakes – or cryoseism – which are more commonly found on a glacier in the polar regions.

So are we really experiencing “global warming”?

If anything, things are actually getting colder.

What the United States and Canada are experiencing right now is making global warming alarmists such as Al Gore look quite foolish.  The following are 10 of Al Gore’s stupidest global warming quotes…

#1 In 2008, Al Gore boldly declared to a German audience that “the entire North ‘polarized’ cap will disappear in 5 years.” (Needless to say, that did not happen.  In fact, the ice cap in the Arctic actually got larger this year.)

#2 “CO2 is the exhaling breath of our civilization, literally. … Changing that pattern requires a scope, a scale, a speed of change that is beyond what we have done in the past.” (Actually, without carbon dioxide life on earth would not exist.)

#3 “The planet has a fever. If your baby has a fever, you go to the doctor. If the doctor says you need to intervene here, you don’t say, ‘Well, I read a science fiction novel that told me it’s not a problem.’ If the crib’s on fire, you don’t speculate that the baby is flame retardant. You take action.” (It sounds like what Al Gore really needs is more cowbell.)

#4 During a speech at NYU Law School in 2006, Al Gore made the following statement: “Many scientists are now warning that we are moving closer to several “tipping points” that could — within as little as 10 years — make it impossible for us to avoid irretrievable damage to the planet’s habitability for human civilization.”

#5 “Here is the truth: The Earth is round; Saddam Hussein did not attack us on 9/11; Elvis is dead; Obama was born in the United States; and the climate crisis is real.”

#6 “The interior of the earth is extremely hot – several million degrees.” (It actually peaks out at about 11,000 degrees.)

#7 “There is an air of unreality in debating these arcane points when the world is changing in such dramatic ways right in front of our eyes because of global warming.”

#8 “It would be an enormous relief if the recent attacks on the science of global warming actually indicated that we do not face an unimaginable calamity requiring large-scale, preventive measures to protect human civilization as we know it.”

#9 “The survival of the United States of America as we know it is at risk. And even more — if more should be required — the future of human civilization is at stake.”

#10 “We ought to approach this challenge [of global warming] with a sense of profound joy and gratitude: that we are the generation about which, a thousand years from now, philharmonic orchestras and poets and singers will celebrate by saying, they were the ones that found it within themselves to solve this crisis and lay the basis for a bright and optimistic human future.”

As time goes by, the scientific evidence continues to mount.  It is becoming painfully evident that the theory of man-made global warming simply is not true.  The following is from a recent New American article…

Well, 2013 is almost over, and contrary to the alarmist “predictions” by Gore and what critics refer to as his “doomsday cult,” the latest satellite data show that Arctic ice cover has actually expanded 50 percent over 2012 levels. In fact, during October, sea-ice levels grew at the fastest pace since records began in 1979. Experts predict the expansion to continue in the years to come, leaving global-warming alarmists scrambling fiendishly for explanations to save face — and to revive the rapidly melting climate hysteria.

In September, meanwhile, data also showed that sea ice levels in Antarctica had expanded to record levels for the second year in a row. Of course, by now, virtually everyone who has been following news about “global warming” — now more often referred to as “climate change” owing to public-relations concerns — also knows that global temperatures have not risen for some 17 years. The spectacular lack of warming demolished all 73 of the “climate models” used by the United Nations to push its controversial theories.

Sadly, most of the governments of the planet still consider “man-made global warming” to be one of the greatest threats facing us, and the U.S. government is leading the charge.  In fact, the U.S. government has been giving other nations billions of dollars to help them cope with “climate change”…

American taxpayers spent $7.45 billion to help developing countries cope with climate change in fiscal years 2010 through 2012, according to a federal government report submitted to the United Nations on a subject that Secretary of State John Kerry described as “a truly life-and-death challenge.”

When President Obama leaves office three years from now, the major policy story of his second term — barring some kind of unforeseen invasion — is likely to be climate change. I made this argument at feature length last year, and the evidence continues to mount.Coral Davenport reports today about Secretary of State John Kerry’s “systematic, top-down push to create an agency wide focus on global warming.”

Considering the host of other major problems that this country is facing, it truly is ironic that the federal government is spending so much time and energy fighting a problem that doesn’t even exist.

Satellite images have captured the progress of the big freeze that has gripped the United States and Canada, plunging many states into unfamiliar freezing temperatures. 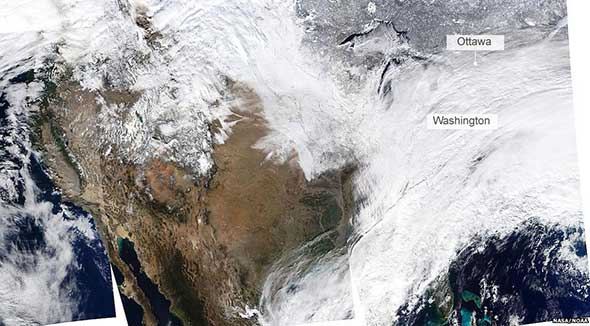 Will global warming alarmists ever set aside their hypotheses, hyperbole, models and ideologies long enough to acknowledge what is actually happening in the real world outside their windows? Will they at least do so before setting off on another risky, misguided adventure? Before persuading like-minded or naïve people to join them? Before forcing others to risk life and limb to transport – and rescue – them? If history is any guide, the answer is: Not likely.

The absurd misadventures of University of New South Wales climate professor Chris Turney is but the latest example. He and 51 co-believers set out to prove manmade global warming is destroying the East Antarctic ice sheet. Perhaps they’d been reading Dr. Turney’s website, which claims “an increasing body of evidence” shows “melting and collapse” across the area. They and the captain and 22 crewmen of the (diesel-powered) Russian charter ship Akademik Shokalskiy should have gotten a second opinion.

Instead of finding open water, they wound up trapped in record volumes of unforgiving ice, from Christmas Eve until January 2 – ensnared by Mother Nature’s sense of humor and their own hubris. The 52 climate tourists were finally rescued by a helicopter sent from Chinese icebreaker Xue Long, which itself became locked in the ice. The misadventurers were transferred to Australian icebreaker Aurora Australis, but the Shokalskiy remains entombed, awaiting the arrival of US Coast Guard icebreaker Polar Star. (Meanwhile, Tourney hopes to get more grants to study manmade global warming, to help him make more money from his Carbonscape company, which makes “green” products from CO2 recovered from the atmosphere.)

As to his expertise, Dr. Tourney couldn’t even gauge the ice conditions the 74 crewmen and passengers were about to sail into. And yet we are supposed to believe his alarmist forecasts about Earth’s climate.