Description: Fourteen long stone rows at the Rovina hill near Kounov is one of the most mysterious places in the Czech Republic. We know for sure that they are a work of ancient man, but their origin and purpose remain unknown.

They were discovered by Antonin Patejdl, teacher at Kounov, in 1934. Since then, various theories have emerged: the rows might have served as an ancient observatory, a market place, a race track, a sacred field, or a calendar. The rows are practically parallel, about 400 meters long, with spacing of 13-30 meters. They occupy the area of 11 hectares. The two biggest stones, weighing as much as several tons, are called Pegas (after scratches which resemble the Paegas constellation) and Gibbon (after the English historian Edward Gibbon). The rows are not complete due to their partial destruction in the past, and smaller stones are often covered by dirt, but we can still imagine the size of the original area from various visible fragments. 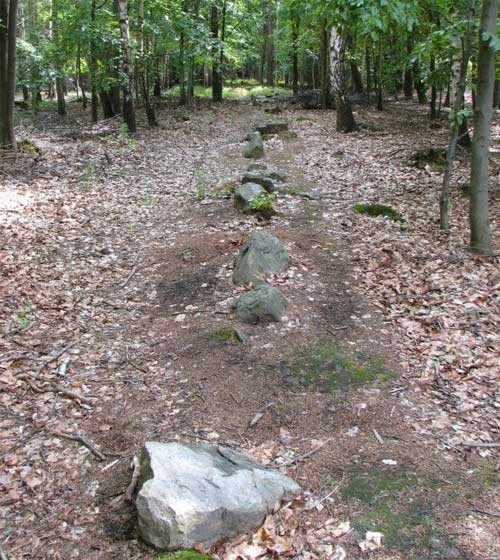 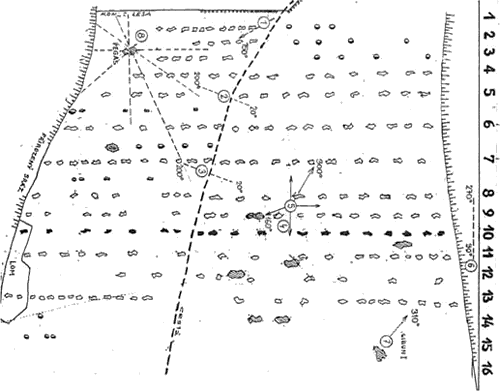 The yet unknown four properties of static charge, which were verified and proved by many experiments during an empirical research, explain not only the grouping of rocks in the rows of Kounov but also in many other cases. Men made hills were built across the whole world during the megalithic ages. There are about 100.000 of them on the American continent only. The known fact that friction of two different materials produces static charge has not been applied to flows of water (underground quells, streams, rivers, sea currents) yet. Water molecules create static charge due to their friction with rocks. The charge of water current produces three conductive energetic parts (aura, zones, and inter-zones) in the same way as charges of other matter. These penetrate every matter and create a conductive 3-D raster across the whole globe (the first yet unknown property of static charge). If we place a piece of any matter into one of the three energetic parts of a water current (a rock or earth in our case) that has a lower value of charge a spontaneous transfer of energy occurs between both pieces of matter until their energetic potentials have been equalized (the second yet unknown property of static charge).

The individual stones in the row were separated by such a distance that their auras overlapped each other. This fulfilled the condition for the creation of the common charge (third yet unknown property of static charge), which gained energy from the three dimensional conductive raster until its value was greater than the energetic value of the mound. After that the lower charge of the mound started to gain energy from charges of the row of rocks. The number of rows of rocks was given by the requirement of the constructors for the energetic value of the mound. By adding every additional row its energy increased. During the equalization of the energetic potentials a transfer of chemical properties occurs in between the charges at the same time (fourth yet unknown property of static charge). By combining rocks of different chemical compositions it is possible to correct the chemical properties of their common charge.

Looking at the bottoming on the individual stones in the rows by small stones it can be concluded that the place of the mound was “energetically hungry”. The small stones reduced the area of the surface that was in contact with the subsoil, which reduced the transfer of energy from the charge of the row of stones into the ground. The great area of the rows allowed for gaining energy from a great area of the energetic raster. This is a unique and admirable way of solving the increase of energy of the existing charge.

From our civilization point of view the technical development of ancient cultures is incomprehensible, but only until we realize that we missed something fundamental about static charge in the last century. Menhirs, dolmens, Logan stones, cromlechs and other similar small structures were used for curative purposes. The purpose of great megalithic structures with an energetic regulation like for example Teotihuacan, San Lorenzo, the pyramid of Akapan and many others that were built in a laborious way remains a mystery.