Dunhuang is a city (pop. 187,578 (2000) in Jiuquan, Gansu province, China. It was a major stop on the ancient Silk Road. It was also known at times as Shachou, or ‘City of Sands’. It is situated in a rich oasis containing Crescent Lake and Mingsha Shan, “Echoing-Sand Mountain”. Mingsha Shan is so named for the sound of the wind whipping off the dunes, the singing sand phenomenon. It commands a very strategic position at the crossroads of the ancient Southern Silk Route and the main road leading from India via Lhasa to Mongolia and Southern Siberia, as well as controlling the entrance to the narrow Gansu Corridor which led straight to the heart of the north Chinese plains and the ancient capitals of Chang’an (today known as Xi’an) and Luoyang. 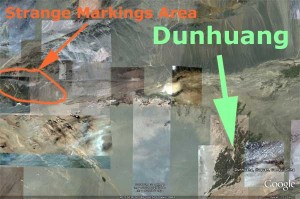 Mysterious Nazca-like site is located 100 km W from Dunhuang, Jiuquan, Gansu, China.  Google Earth satellite photos show few areas with strange geometric patterns (geoglyphs).  There are also 2 areas which look like “landing strips”.  Perhaps it is a military installation, however most of the strange areas are difficult to interpret. Noticeable erosion indicates that some of the patterns could be ancient…

Here are few Google Earth images  of the most interesting areas (click on each image to enlarge).

There are some mysterious marks which some call airports near the ancient city of Dunhuang in Gansu Province, I believe. I will provide solid evidence that these are nothing like an airport that I have ever heard of and I am a retired engineering manager and a pilot.

If one goes to Google earth an enters the latitude and longitude provided on the bottom of the first image, you can move the cursor around and see that the marks are not built up in elevation as an airport would be. Road graders and compactors are needed to pack a field sufficiently to safely take the extreme pressure that landing gears make at times. Any yielding of the dirt would cause the plane to spin out of control. Of course, there are no support buildings or taxiways to parking areas.

One may also see that common truck traffic has made tracks out across a number of the marks and therefore it cannot be paved or a prepared surface. If the marks were graded and compacted, they would be nearly perfectly level lengthwise and side to side. When tracing the contour with GE they still show the general contour of the area around them.

Water erosion on the west mark indicates that this desert area was once quite a bit moister and the marks were already there during heavy rains or snow runoff. Even the darker colored areas which one might be tempted to think are paved show signs of erosion.

This mysterious “grid” was discovered in China (see Google Earth coordinates on the pictures).
It is 31km x 31 km. When was it made and for what purpose? 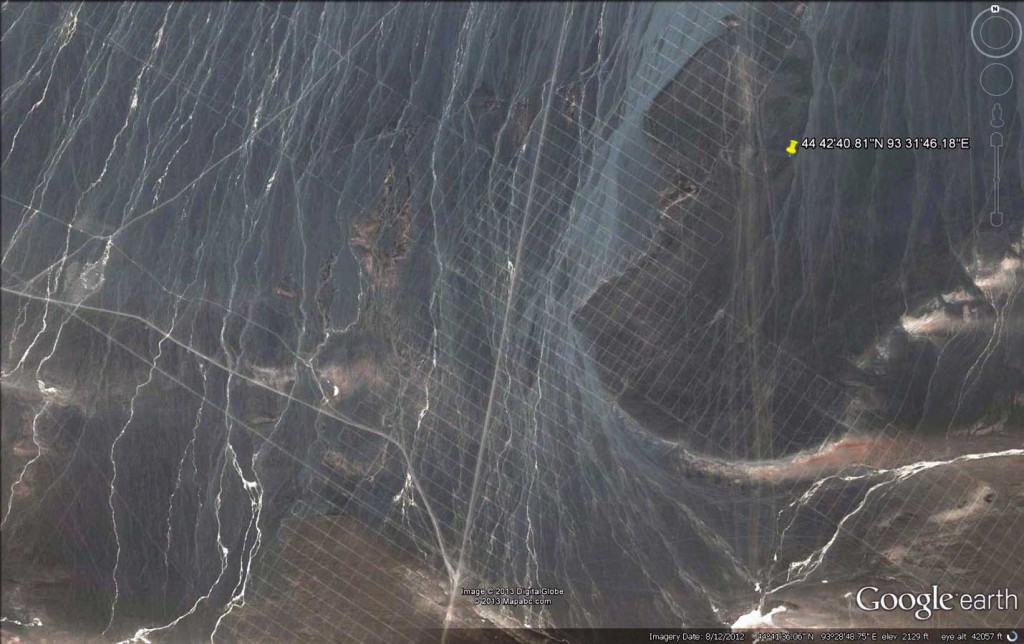 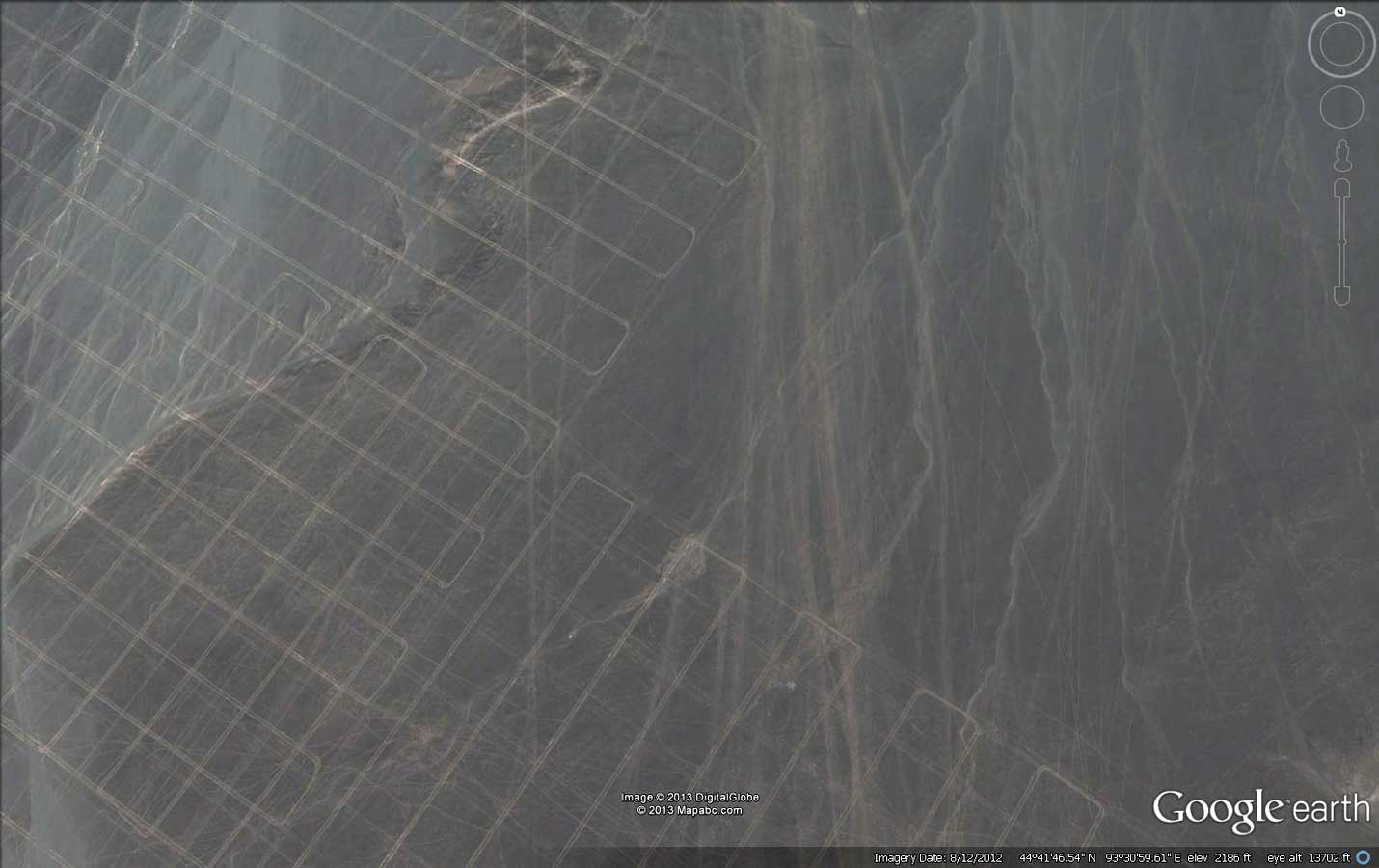 Detail of the satellite photo above.

Not far (NW) from the above location we find another grid (erosion suggests it was made very long ago – perhaps in ancient times?) 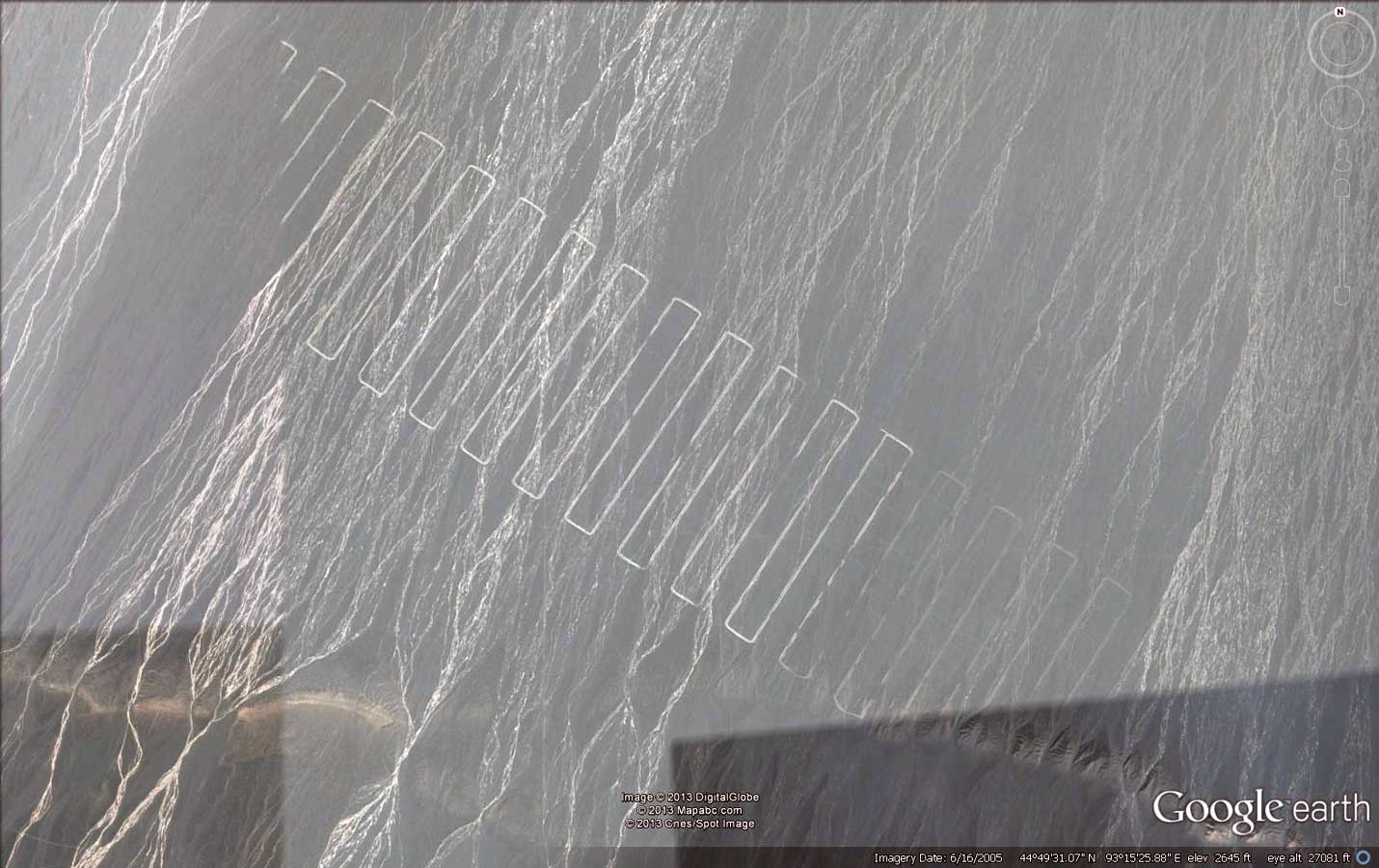 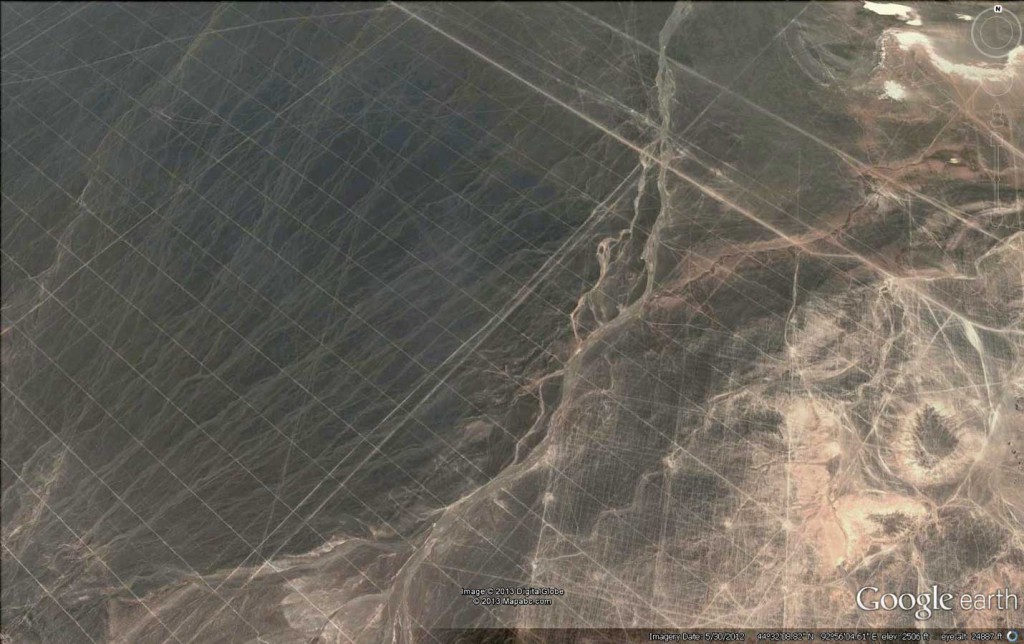