Could moons of a blown apart planet be among the Asteroids?

Ceres and Pallas have been called “dwarf planets” because of their spherical shape among a vast belt of very IRREGULAR shaped shards or pieces between Mars and Jupiter. This was once a planet, a planet that orbited the Sun in a perfect ‘Bode’s Law’ position: the precise place for a planet to orbit…

IN THE GAP. The largest “asteroid” (or “dwarf”) Ceres was discovered after painstaking efforts were made searching for the ‘missing planet’ in the gap. ASTEROIDS were discovered! Then many others were found nearly in order of size. (Asteroids are not everywhere in space but ONLY as a result of a pulverized body). The Asteroid Belt is generally 2.8 Astronomical Units from the Sun and so is the GAP or next Bode-position after Mars. Our true planets follow this distance-formula out from the Sun with a single exception (Neptune).

[See my article “New Order to the Solar System” on the aftermath of this great prehistoric Explosion].

Astronomers and astrophysicists have been familiar with the concept that the 5th Planet EXPLODED to form the Asteroid Belt for a very long time. But. Who has conceived that there are satellites of that shattered planet among the shards?

Use your eyes and see how irregular the pieces are. But a few are perfectly SPHERICAL… 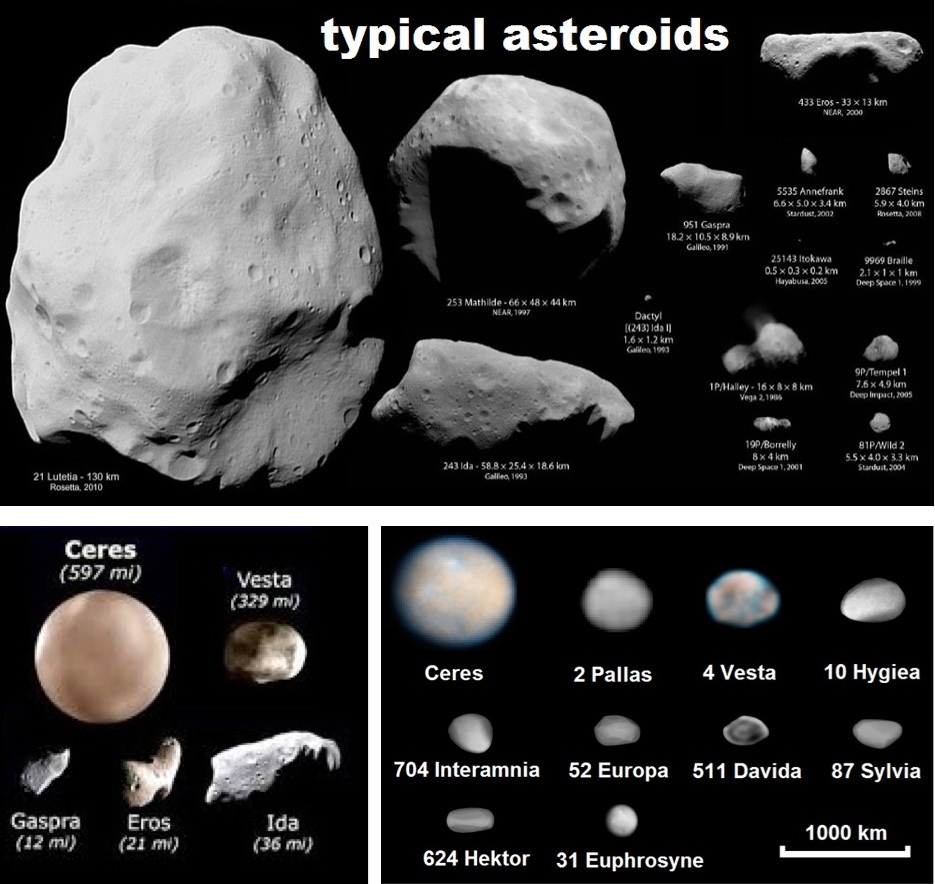 I have called the 5th Planet “Lilith” for reference and in stories.

Consider the general idea that Martians destroyed (electrically shattered) the 5th Planet and turned Mars red with radiation. Is that where ‘God of War’ comes from? Do you know what stands in ruin at Cydonia? That IS a mile-long Face and an aligned Great Pyramid of Mars and much more that parallels Giza, only on a far greater level. It’s a HUMAN Face. Did 4th Planet Humans war with Lilith inhabitants and did the Lilitheans lose?

Look at their shapes. The perfectly spherical ones are Ceres and the other is Pallas, a major body in the Belt and second one discovered.

Could it be that irregular “asteroids” are the pieces of Planet Lilith in the fifth position or Gap position? Could “dwarf planet” Ceres not be a part of the shattered planet, but the largest of its moons? Look at its shape. It’s intact and held its original shape after the Big Blast.

Examine the shape of Pallas, which is known as a “minor planet.” It’s round or spherical exactly like Ceres. Logic might dictate: These aren’t dwarf or minor planets; these were once satellites of the larger planet before it exploded. 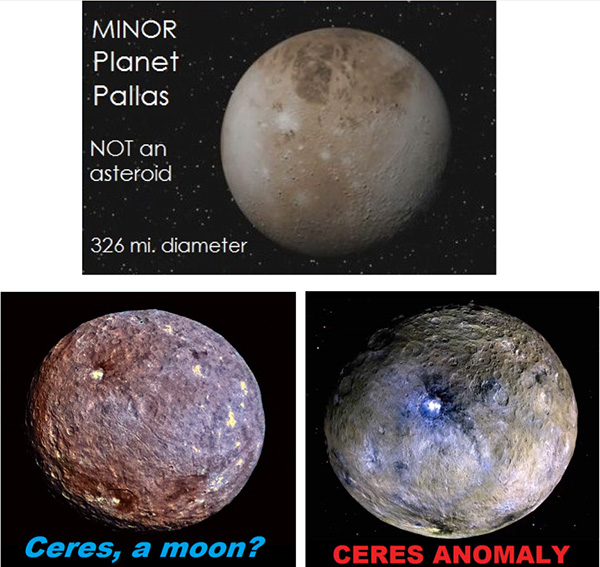 There could be smaller moons of ‘Lilith’ less than 100 miles in diameter that are mixed with the thousands of shattered and very irregular pieces. These (possible) moons would have kept their ROUNDED appearance like Pallas and Ceres.

Asteroids, over a million years, tend to round themselves in shape very slightly. Meteors aren’t everywhere flying through space, but there are micro-meteorites. Micro-meteorites tend to ROUND things. Old craters are rounded or worn slightly in appearance while new craters are sharp and well-defined. Consider that meteoric shards that are the Asteroid Belt and orbit as a group, soften a bit over a lot of time. If they were rocks in a stream we would understand the polishing into smoother rocks. Streams of space, of course, are not as thick yet do provide ‘micro-erosion.’ This explains how ‘pieces of Lilith’ are not extremely jagged in shape as you would expect as newly broken pieces. TIME has worn them down, but time did not turn a few of them into balls.

I enjoy viewing everything a different way; consider previous research and add to it by…

Maybe we’ll find new answers, new pieces to the puzzle? And they’ll be a better fit~

What is the shiny anomaly on Ceres?
See this amazing YT that investigates the unknown: https://www.youtube.com/watch?v=zuDlbqFJemk

Did you know in late 2016 a NASA mission will go to one of the asteroids? The asteroid is called Bennu. I can say for certain that the NASA reason for the mission is BS. When have they ever been truthful to us? Don’t believe the lies. The feds tell us that the mission to small Bennu will teach us the “story of the Solar System, which is ultimately the story of our origin.”

BULLSHIT and know that the reason is bullshit. Here’s why they are going…

You think this is the first time an ‘innocent,’ public, ‘dog & pony’ show has been thrown at us while the real motives were secreted away? Did they already know there was something peculiar like CITIES ON PLUTO before they sent the probe there? You think they’ve looked closely at the poles of Saturn and not told us? Europan oceans? How about that Monolith on the Martian moon, Phobos? You think they got some close-ups of that? You think they’re telling us the truth about Venus? We receive the smallest of edited scraps.

I urge you to investigate on your own. Use YouTube. Sift through the bullshit (AGAIN); find the good stuff that jives with your research. You better do research…or you have no right to render an opinion. Don’t render opinions. Only give conclusions after you’ve done the work, it’s called STUDY. You will discover that Life is everywhere. They’ve been lying and hiding the truth from us for a very long time…