Tera City was about to lose its centerpiece.  Tor, Sa, Jud, Ran, Ro and Fon were assembled in an informal ceremony to say goodbye to their green comrade with the spiked hair.  Par was going back.  It felt right.  It was the correct thing.

Each young man and woman got up to the podium and BLASTED Par with good-natured insults.  He was reminded of numerous times green guy was a bastard and a prick.  They also told him what a spoiled brat he is.  They each mentioned what they despised about their test-tube brother.  And, each did not fail to say what they loved about the fucker.  The moment between Par and Ran was especially touching.

Fon appeared to have grown a bit taller and wore slightly longer hair.  He picked a color.  Fon had purple hair.

Par was the Man of the Hour.  He walked to the podium and faced his friends.  He only said two words:

‘Thanks, bitches’ (wink).  Par stared individually into everyone’s eyes in a long silence.  Best friends did not have to say a word or think a thought.  Tears in everyone’s eyes said everything that was necessary.

Green guy waved similar to Klaatu at the end of ‘The Day the Earth Stood Still.’  His comrades waved in return.  Par blew them a kiss.  He was gone and the steps retracted.  A BOOM signaled the powering up of EM engines.

Suddenly, Tor received a personal communication while his friend was in the craft.  Par told him, timing is everything.  I’ll let you know how tomorrow turns out.

RN12-VP7 whirled with an electric whine and spun high above Tera City.  In a New Earth minute, Par and Tincan reached the launch-point.  The craft beamed into the rift perfectly and entered the distant future.

Each of the couples gravitated toward the other.

Tor held Sa’s silky shoulders and leered into her blue eyes.  ‘If only he COULD tell us of the Earth he encounters.  I certainly want to know…but he CAN’T.’  Tor’s head dropped somewhat.

Sa sensed an incoming transmission.  The last, big mystery or unanswered question will be resolved.  Everyone felt it.

Tor’s head lifted.  It was as if his buddy bridged the enormous time-gap between them.

Then, it happened.  They all heard Par’s thoughts:

A clear mind-picture was also sent to the six Terans.  They understood that it would be the last gasp of energy from a dear friend.  The image was the final piece to an ultimate puzzle and a fitting epilog.

The shared picture viewed by the progenitors of not only the human race, but the Zeta Empire…was a brilliant Metropolis Earth of 1963.  Flying disks of all colors adorned an exquisite sky.  Huge towers stretched high above clouds.  People were free from the ravages of the PTB.  There was no PTB!  There were no wars.  And, everyone had color in their hair!  Modern clothes of Moon-punks were nothing compared to future fashions of the new 1963.  Sophisticated citizens utilized super-technology properly.  Everything was done in the right, productive, positive way.  What wonders could be achieved in a world not dominated by fear and fascists?

A full Moon was seen in a day sky of the mind-image.

Tor thought he sensed a micro-problem in the transmission.

If we changed human history, Atlantis continent never sank; the Empire never fell and the Moon would not be needed as a monitoring station.  Earth should be moonless.

He looked to his lover to find what she thought.  Sa was uncertain.

Ro corrected the leader with, Tor, take a closer look.  The telepath did not see what was directly in front of her, only the shared picture from Par.  She seemed lost in a particular detail of the 1963 sky.

Now, Tor saw it and spoke.  The truth was confirmed.  ‘It’s the far side from Earth.’

The group-mind understood that they had succeeded.

Ro smiled broadly and said, ‘I guess we took the Mechanism offline, after all.’

Tor replied with, ‘ha, some things you can change; other things…you can’t.’ 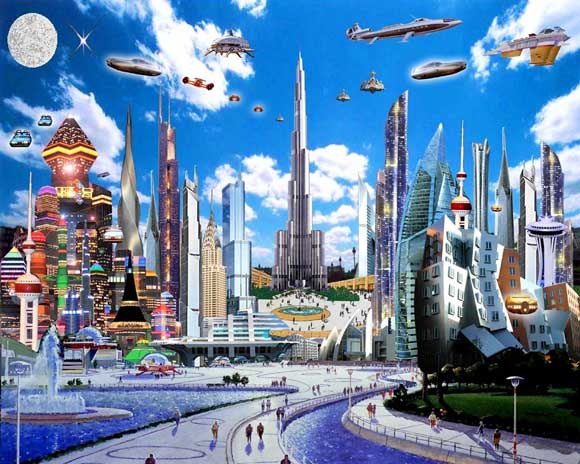 ‘Moonchildren’ was first conceived during the 1990s as I personally learned of a New World Order and real fascists that secretly rule the planet…and I wondered:  What if we haven’t been back to the Moon for a reason?  Reason being; we’re already up there!  So, I conceived of special children (of high-tech fascists) being test-tube born and living in a secret, lunar society.  What if they went radical PUNK and rebelled in 1963?  What if they discovered the plot to kill JFK and attempted to hijack a saucer; come to Earth and stop the killing?

The accelerated children have learned the ‘right way’ under alien training and have mental powers.  The ultimate conclusion involves the relationship between humans and grey Zeta Reticulan aliens.  We discover they are us in the future and we are them in the past.

The short story could be adapted into a film or TV series.  It was loosely based on a show called ‘The Tribe’ – a New Zealand/British production involving post-apocalypse (punk) children with color in their hair.  ‘Moonchildren’ can communicate telepathically, which could be easily done in ‘voice-overs’ during production.  The problem is the controversy.  What’s really happening on the Moon and with the Roswell grey Zetas?  Does the story concept hit too close to reality to ever have a chance of being made?

PS The President Who Told The TRUTH

This video contains one of the most awesome, inspiring and truthful speeches ever given by a president. This very speech must have caused a lot of panic among the higher echelons of the elite. Kennedy had been in office for only 3 months and he was already taking unprecedented steps to empower ordinary people. Kennedy did more for civil rights than any other president since Abraham Lincoln. Kennedy was a big supporter of the constitution, he was against the tyranny of big government. He wanted to withdraw US troops from Vietnam. He wanted to abolish the CIA and Federal Reserve, and he warned us of criminal elements within the establishment who wanted to cease an opportunity to restrict peoples freedoms. He urged the press to be more open and to fulfill its obligation to inform the American people about pertinent facts. And on top of that he spoke openly and candidly about the dangers of secret societies and their influence over the way government works. So is it any wonder that he was dramatically silenced only two years after making this epic speech?