PRE-STORY:  After Roswell, a secret ‘Trilateral’ group of elite/alien powers created a base on the Moon unknown to the people of Earth.  The base (code name ‘Mayflower’) was established in 1951.  Twelve years later…Mayflower consists of more than ten thousand Americans, Russians and Asians (for the most part) with ‘special technical skills’ working together…while Korean conflicts and Cold Wars brew on Earth.  On rare occasions, grey Zeta Reticulans make an appearance in the moon-base.  After all, the aliens with advanced technology set up the experimental base inside the Arzachel Crater on the near side of the Moon.  Zetas were in charge and ran the show.   A group of genetically-engineered, human children have been particularly trained.  They demonstrate telepathy, clairvoyance and telekinesis far above the usual pampered children of the elite.  ‘Born’ on the Moon and referred to as ‘Maychildren,’ they appear as teenagers although are only seven or eight years old.  There is wild unrest among the young, lunar rebels who question why few have so much while billions of Earthlings have such terrible wars and hardships? 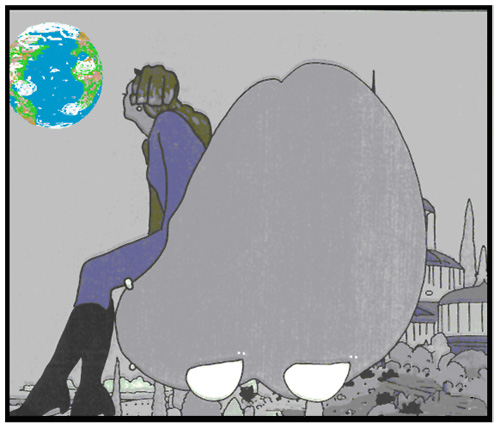 Tor placed a magnetic device Jud developed on the sealed portal which led to the Keystone’s Control Room.  What the boys and girls with accelerated abilities and color in their hair were attempting was one, big, naughty PRANK.  Maychildren anarchists have not thought this out and were operating in the dark.  From brilliant Tor (almost 9 years old) to little Fon (6 and a half years old), the special Moonchildren were the most gifted humans on either world.  Yet, most of them were completely unaware that they were being monitored.  Their little prank was choreographed every step of the way.

I don’t believe it…that we’ve made it this far.

Believe it.  Tor answered his mate in their secret-psychic language reserved for Maychildren.  The small device began to hum as twinkling lights preceded the first number falling into place.  When seven numbers have appeared in the device’s window, they will have the code to open the sealed portal.  It’s going to take some time…hmmm.

How long…will it take? Par asked his fearless leader.

Tor was concentrating on Third Level and did not respond quickly.  He seemed like he was juggling invisible balls and did not want to loose focus.  I don’t know, doesn’t matter.  Minutes.

Par with green, spiked hair could not contain his excitement.  If we’re caught…

Tor had long, blue, straight hair that moved with each gesture.  He broke from Third Level, turned to Par and grabbed him by the shoulders.  We’ll be flogged by the PTB for sure, but don’t worry.  This will work!

Both young rebels smiled and returned to the job at hand.  The second number appeared after blinking lights.  Five more…it’s hard to maintain Third Level.

Why couldn’t Sa or Ro have the guards take the Mechanism offline?

Tor tried to answer.  Too…

Why do we have…

After a bit of effort and telekinetic sweat by the blue-haired boy, the third number popped into place.  Par thought of another question.  But before it was transmitted, Tor intercepted the inquiry with an unspoken statement of his own.

Look.  Keeping up Third Level is tough.  Par, you’re only making this longer for us; not cool.

I have to get in there and change the old settings.  By the way, why is it again that you’re here?

Comrade!  This is going to be the greatest happening of all time!  Can’t let YOU take all the credit.  Par expressed his true feelings and was soon corrected by Tor.

Par…this isn’t a…prank.  It’s not a GAME, either.  You’re here because you think this is fun?!

Yeah, mate.  Why else?  One more number fell into place on the device.

Because it’s important!  It’s sick that good people of Earth have no clue what’s going on here.  Not right that we get all the privilege and they get SCRAPS…when they pay for it!  Maybe…maybe our lives will have meaning if we pull this off.  Tor was a born leader and hero.  He made his thoughts crystal clear.  He was charged and instantly returned to Level 3.  He found he could now communicate with Par and deal with the numbers as planned.  Another number locked into place.  Two more…

But, how does breaking the Moon’s Gravity-Lock and showing Earth Luna’s far side…what good will that do? Par asked in confusion as to the Moonchildren’s raid and ultimate objective.

Tor answered without an audible word, we expose the Big Lie!  Have you thought about what will happen if we succeed?

No, outside of us getting killed.

It will be the first time since the last days of Atlantis when Luna was brought here.  If the ancient Keystone’s settings can be altered like the girls have told us they CAN…it means far side transmitters will slowly move to pointblank positions at Earth!

And once they receive Zeta channels, Mega channels and everything ancient and alien is thrown at them…what then?  The Maychild with green, stiff, spiked hair had many points.

Six numbers on Jud’s magnetic device have locked into place.  It was almost ‘showtime’ for these brilliant Moon-punks so incredibly ahead of the people in 1963.

Tor continued his telepathy with Par and remained at Third Level.  What we’re doing is so DAMN important.  Earthlings gotta know!  WE have to tell them!  They don’t have a clue, brother.  They’ll be no more Man in the Moon to them.  Everything will be different; we’ll have literally changed the world!!

Well…I was getting bored.  Par winked.

Get ready, Tor transmitted.  Timing is everything.

Tor, you sure the guards AREN’T in the room?  What if the portal opens and they’re still there?

The blue boy bit his lip while the eyes of the green boy got larger with anticipation.  The last number fell into place as the heavy, round door flung open with only an extended hissing sound.

A few minutes earlier, Ran entered Sa’s oddly dark compartment in Sector 17.  Sa and Ro meditated on the floor according to their part in the ‘important’ act of sabotage.  Jud, with his turquoise crew cut, sat quietly in the corner.  Fon was gone.  Usual bright lights of the compartment were completely off.  PTB remote-viewers could hardly see Ran’s long, red hair or Ro’s short/white hair.  A single candle barely lit Sa’s expressionless face and fabulous, long, white Mohawk hair.

Ran and Ro were female clones with identical faces, but they could not have been more different in personality.  The twins often shared the thought that their differences were not a matter of fate or mere coincidences.  No, they were convinced that wild Ran and shy Ro were genetically engineered to be that way.  Among other thoughts were, maybe ALL humans originally were genetic experiments conducted by the Zetas?

Ran sat on the floor with a loud ‘thud’ and was also illuminated by one candle.  She thought the only question that was on the guarded minds of the Moonchildren, what’s happening at Jones Beach?

Innocent Ro, who knew far more than her birthing-twin, was quick to respond.  Sssssh!  This is critical.  The boys will soon enter the Control Room.

From the corner Jud silently asked Sa, and what is it that you’re doing?

The female leader (Tor’s lover) with the long, white Mohawk answered after a deep breath.  Implanting the suggestion to the guards that they have to PEE.

Ran held back a laugh.

After an awkward stillness, Jud had to break it with…well, are they IN?  Did the device work?

Sa opened her eyes and spoke, ‘yes.’  Speaking was the Maychildren’s way of emphasizing their communications fully aware of how inferior speech was.

Back at the ancient ‘Jones Beach’ facility (newly named after New York bankers), Tor entered and was followed by his good friend.  No one was there; the guards were gone.  Inside was the incredible Mechanism more than twelve thousand years old. Venusians brought the primordial Moon into our Solar System, recently, after the last collapse of Atlantis.  It was then that the lunar orb, rich in minerals, was set to face only one side toward the prime planet.  The ‘Teran Experiment’ which had gone terribly wrong could be better monitored by various overseers.  The Keystone kept the illusion of ‘Gravity-Lock’ balance over the millenniums.  The Mechanism compensated and moved the satellite back in place as natural forces continuously pushed to throw it off.  People of Earth will never know how close they came to viewing the far side of the Moon in 1963.  Or, was it that the young rebels never had a chance to succeed?

There it is.  None of us ever get to see this, man.  Wow, whatcha think?

Bloody hell, Par thought in awe of what stood before his eyes.  They could hear electro-magnetic engines at work that literally held back the spin of the satellite.

Quickly now, Tor expressed.  We have less than three minutes.  The fast blue boy rushed to an intermix port.  He punched in code numbers that should be the ‘key.’  The numbers were more covert information from Jud’s shadowy sources.  Why did a paranoid thought manifest inside the mind of the fearless leader?  Will this turn out to be a blessing or a curse?  Didn’t matter.

What?  Par caught wind of Tor’s uncertainty or worry as the green youth used his telekinesis.  With unseen hands, Par positioned elongated lights closer to where Tor stood.  He also kept an eye out for the return of the guards.

What?  Par asked his Moon mate.  The question went unanswered.

The last number sequence was punched in and the dusty EXECUTE control was pressed, which should initiate an unstoppable chain of lunar events.  Basically, a PAUSE button was hit and low/industrial sounds lessened to a low whisper.  The Keystone will no longer compensate for natural, lunar forces.  Silently, the Moon had put on its breaks; slowly, ever so slowly, Luna will eventually come to a grinding halt.  Lunar gravity will temporarily shrink to nil.  A minimum of 20 Earth hours would be necessary to restart the ancient Mechanism back to its original level of operation.  Or, so the special children thought.

There!  It’s done!  You know what this means?  What will happen on Earth…besides the turning off of lunar gravity?  Ah.

No…ha.  ‘Whew,’ Par also exhaled a hardly heard sigh of relief.  Each smiled as if they had won a Roval or Romvoid championship finals.

The boys and girls were extremely proud of themselves.  They celebrated in Sa’s compartment and in the Control Room.  They were delirious.  The boys at Jones Beach did not know what to do next.

Tor had the strange thought of fleeing from the Moon, their only home.  Will they really travel to Earth, a place they only dreamed of?  Maybe the children would have to; as refugees for their traitorous actions?  Would they be hung from the yardarms as revolutionaries?  Tor and Par only knew that they had to leave the Control Room, now.

The guards were about to return from the bathroom at Jones Beach.  They only left the Control Room for a window of three minutes.

Go!  Both children dove back out of the portal.  Tor pressed the reverse button on the device which thrust the portal closed with a hiss sound.  Wow.

When the Keystone cops returned to their stations, they knew exactly what had happened.  One of them struck an ‘undo’ button on the main keyboard.  The faked ‘idle’ sound was removed and the normal machine sounds were again heard and amplified throughout the Control Room.  A wide HD screen displayed the precise actions of the boys from a few minutes earlier.  The guards shook their heads and smirked.  The Moon was not going anywhere.

NOTE:  This story spans 6 pages. Click on Page 2 (below) to continue reading