Living organisms may use bioluminescence for a variety of reasons, such as communication and display

If you thought glowing plants were science fiction from Pandora (Avatar movie)… you’re wrong! Scientists in San Francisco have created plants that glow brightly enough to light your home!

Fluorescence: Energy from an external source of light is absorbed and re-emitted. Fluorescence can only occur in the presence of this light source; it cannot happen in complete darkness.

Bioluminescence: The energy for light production comes from a chemical reaction in living cells, as opposed to the absorption of photons as happens in fluorescence. 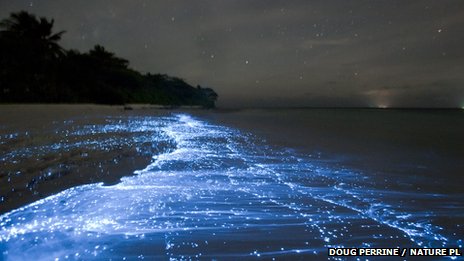 Bioluminescent plankton lights up a beach at night

Bioluminescence describes the light that some living creatures such as fireflies and jellyfish emit from their cells. Harnessing these reactions has already transformed key areas of clinical diagnosis and medical research.

But scientists are now looking at whether this “living light” could help enhance food crops, detect pollution or even illuminate our journeys home.

“When I started researching bioluminescence 40 years ago at the [Cardiff University] medical school, a lot of people raised their eyebrows and said: ‘What the devil is this guy doing working on animals in the sea? He was brought from Cambridge to do medical research’,” Prof Campbell explains.

But he was able to spot the phenomenon’s potential. Having discovered the proteins involved in bioluminescence, he realised that by combining luciferases with other molecules, it was possible to harness this light emission to measure biological processes. 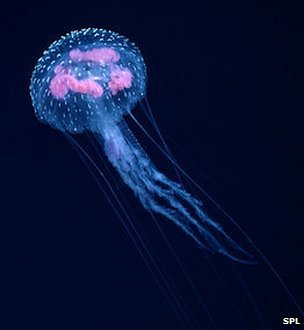 Bioluminescence could shed light on changes in the marine environment

This would pave the way for something of a revolution in medical research and clinical diagnosis.

For example, by attaching a luminescent protein to an antibody – a protective molecule produced by the body’s immune system – it could be used to diagnose disease. This allowed clinicians to dispense with the radioactive markers that had previously been used in such tests.

“This market is now worth about £20bn. If you go into a hospital and have a blood test which measures viral proteins, cancer proteins, hormones, vitamins, bacterial proteins, drugs, it will almost certainly use this technique,” Prof Campbell told BBC News.

Bioluminescent proteins are also tools in drug discovery and have found widespread applications in biomedical research, where they are used to study biological processes in live cells.

“If you’ve got a university department that doesn’t use these techniques, they are not at the cutting edge,” says Campbell.

Other applications are on the horizon. At the University of Lausanne in Switzerland, Prof Jan van der Meer has developed a test for the presence of arsenic in drinking water using genetically modified bacteria.

Arsenic contamination of groundwater is a pernicious problem in some parts of the world, especially in Bangladesh, India, Laos and Vietnam.

Prof van der Meer’s microbes have been engineered to emit light when they come into contact with arsenic-containing compounds. Potentially contaminated water is injected into vials, activating the dormant GM bacteria. The extent to which the microbes emit light is then measured to provide an indication of arsenic concentrations in the water. 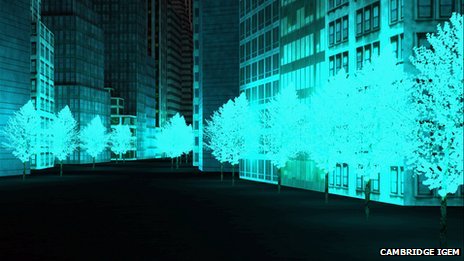 But regulatory hurdles remain to the take-up of bacteria-based tests in these countries. And, Prof van der Meer adds: “In the end it comes down to market things… things you cannot control as a scientist.”

So called rainbow proteins (a spin-off from work into bioluminescence), which change colour in response to particular compounds, are also an option for detecting environmental toxins, or the potential agents of terrorism.

There are already several consumer applications of bioluminescence: one US firm has made use of it to manufacture luminous drinks for sale in nightclubs.

And researchers have even modified plants so that they emit light. Bioluminescent crops could indicate when they require water and nutrients, or warn of disease and infestation. However, the controversy surrounding GM foods has so far prevented these ideas from taking hold.

A few years ago, a team of undergraduates at Cambridge University researched the idea of luminescent trees that would act as natural “street lamps”.

“What we achieved in that project was to put together some DNA which allowed bioluminescence, to show that it worked in [the bacterium] E. coli, and to submit it to the ‘parts registry’ which holds this DNA so anyone else can use it in future,” team member Theo Sanderson told BBC News.

“We were approached about a year ago and offered funding to continue developing the project, but we have all gone on to other things and so it wasn’t really an option.”

Previous efforts to create light-emitting plants in the lab have made use of a luciferase gene derived from fireflies. But these plants can only glow when supplemented with an expensive chemical called luciferin. The method used by the Cambridge team is attractive because it is based on bacterial systems which produce their own fuels for luminescence and so can be fed normal nutrients. 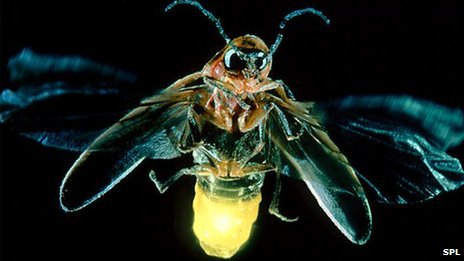 Glowing plants have used a bioluminescent protein derived from the firefly

In 2010, a separate team published a study in which they were able to demonstrate that such methods could be used to create plants that glowed without the need for chemical supplements. The US-Israeli team of scientists inserted light-emitting genes from bacteria into the plants’ chloroplasts – the structures in their cells which convert light energy from the Sun into chemical fuel.

Mr Sanderson, who now works at the Sanger Institute near Cambridge, said this was a good choice because chloroplasts are essentially bacteria that have become incorporated into plant cells, so they can easily express the microbe-derived gene without the need for other modifications.

But researchers will need to find ways to boost the light emission from such lab organisms if GM trees are ever to light our way through the urban jungle.

Prof Campbell says the potential of luminescent proteins in drug discovery and medical research has not yet been fully exhausted and he is currently collaborating on a project to use luciferases to research Alzheimer’s disease.

Bioluminescent creatures might also provide a convenient means of studying environmental changes in the sea. Some animals obtain the light-emitting chemicals they need from the organisms they eat. So studying the interactions between these species might allow scientists to detect changes in marine food webs.

Despite the impact on clinical diagnosis and research, Prof Campbell points out that he has only ever received one grant to research bioluminescence. Nevertheless, he says it is a “beautiful example of how curiosity – quite unexpectedly – has led to major discoveries in biology and medicine. And it has created several billion dollar markets”. 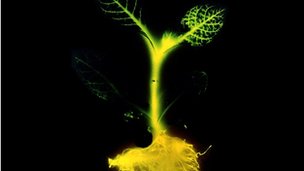 In the 1980s scientists made a tobacco plant glow

A glowing plant that could provide a sustainable light source has caught the imagination of backers on the crowdfunding website Kickstarter.

Backers are promised seeds for glowing plants, although delivery will not be until next May at the earliest.

The “biohacking” team behind the project said that in future trees could act as street lights.

The researchers are keen that their mix of DIY synthetic biology and sustainable lighting remains open-source.

“All of the output from this project will be released open-source, the DNA constructs, the plants etc,” it said on its website.

The research team, led by synthetic biologist Omri Amirav-Drory and plant scientist Kyle Taylor, aims to transplant a fluorescent gene into a small plant called Arabidopsis, a member of the mustard family.

The team has chosen this plant as it is easy to experiment with and carries minimal risk for spreading into the wild.

However, it hopes that the same process will work for a rose, which it considers to be more commercially appealing.

The team will work with luciferase, an enzyme common in fireflies as well as some glowing fungi and bacteria.

They will then “print the DNA” and the final stage will be to transfer this to the plants.

Initially the genes are transferred to agrobacteria, increasingly used in genetic engineering because they can transfer DNA between themselves and plants.

Biology is very energy-efficient and energy packets are more dense than batteries. Even a weakly glowing flower would be a great icon

This method will only be used for prototypes as the bacteria are plant pests and any use of such organisms is heavily regulated.

For the seeds that will be sent to the public, the team will use a gene gun that effectively coats nanoparticles with DNA and fires them into plants. This method is not subject to regulation.

George Church, a professor of genetics at Harvard Medical School who is backing the project, said that biology could provide great inspiration for more sustainable light sources.

“Biology is very energy-efficient and energy packets are more dense than batteries. Even a weakly glowing flower would be a great icon.”

The team is not the first to create glowing plants.

In 2008 scientists at the University of California created a glowing tobacco plant, using luciferase.

And in 2010 researchers from the University of Cambridge were able to make bacteria glow sufficiently to read by.

Theo Sanderson, a member of that Cambridge team, has blogged about the new attempt.

“Nobody can deny that the idea of walking down a path lit by glowing trees is pretty enticing… what has disappointed me has been the lack of discussion as to what the team actually plan to do with the funds raised, and whether the science stacks up,” he said.

“My prediction is that this project will ship plants which have a dimly visible luminescence in a pitch-black room.”

If you thought glowing plants were science fiction from Pandora… you’re wrong! Scientists in San Francisco have created plants that glow brightly enough to light your home! Anthony chats with the creators to learn more about their enlightening work.

DNews is dedicated to satisfying your curiosity and to bringing you mind-bending stories & perspectives you won’t find anywhere else! New videos twice daily.