One of Nature’s most spectacular sights is that of a starlings’ murmuration, the event when anything from thousands to millions of starlings gather and flock in one area and put on a wonderful aerial display that is both absolutely captivating and mesmerizing. Watching these rapidly assembled moving forms and shapes, it is sometimes possible to identify a giant outline or image of some mammal or creature, other times we are simply treat to some strange visual that we can only guess at from this milling crowd, none of which, despite their close proximity, in following the six nearest to it and with lightning fast reaction that are under 100 milliseconds, ever collide with one another. 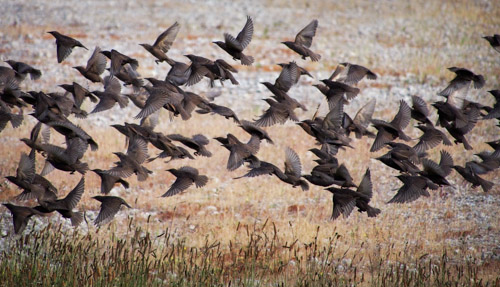 Yes, it is the easy way out to declare that the shapes we see are suggested to us by the brain’s predilection to seek out identifiable patterns for us – and yes, it is a major function of our neurology to do that, in order to make sense of things to us – but what if we are missing the greatest opportunity yet, presenting itself to us to fathom out a deep, natural mechanism here at play, far beyond simple entertaining random patterns for no real purpose? My own thought is that this is exactly what is happening to these original shape-shifters, and not just another example of making faces in the clouds. What if it is that simple and we ARE seeing a deliberate presentation of birds, sea creatures and many others rather than subjective perceptions that differ from person to person like a Rorsach blot interpretation? 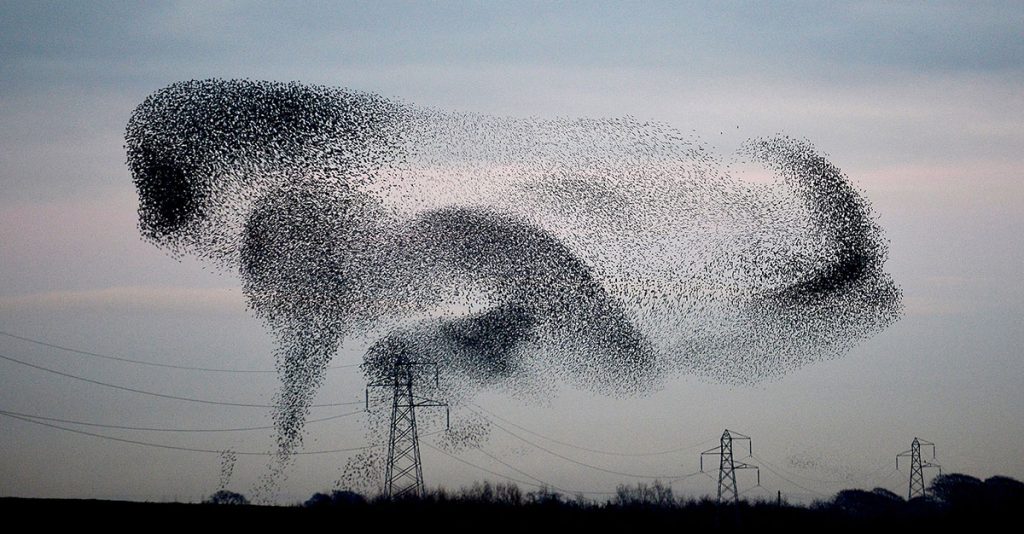 Pic 2: Clearly some sort of animal?

The conventional reason for why starlings act as they do is that they are attempting to become a giant signpost to attract other starlings to come together to roost. Sounds sensible, so why take the shapes of identifiable mammals and such, why not just be one huge, lumped mass crying out ‘Were here!’ Belonging to the family Sturnidae from the Latin word Sturnus, starlings are native to Europe. Asia, Africa, Northern Australia and the tropical islands of the Pacific, a wide range of habitat from the Arctic Circle to the Equator. 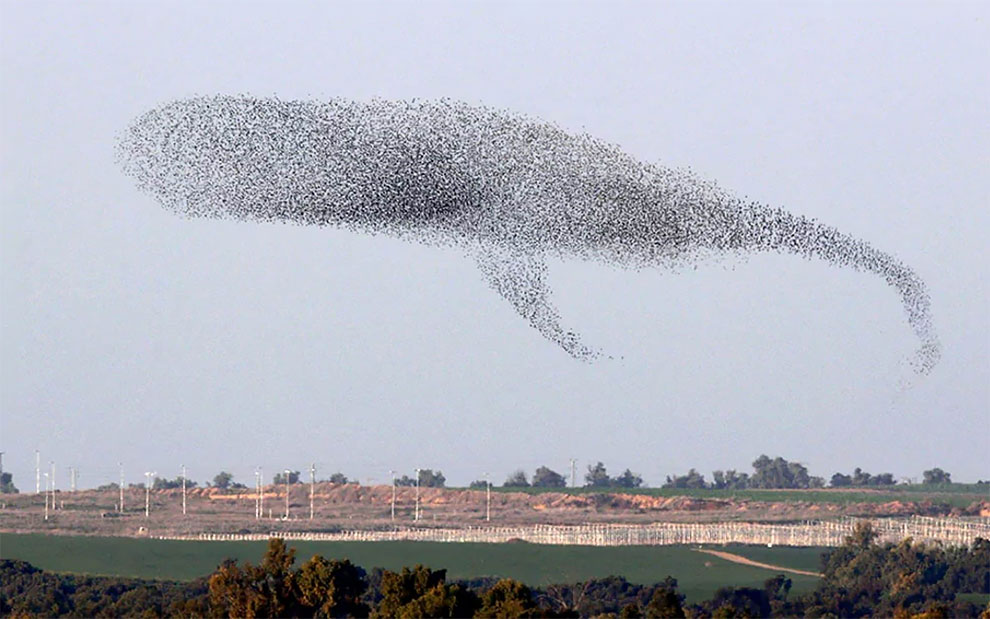 I wonder who was the first or responsible to name the starling thus, a combination of the word star and, if we elect in the Tibetan sense ‘ling’ meaning a place. It is interesting to note that the Myna bird from the Indian of the starling family can be taught to talk, and starlings in general with its diverse and complex vocalisation embeds surrounding sounds like car alarms and human speech patterns into their own calls, Not surprisingly then is that currently the starlings are the subject of research into the evolution of the human language. The similar looking word ‘Myneer’ from the Dutch takes us closer to the divine with its meaning of ‘Lord.’ 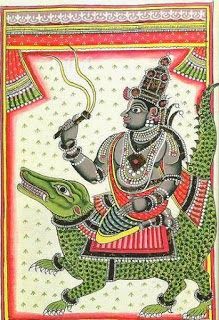 Pic 4 Varuna, god of the sky and the oceans

A deep meditation on the subject of starlings unexpectedly arrived us at a returning Indian flavour with the Hindi divinity Varuna. Varuna holds in his hand a noose and it from here our paper chase begins. The definition of a noose is thus, ‘a loop with running knot which ties the firmer the closer it is drawn’. Here we see we are dealing with the word knot from the Latin ‘Nodus.’ Now, if we turn to the meanings associated with knot we will clearly see an association with that of a starling murmuration; ‘A bond of union, a tangle, intricacy, a clump of cluster, to unite closely’. Parallel ‘Nodus’ with a physical network Node, (an active electronic device attached to a network) in telecommunications networks capable of creating, receiving or transmitting information over a communications channel. Do starlings transmitting their images as a form of communication awaiting recognition of an intelligence behind it? 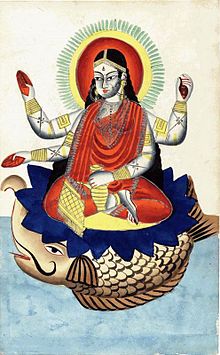 Pic 5; Makara of the sea, vehicle of Varuna

In the Hindu Puranas, texts that are part of the Vedas that discuss creation, we find Varuna as god of the sky and then of the ocean, his vehicle being that of Makara, a sea creature hybrid by way of part stag, deer, crocodile, or elephant at the front, with a fish or seal tail at the back. One of the oldest gods in Hindu history, Varuna ‘Knows the path of the birds flying through the air’ and In January this year German photographer captured an award winning photograph of a perfectly shaped bird from a murmuration over the Costa Brava, Spain. 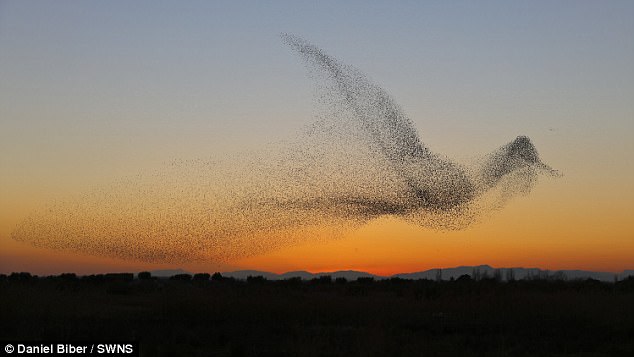 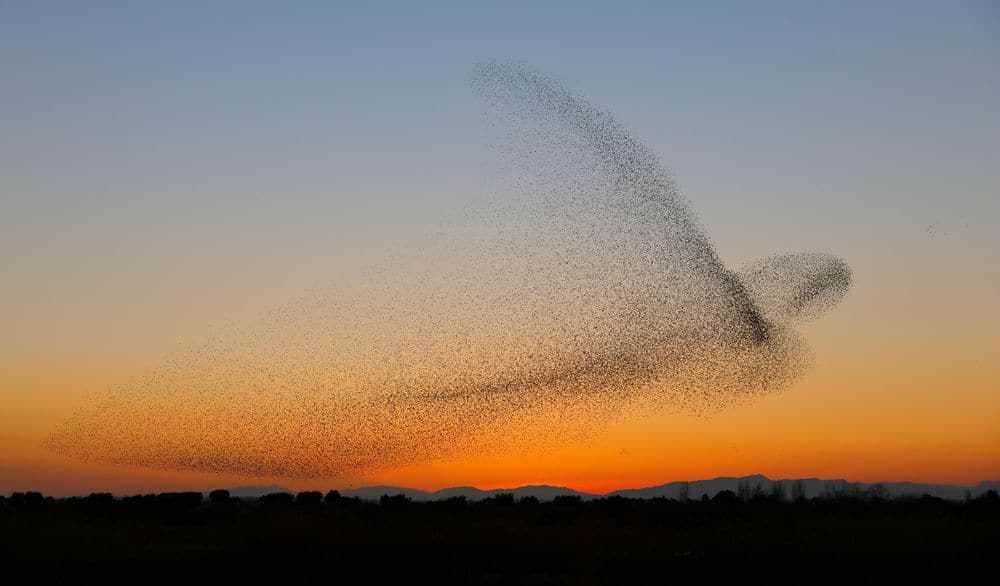 Another of the sky and water Varuna’s duties is to make the stars come out at night and to cause them to disappear during the day. So we have both ‘Star’ and birds association with the suggestion of a permutation of more than a few shape shifting creatures to emulate. Looking at the word ‘murmuration’ it hasn’t escaped my attention that the same sounding root word ‘Mer’ means both ‘sea’ and ‘pool’ from the Latin ‘mare’ meaning ‘sea’. The word ‘pool’ can also mean ‘having a common interest, a combine’ which reminds us of how the starlings gather to form a common shape. Given that the starling is known to be a mimic, could it be also that its aggregate consciousness can emulate or mimic animals too? Playfully? For relevance? In association with such creatures in its environment? This would be a simple enough task for the ‘New Age’ interpretation of a Sanskrit Deva…. 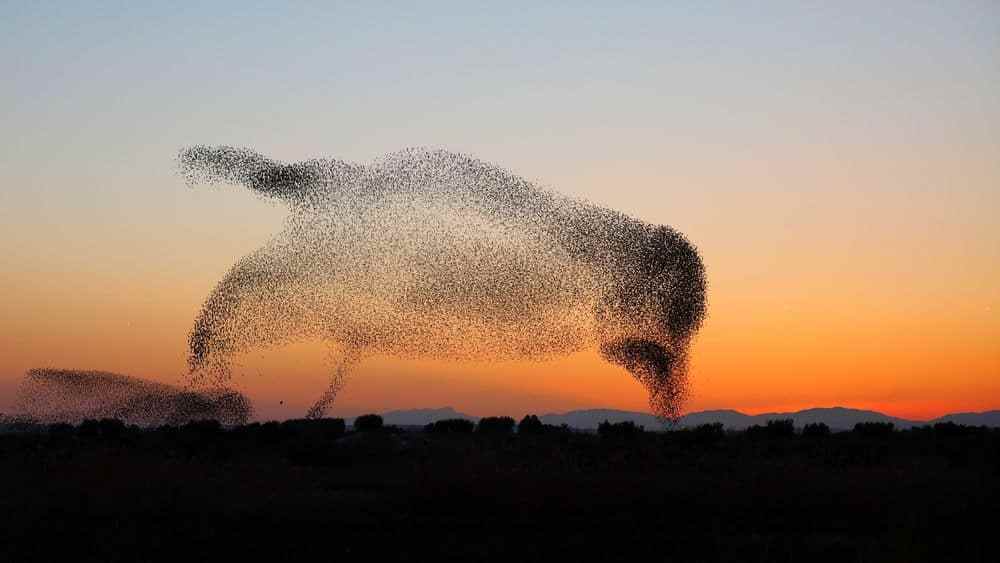 Separate to the evolution of humanity there are all types of Devas, a group soul of a species, designated with their own evolutionary duties to perform functions to assist our global ecology. In this case, why not an aerial Deva of the aggregate consciousness of starlings that could round them up and have them assemble any shape at will including some of the strangest images often captured on film that could be taking us to other levels. Some will say this is just a Theosophical belief whist others might see it as an explanation for why biologists cannot work out how the starlings use their senses and other data to interact with each other so rapidly and with a precision that evades as much as one solitary collision amongst the many flying thousands, and are left to conclude it a mystery. 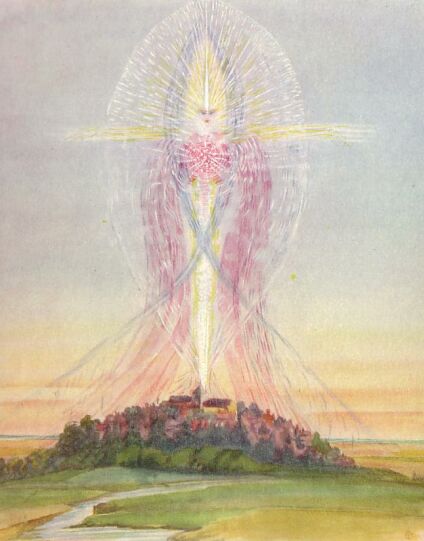