The Coronavirus pandemic has united the world in one common aim – survival. It’s not my remit to even try to be a doomsday merchant but I will look closer at the covert term allocated to this disease, employing the technique of the Lost Mother Tongue;

Coupled with the initial and best advice to combat the virus, washing hands, you might then accept; ‘The Time is at hand’. Ominous. When the Pope gave his Easter prayer to an empty St Peter’s Square, this fulfilled the biblical prophecy found in the book of Daniel and the gospels of Matthew and Mark  ‘…When the Abomination of Desolation stands in the holy place..’’

And so, yes, we can make the pieces it. Whether they will ever unfold into real episodes we can be less sure. With this in mind, I will now look at another feared global event, surely the most catastrophic, and the clues that might lead one into believing it will ever transpire.

To do so, we start with much of what has been my own research over the last 35 years, an endurance that has revealed, at least to me, that there is a tangible correlation – a ‘mirroring’ effect – between the global mystery of Rennes-le-chateau (although many simply conclude this as nothing more than a contrivance or hoax) and the Gothic Cathedral of Lincoln England. I have chosen the term ‘mirroring’ deliberately, alluding not to reversal but instead the magical properties of a mirror, as hidden in such literary works as ‘Alice through the looking glass’ and  historical occult testimonies, the ability to walk or step through the surface and experience other levels of reality.
There are two running themes that Rennes and Lincoln share in common. Firstly, in France, the promise of some great ‘treasure’, ‘Tresor’ in French, and a hint, some see, that the landscape hides a currently invisible Gateway to Heaven.

Pic 3 and 4;   Mary Magdalene above the porch at her church, (alongside)  A cross, or a dagger? (copyright B.Wilkinson)

This seemingly liable connection with a gateway, perhaps to the stars, has indications here also in Lincoln and it is noteworthy that landscapes both over at Rennes and at Lincoln, in geometrical  study, seem to duplicate, as spotted and plotted by Templar Mechanics.com. High above the porch at the Mary Magdalene church at RLC is a statue of Mary herself. Below her the biblical related inscription Terribilis est locus iste’ from the passage Genesis 28:17, involving an inference of a stairway, Jacob’s ladder, reaching up to heaven, and below that a motto ‘Lumen en Coelo’ that translates from the Latin, ‘Light in the Sky’. 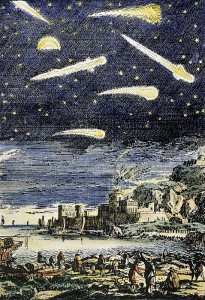 My theories suggest that the statue of this pained figure of the Magdalene shows her not holding a cross as one would expect, but that of a dagger incising into her body.  I have found this covert imagery elsewhere numerous times in various art works. Studies of cometary figures clearly show that certain comets do present as a dagger shaped object and we may also recall  Jesus in Matthew 10:34 stating ‘I did not come to bring peace, but a sword’ bearing in mind that a dagger is a short sword. If we then take the ‘Light in the sky’ as a comet it might well be that the greatest statement from the RLC mystery concerns a comet. 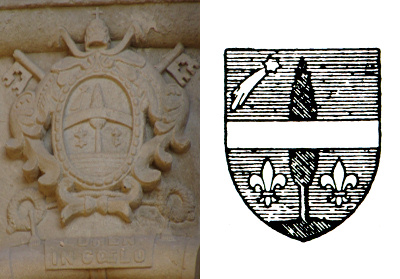 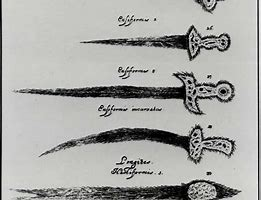 Given that the modern day appraisal of MM, replacing that of Isis, is an archetypical aspect of Mother Earth, the living body of the planet, could there be a suggestion of a comet (dagger) plunging into the planetary female body (Mary Magdalene)?  Is the state of our planet, currently heating up owing to climate change, passing through the oestrus cycle referred to as ‘on heat’, awaiting incoming fertilisation for a new birth? Although our natural viewpoint of such a happening would be an unwelcoming, concerned with devastation and viewed as bringing an extinction, we must also appreciate the greater, universal consequence of a comet re-seeding the planet and bringing about a new birth, the notion of panspermia, life on earth as having originated from a cometary bombardment causing amino acids to transform into peptides, the building blocks of life.

Coincidently at least, this was the conclusion arrived at by the late RLC author David wood in his 1994 book ‘Geneset – Target Earth’. In his eight years earlier controversial work ‘GenIsis, his trigonometrical geometry tracing over the landscape in the Rennes valley pinpointed a ‘womb’, possibly that of the earth. David’s eventual deduction from solving various other clues associated within the Mystery was that a cometary impact due in 2085 was the message left behind at Rennes for a future generation. This conviction resonates with the finalised conjecture of Graham Hancock in his book ‘Magicians of the Gods’ (2015)  where he speculates, with some amounts of evidence, that the return of what he calls the ‘Clovis Comet’ will provide a planetary impact anytime between 2020 and 2040. Graham also found warnings of this event via hieroglyphs at both Gobekli Tepe in Turkey and Egypt. Having worked with David for a while in the middle 80’s and being kindly invited to submit my own cometary work to Graham for inclusion on his website in 2016, I have to wonder if I am fated in a sense to have to go along with both their hypothesis.

Back at Lincoln, in the Cathedral and hidden under the seat of the Sub-Dean in the Choir Stalls, is a carving of a falling knight unseated from his horse. This fallen knight is found in the cryptic grail-seeking King of Naples Rene d’Anjou’s painting  ‘La Fountaine de Fortune’ which not only shows not only a stoop of black marble similar to a tomb opposite the Cathedral whereupon my very own ‘treasure hunt’ ends buried underneath, but also what appears to be a fuzzy sun in the sky. If so, then the shadows cast on the ground are all wrong as they are not in the same direction as they would be by a fixed sun. If it is the fuzzy orb that typifies comets, that’s another issue.

Is this the light in the sky that tallies with the carving above the RLC church porch? Within the church, and difficult to justify its presence, is that of Count St Germain, a legendary spiritual master of the ancient wisdom. He is perhaps best remembered for his comings and goings over unlikely long periods that defy natural age limitation. Comings and goings – this is the behaviour of a comet and is it simply coincidence that the French form of the word Count is Comte, an anagram of comet? (Not to mention Germain being a phonetic anagram of ‘manger’ – main-ger – the Christian symbol associated with the birth in the story of Jesus.)

Then there is the noticeable series of connections, some might say synchronicities, that tally with an earth-heaven assertion. In the Carl Sagan inspired 1997 movie ‘Contact’ with Jodie Foster, she makes contact off the face of the earth with another dimensional reality. Foster plays the character Ellie Arroway. In the classic 1968 movie ‘2001 -a Space Odyssey’ which ends with a star child being born, the central figure is called Bowman. Outside the Judgement Porch at Lincoln cathedral a Stoneman in 2002 placed his own creative work he entitled ‘Between Two Worlds’. It is a portal like structure (coincidently facing my ‘treasure’ marker tomb), and he also placed another of his works entitled ‘Portal 1’ inside of the cathedral, that has since been removed. This fine stonemason who has said he often works from the Collective Unconscious is Dan Michael Archer. An archer is actually classified and referred to as being a bowman! Furthermore, the objective of the archer is to hit the bullseye target, and David Wood’s book, recall, was called ‘Geneset – Target Earth.’ So, we have a Bowman appearing twice and an Arroway! 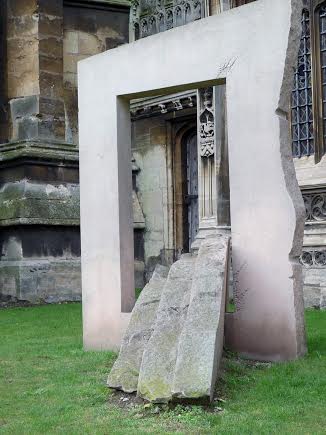 Pic 9; ‘Between two worlds’  Stepping through the mirror?

Now, let us look at the key word in all this, the French ‘Tresor’. May I suggest that at the directive of that marvellous mechanism Jung’s Collective unconscious that works through human agency when it so desires, we notice this word’s pronunciation, alternatively, sounds as ‘Tracer’.

A Tracer, is a thing that traces something, or by which something may be traced, a bullet or shell whose course is made visible by a trail of flames or smoke used to assist in aiming –  a kind of heat seeking missile – and a device that transmits a signal and so can be located when attached to a moving object.

All this seems to be describing a comet? All the jigsaw pieces fit, but is it the right picture? As with all examples of suspected prophecy, only the future will decide.