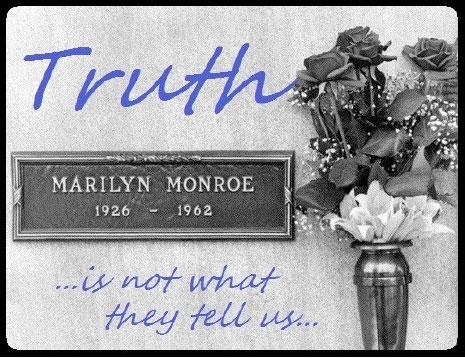 The long list of celebrity suicides may surprise you. We all know the very famous, troubled and rehabbed stars that ‘decided’ to end their lives for one desperate reason or another. Investigate how many there were, especially among lesser known stars and wonder…

…Are ‘they’ telling us the truth about their stars?

Hollywood stars and other famous celebrities from many countries in a wide variety of fields develop a following over time and sway a portion of the general public. When their empires or names or faces reach a high level of recognition, fame and popularity, a very striking thing occurs:

Their (studio/corporate/NY) owners swoop in and CONTROL and manage the ‘hot prospect’ or ‘shining one’ they’ve promoted for years even more!

Are you sure fame and fortune equate to freedom?

Is it possible (only asking) that big movie stars have no choice on what films they make; who they will marry; who their affairs will be; when they will divorce; where they will live; what they will look like and where their careers will go? Folks, it’s not talent that jets one into the stratosphere of fame or lack of talent that drops one down into the ‘toilet’ of obscurity.

When multi-millions of dollars are involved or even a billion bucks, these puppets appropriately called ‘minions’ (some have admitted to have “sold my soul to the Devil” like Dylan, Katy Perry & Roseann Barr) must probably ‘goose-step’ according to the whims of their handlers, producers and agents. No?

THESE ARE ACTORS, for the most part; they are very good at concealment of what they truly are or what they have done to become known…behind masks. Truth is: you might be tempted to lie, cheat and maybe ‘sacrifice’ IF the end result is millions of dollars given by the shadowy billionaires who run the world.

Maybe we’ve been ‘Milli-Vanillied?’ Did the Beatles write all their music? (We know Bob Dylan didn’t). Did we see a real Moon landing or a real 9/11? Maybe Michael Jordan wasn’t that great? It has come to light that even Shakespeare’s greatest works were written by secret committee.

Here’s the ‘theory’ and please YouTube ‘Satanic Hollywood’ and related information and videos along these lines. Most of you will be utterly shocked at how we once, very innocently, viewed things and how differently we now look at the same things only with a bit more knowledge and awareness on our side.

Examine the following gallery of celebrities that were ‘reported’ to have killed themselves. Did they? 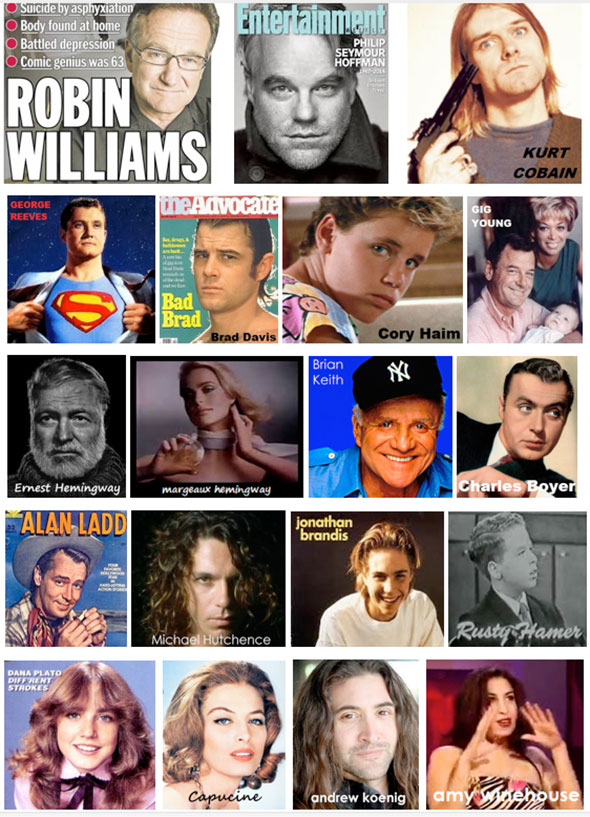 Show Business: a crazy industry (like others ruled by money/corruption) can drive anyone to hard drugs, nervous breakdowns and suicides. We’re told, “Fame is an addiction, applause is addicting.” What happens when a child television or film star receives the entire spotlight of attention that they do not deserve and believes the hype, then attempts and fails at a later acting career? What happens when friends and family want pieces of them and introduce them to all kinds of things that virtually tear them apart? Why not drink deep of dangerous luxuries and pleasures only offered to the rich and famous if the rare opportunity ever presented itself? Stanley Kubrick did. 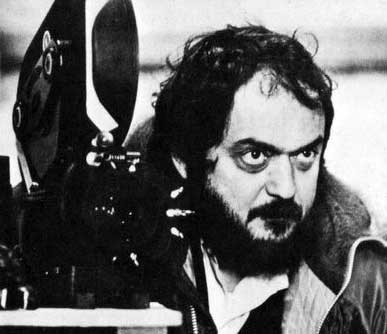 Sure, those ‘nutty celebs’ have big issues and been ‘used’ with early lives that none of us can imagine. They have super egos and demand attention. What pressure! But…

Was it like that in every case? Few believe George (Superman) Reeves committed suicide with a wiped pistol near his bed. We’ve heard about ‘type-casted’ and how a ‘Gone With the Wind’ star was not taken seriously after his role as Superman. Convenient.

Could it be that some stars have been driven into rehab and that it was not their idea in any way, shape or form? Maybe they had to and had no choice? Maybe they were trumped up on false charges and REHAB was a part of a redemption program? We’ll just put you in rehab for a while and let the public think these multiple factors have contributed to your…eccentricities? And maybe they are compelled (threatened) to go right along with whatever their handlers insist upon? We made you famous, we can take it away! Do you think the puppet-masters of the world have anything on their puppets?

How many of us want to believe that this SHOW behind the troubled celebrities is 99% lies, deception and merely phony publicity stunts? Who wants to know we’re fooled by television mind-control, commercials, media, music and Disney’s bright, colorful magic? Some celebs are worth more dead than alive. And maybe celebrity rehab is a public con job, for our benefit only, and in a few cases: a PRELUDE TO MURDER!

Randy Quaid, once a bright star, is now in virtual hiding (at last report) because he revealed that there is, in fact, a ‘Hollywood Hit Squad.’ Why? Why would ‘They’ kill their own property that they have pampered and glorified so much? Well…

Have you ever been in the CIA? You don’t just leave. Have you ever been part of the PERKS that go along with a Secret Society? If God-awful SECRETS have been almost exclusively revealed to you, it automatically follows that…

“…Now if you speak of any of this shit, we’re gonna have to kill you, kid.”

Ask Cory Feldman about sexual abuse with child stars and pedophilia in ‘the Industry.’ SOME children are put through the ‘wringer,’ a terrible and unspeakable ‘grind.’ No wonder child stars develop a few problems…

Here’s the truth: I don’t know what’s going on. But neither do you!

We have been made to think a certain way; it’s magical deception. We are made to look here and we do not see what is over there. I choose to not remain naïve and to discontinue viewing the world as a dumb child. I question what they tell us, which is our Universal Right. Question Everything. Everything good and wholesome should stand up to the harshest criticism.

If you are unaware of why Hollywood was called ‘Hollywood,’ then I have a little secret to tell to you. (I never took a blood oath for my silence of what I’ve pieced together on my own). Check old books of Witchcraft; you know those magical wands made of wooden branches you’ve seen in Harry Potter movies? They are only made from a certain bisexual plant: the holly plant. HOLLYWOOD is one big lie, one big Magical Mystery tour of deception exactly like politics and religion and much more.

Don’t believe what they tell us, good people.

This short article mentioned ‘Celebrity Suicides,’ but what of celebrity murders? What about famous people who were murdered under strange circumstances? Or the surprising number of celebrities who have lost their children or newborns or parents also under mysterious situations? YouTube might inform you why that is, right or wrong.

It boils down to the fact that we do not know the truth, the reality behind the scenes that we never see and that they never show us. What stands behind the curtain? Is it OZ or not a great and powerful being at all? Don’t we think we know these famous people because they have tugged at our heartstrings, influenced us and talked to us in films and on television?

You know why ‘they’ have put ALMOST ENTIRELY NOTHING BUT POLICE SHOWS ON TELEVISION? I figured it out. This is so you think some group of good guys are always there to snuff out every shred of corruption that exists. ‘Sports and elections and commercials aren’t lying to us’ because…well, there’d be a policing outfit of some sort that is always there and vigilantly looked out for the public’s welfare.

Grow up. In the words of controversial George Carlin (who also came to an odd end. I think they all did), “They don’t care about you.”

Oh they do snuff things out, but it is usually the elimination of real Truth, Justice and the Universal Way of natural goodness.

Lastly, here is a partial list of other famous people that supposedly all have committed suicide. Do you really believe each individual was suicidal? I’m sure many were and had genuine, severe problems. This author only questions: Were any actually murdered for various reasons while the public was made to believe suicide stories?

[If They SHOW it to us, we’ll believe anything they say without question].

One of the many suicide reports had this quote next to it: “There is some debate whether or not this was a suicide.” I think there should be SOME DEBATE in every case when a very rich and very famous person decides to throw everything away. 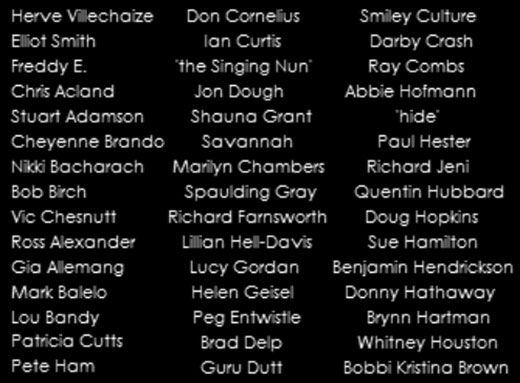 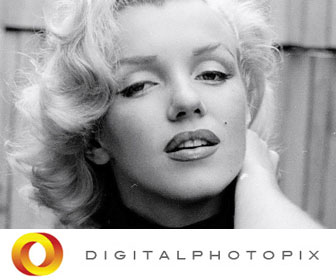 http://www.foxnews.com/entertainment/2015/09/29/jim-carrey-ex-girlfriend-cathriona-white-dead-suicide/
recent news of the ‘suicide’ of Jim Carrey’s girlfriend.
https://www.youtube.com/watch?v=eG9i7d8yfKQ  Carrey on Kimmel joking about the “Illuminutty.”
https://www.youtube.com/watch?v=hiasdUbGOho  Maybe this kid is telling the truth?
Wow. These concepts could be brand new to readers who would have a very hard time believing them. I got emotional writing this, not realizing how many tragic stories there really were to people we have heard of. As the article points out: we don’t want to know this; we don’t want to believe this is how the world works. Only a few days ago, Jim Carrey’s beautiful girlfriend supposedly ‘committed suicide.’ Why? The same excuse They give for everyone in the limelight: “They were troubled.” Another alternative is they found out exactly what they were dealing with and better shut-up about it, or else?
This author was motivated to write a very short story along these lines that may not be far from reality:
http://www.oom2.com/t32369-a-fateful-encounter-by-ts-caladan
Post Views: 49