The 1961 Goldsboro B-52 crash was an accident that occurred near Goldsboro, North Carolina, on 24 January 1961. A B-52 Stratofortress carrying two Mark 39 nuclear bombs broke up in mid-air, dropping its nuclear payload in the process. The captain ordered the crew to eject, which they did at 9,000 feet (2,700 m). Five men ejected and landed safely. Another ejected but did not survive the landing, and two died in the crash.

Controversy continues to surround the event on account of newly declassified information confirming in 2013 long-held, public suspicions that one of the bombs came very close to detonating.

In 2013, information released as a result of a Freedom of Information Act request confirmed a single switch prevented detonation.

Lt. ReVelle, speaking to a writer in 2011 of the bomb that nearly detonated, said:

“As far as I’m concerned we came damn close to having a Bay of North Carolina. The nuclear explosion would have completely changed the Eastern seaboard if it had gone off.”

He also said the size of each bomb was more than 250 times the destructive power of the Hiroshima bomb, and large enough to have a 100% kill zone of seventeen miles. Each bomb would exceed the yield of all munitions (outside of testing) ever detonated in the history of the world by TNT, gunpowder, conventional bombs, and the Hiroshima and Nagasaki blasts combined.

In 2013, investigative journalist Eric Schlosser published a book, Command and Control, in which he presented a declassified 1969 document obtained under the Freedom of Information Act. In the report, entitled “Goldsboro Revisited,” written by Parker F. Jones, a supervisor of nuclear safety at Sandia National Laboratories, Jones says that “one simple, dynamo-technology, low voltage switch stood between the United States and a major catastrophe,” and concludes that “The MK 39 Mod 2 bomb did not possess adequate safety for the airborne alert role in the B-52.”

In July 2012, the state of North Carolina erected an historical road marker in the town of Eureka, 3 miles (4.8 km) north of the crash site, commemorating the crash under the title “Nuclear Mishap.” 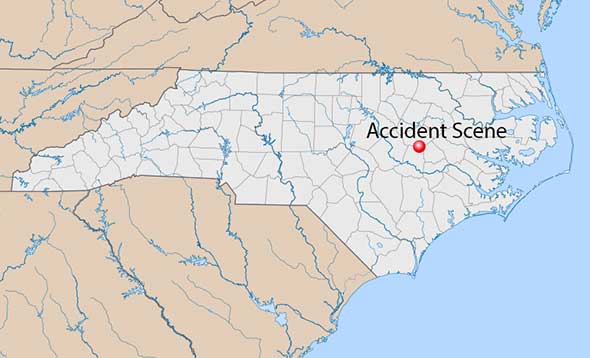 The aircraft, a B-52G based at Seymour Johnson Air Force Base in Goldsboro, was on a 24-hour “Coverall” airborne alert mission on the Atlantic seaboard. Around midnight on 23–24 January 1961, it rendezvoused with a tanker for mid-air refueling. During the hook-up, the tanker crew advised the B-52 aircraft commander, Major W. S. Tulloch, that his aircraft had a leak in its right wing. The refueling rendezvous was called off, and ground control was notified of the problem. The aircraft was directed to assume a holding pattern off the coast until the majority of fuel was consumed. However when the B-52 reached its assigned position, the pilot reported that the leak had worsened and that 37,000 pounds (17,000 kg) of fuel had been lost in three minutes. The aircraft was immediately directed to return and land at the base in Goldsboro.

As it descended through 10,000 feet (3,000 m) on its approach to the airfield, the pilots were no longer able to keep the aircraft in trim and lost control of it. The captain ordered the crew to eject, which they did at 9,000 feet (2,700 m). Five men ejected and landed safely. Another ejected but did not survive the landing, and two died in the crash. The third pilot of the bomber, Lt. Adam Mattocks, is the only man known to have successfully bailed out of the top hatch of a B-52 without an ejection seat. The crew last saw the aircraft intact with its payload of two Mark 39 nuclear bombs on board. The wreckage of the aircraft covered a 2-square-mile (5.2 km2) area of tobacco and cotton farmland at Faro, about 12 miles north of Goldsboro.

The two 2-2.5 megaton[a] MK. 39 nuclear bombs separated from the gyrating aircraft as it broke up between 10,000 and 2,000 feet (3,000 and 610 m). Three of the four arming mechanisms on one of the bombs activated, causing it to execute many of the steps needed to arm itself, such as charging the firing capacitors and, critically, deployment of a 100-foot-diameter (30 m) retard parachute. The parachute allowed that bomb to hit the ground with little damage. 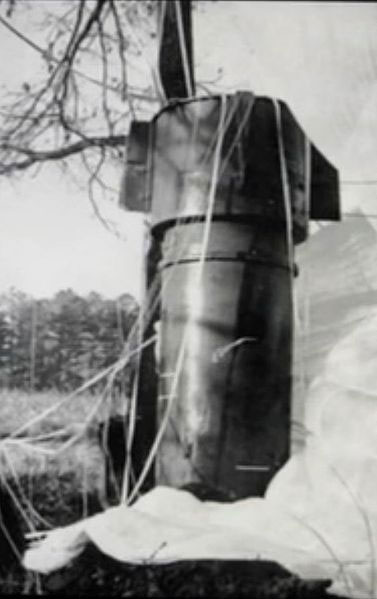 One of the Mk 39 nuclear weapons at Goldsboro, largely intact, with its parachute still attached.

The bomb that descended by parachute was found intact, and standing upright as a result of its parachute being caught in a tree. According to Jack Revelle, the bomb disposal expert who was responsible for disarming the device, the arm/safe switch was still in the safe position, though it had completed the rest of the arming sequence. The Pentagon claimed at the time that there was no chance of an explosion and that two arming mechanisms had not activated. A United States Department of Defense spokesperson told United Press International reporter Donald May that the bomb was unarmed and could not explode. Former military analyst Daniel Ellsberg has claimed to have seen highly classified documents indicating that its safe/arm switch was the only one of the six arming devices on the bomb that prevented detonation.

In 2013, information released as a result of a Freedom of Information Act request confirmed a single switch prevented detonation.

The second bomb plunged into a muddy field at around 700 miles per hour (310 m/s) and disintegrated without detonation of its conventional explosives. The tail was discovered about 20 feet (6.1 m) below ground. Parts of the bomb were recovered, including its tritium bottle and the plutonium. According to nuclear weapons historian Chuck Hansen, the bomb was partially armed when it left the aircraft though an unclosed high-voltage switch had prevented it from fully arming.

In 2013, ReVelle recalled the moment the second bomb’s switch was found. “Until my death I will never forget hearing my sergeant say, ‘Lieutenant, we found the arm/safe switch.’ And I said, ‘Great.’ He said, ‘Not great. It’s on arm.’”

Excavation of the second bomb was abandoned as a result of uncontrollable ground-water flooding. Most of the thermonuclear stage, containing uranium, was left in situ. The Army Corps of Engineers purchased a 400 feet (120 m) circular easement over the buried component. The University of North Carolina at Chapel Hill determined the buried depth of the secondary component to be 180 feet (55 m), plus or minus 10 feet (3.0 m).