A 28-minute film about the plight of children in Africa has been watched (in 4 days since it was posted on YouTube) more than 60 million times. But the charity behind it is facing criticism for its Hollywood-style campaigning (and funds management) on the issue. Are the criticisms fair?

Kony stands accused of overseeing the systematic kidnapping of countless African children, brainwashing the boys into fighting for him, turning the girls into sex slaves and killing those who don’t comply.
His forces are believed to have slaughtered tens of thousands of people and are known for hacking the lips off their victims.Kony has been wanted by the international criminal court since 2005 on charges that include crimes against humanity. He has been living in the bush outside Uganda since that time.

The US designated the LRA a terrorist group after September 11, and in 2008 began actively supporting the Ugandan military. In October, the president deployed 100 combat-equipped troops – mostly special operations forces – to Uganda to advise regional military units in capturing or killing Kony.

With its slick Hollywood production values, the film has been an almost instant viral success, dominating Twitter worldwide and having one of the fastest ever take-offs on You Tube. The hashtag #stopkony has had hundreds of thousands of tweets, and millions of people now know something about Uganda and what is happening to children there. Support for the campaign to end the conflict in the country this year is spreading.

“Yes, he [ J. Kony ] is real, and he’s probably a son of a gun big time… but having the American military sent to another country to “save” someone from the “bad guys” is becoming so common that is just disgusting. We heard the same thing in Serbia, Afghanistan, Iraq, Libya – “Humanitarian wars”. That’s bullshit.. US government just wants to use them as pretexts to justify an invasion and control those countries resources, in Uganda’s case: oil !!!”

WASHINGTON — U.S. President Barack Obama said Friday he has dispatched 100 U.S. troops to central Africa to support a years-long fight against a guerrilla group accused of horrific atrocities. Obama said they were sent to advise, not engage in combat, unless forced to defend themselves. In a letter to Congress, Obama said the troops will act as advisers in a long-running battle against the Lord’s Resistance Army, considered one of Africa’s most ruthless rebel groups, and help to hunt down its notorious leader, Joseph Kony. The first of the troops arrived in Uganda on Wednesday, the White House said, and others will be sent to South Sudan, the Central African Republic and the Democratic Republic of the Congo. […]  Source: http://www.ctv.ca/CTVNews/World/20111014/us-troops-africa-111014/#ixzz1b370zAiR

Uganda’s reserves include copper, tungsten, cobalt, columbite-tantalite, gold, phosphate, iron ore, and limestone. Gold, cobalt, and columbite-tantalite are mined. Gold is an important export, but it is complicated by the fact that gold has been smuggled into Uganda from the Democratic Republic of the Congo. Exploration for petroleum, which had long showed geological potential, particularly under Lakes Albert and Edward, proceeded slowly until 2006, when oil was struck. Significant quantities of petroleum were discovered in the Lake Albertine rift basin in 2008 and 2009. [ Source: Encyclopedia Britannica.] 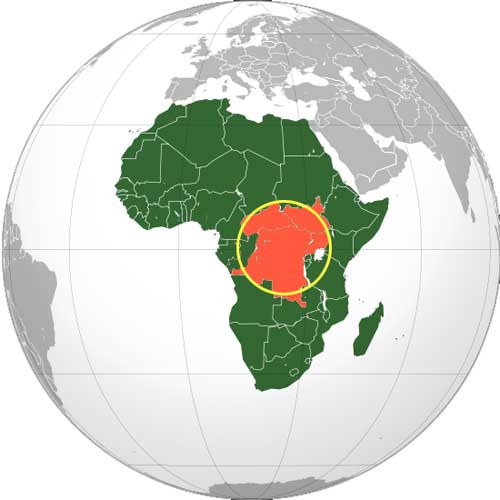 South Sudan, Uganda, Democratic Republic of Congo and The Central African Republic on the map of Africa

And if any mischief follow, then you shall give life for life, Eye for eye, tooth for tooth, hand for hand, foot for foot, Burning for burning, wound for wound, stripe for stripe. — Exodus 21:23-26

Madness of war (and it goes far beyond “an eye for an eye” ) can be illustrated with this simple facts: 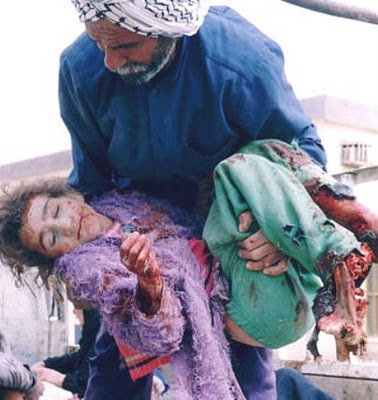 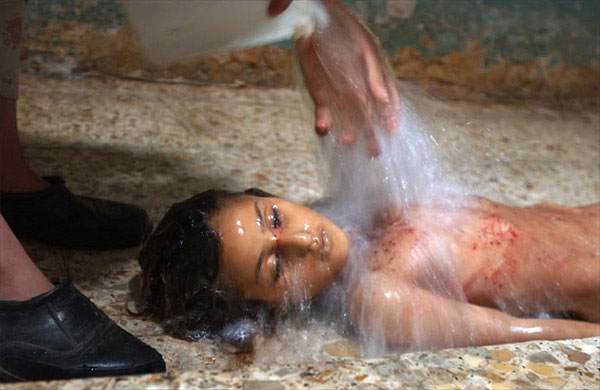 Photo by STEPHANIE SINCLAIR/Chicago Tribune. A mosque employee prepares the body of Lamiamh Ali, 6. Four siblings were playing outside their home in Baghdad when a U.S. cluster bomb exploded. Two of the children died that day and their brother died later as a result of his injuries.  Photo taken April 26, 2003. Source: Iraq: The unseen war 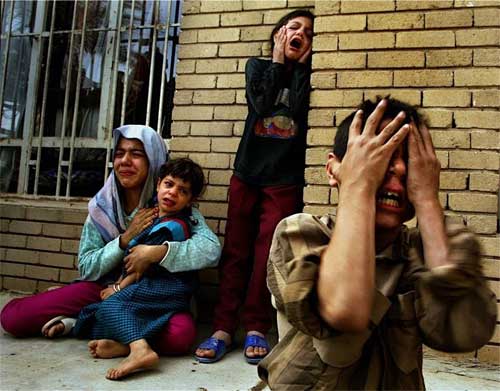 How many more will die if politicians create a war with Iran ??? (Population estimate for 2012: 78,868,711)  [ Note: There is big difference between “self-defense” and “preemptive war”. A preemptive strike is a military raid with a limited military objective which falls short of the objective of the initiation of all-out war. A preemptive war is similar to a preemptive strike, in that both are military strategies, involving an attack on an opponent suddenly when they are not prepared for an aggressive action. ]

Was it Worth it? 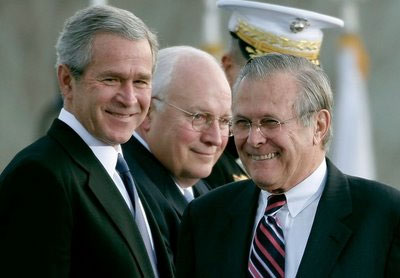 It seems obvious that none of these wars were about “justice” and helping oppressed people – it is always all about control and money.

Success of  “Kony 2012” Internet media campaign suggests we should use the Internet to “wake up” the people and achieve similar success in exposing (and removing from power) politicians who lead our countries to wars…  Keep it in mind when you vote for the next president in the upcoming elections.

A visitor’s comment: … Why are people scared to live by what our country was founded upon. […] Time for real change in D.C. If Paul doesn’t win, prepare for WW3. Best of luck to everyone.