Note: This essay is adapted from material in, The Grand Illusion Parts 1 & 2. Presented with author’s permission.

Since the basic structure of DNA-alkaline pairs and of language are of the same structure…one can simply use words and sentences of the human language! This…was experimentally proven! Living DNA substance…will always react to language-modulated laser rays and even to radio waves, if the proper frequencies are being used. This finally and scientifically explains why affirmations, autogenous training, hypnosis and the like can have such strong effects on humans and their bodies. [4]

Using correct light and sound frequencies, we can cause ‘jumping DNA,’ or transposons within the 97-8% of ‘junk’ DNA to move from one location to another and re-code the organism at the physical level.

During 1984-5, Gariaev made a startling discovery. He found that an in vitro DNA sample in a test tube had the ability to attract and harness coherent laser light, causing it to spiral along the DNA helix. This alone was unexpected, but it wasn’t all. After removing the DNA sample the photons continued to spiral as if the DNA was still there. This was dubbed the ‘DNA Phantom.’ Some ‘new’ field structure had been excited from the vacuum and was entraining the light even in the absence of the DNA. This effect has been observed to last for up to a month. Even after blowing the phantom away with gaseous nitrogen, it returns in 5-8 minutes. Gariaev et al. also remark that “sound waves radiated by the DNA molecules were registered in these experiments.” [5]

Our DNA harnesses both sound and light in its moment-by-moment operations, but more than this, it ‘punches holes’ in space-time, opening a window to time-space/the time domain: “…our DNA can cause [patterns of disturbance] in the vacuum, thus producing magnetized wormholes!…These are tunnel connections between entirely different areas in the universe through which information can be transmitted outside of space and time. The DNA attracts these bits of information and passes them on to our consciousness.”[6] Most of us know this process as intuition or psychic insight.

Various researchers have theorised that the energy occupying time-space responsible for these phenomena is twisting/spiralling torsion energy. Luckman defines torsion in Conscious Healing as:

Universal creative consciousness or subspace energy (Aether) experiencing itself in time…Torsion Energy in the form of a ‘life-wave’ interfacing with and modifying Potential DNA’s transposons is the driving force behind the evolution of human consciousness and physiology.

The first research generally credited with the discovery of this ‘fifth force’ was that done in the late 1800s by Russian professor N.P. Myshkin.[7] Dr. Eli Cartan first coined the term ‘torsion’ in 1913 after discovering that its twisting movement through the fabric of space-time is what gives rise to the helical structure of DNA. [8] 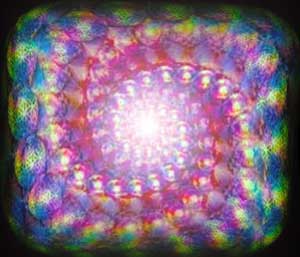 It appears that torsion energy and consciousness are one and the same, meaning that your consciousness must, by definition, survive the demise of your physical body! Shipov and Heim write that it has been “established that torsion generators allow us not only to replicate all ‘phenomena’ demonstrated by so called ‘psychics,’ but they also are able to demonstrate effects that were never demonstrated by any ‘psychic.’”[9]

This ‘transcendent’ energy that is intrinsically unrestricted by the bounds of our space-time can account for the well-documented remote healing phenomenon demonstrated in many studies, as well as more localised, short-range ‘mind over matter’ effects.

Cell biologist Glen Rein discovered experimentally that anger, fear, and similar emotions have the power to contract the DNA molecule, compressing it. On the other hand, emotions such as joy, gratitude, and love unwind or decompress DNA exposed to them. This effect could be created on samples up to a half mile away from the ‘sender’ of the emotion.[10] Years earlier in Russia, remote influence experiments with human targets presaged Rein’s results and proved that remote human intention could be used to effect physiological and conscious processes in a distant human target, as well as send telepathic messages.[11]

Pertinently, in another series of Rein’s, those with coherent electrocardiograms could wind or unwind the DNA at will, while those with incoherent heart energy could not. Further, in these experiments, simply feeling love-based emotions was not enough to effect the DNA samples—the intent to alter them had to be present.[12] “Rein’s research makes a direct connection between torsion energy and life-affirming emotions, particularly unconditional love, indicating that the latter literally propels evolution,” asserts Luckman. “Only the love-based emotions stimulate DNA to decompress so that messenger RNA can access codes for healing. Hatred, depression, boredom, and the like cause DNA to close down on itself, severely limiting access to genetic information necessary for healing as well as evolution.”[13]

The new physics explains that the act of thinking produces electrical currents that generate torsion waves of light—much as audible sound waves produce torsion waves of sound. Era III medicine, as Luckman puts it, is concerned with the primacy of bioenergetic consciousness in the sound domain (time-space) in healing and transformation (whereas Era II was primarily restricted to the light domain of space-time).[14]

As the Gariaev group have shown, sound and light can be utilised to re-write the genetic code: “They even captured information patterns of a particular DNA and transmitted it onto another, thus reprogramming cells to another genome. So they successfully transformed, for example, frog embryos to salamander embryos simply by transmitting the DNA information patterns!”[15]

Specific sound frequencies; herein lies the power of Luckman’s DNA potentiation/activation method. By utilizing just a 528 Hz Solfeggio tuning fork and the correct techniques (as detailed in Potentiate Your DNA), the massive portion of ‘junk’ DNA that seems to lay mostly dormant in us, can be activated to harness greater amounts of torsion energy in time-space. Ordinary sound in space-time can effect our info-energetic torsion blueprints in time-space via the interdimensional doorway that is our DNA. The result of this process—which unfolds over a forty-two week period—appears to be roughly equivalent to a kundalini awakening. The ‘fragmentary body’ (the second/sex chakra) is sealed, as a ninth (out of place) energy centre previously hovering above the head descends and ‘seals’ it, leaving the completed circuit of eight primary chakras, including the transpersonal archetypal chakra above the head (I elaborate on this in The Grand Illusion Part 1). Allergies disappear, serious diseases vanish, the body detoxifies, emotional baggage is purged, a sense of peace and well-being develops, and some people can even begin to sense their fundamental interconnectedness with creation (their separation consciousness—apparently caused by the fragmentary body—begins to give way to unity consciousness).

With the DNA acting like a tuning fork and resonating with the Solfeggio frequency, the ‘errors’ in the sonic torsion field blueprints (in time-space) for our biology are corrected. This information is then relayed back to our DNA, acting on the transposons/jumping DNA to re-write the gene code for the better.

Microbiologist Colm Kelleher has studied ‘junk’ DNA for years. He states that transposons are known to be engines of evolution. He explains that, if one wanted an extremely rapid and large-scale change in physical structure…then a simultaneous transposition burst is the most plausible mechanism…Similar mechanisms might be involved during and after the kundalini experience.[16]

Kundalini has always been held in high esteem by mystics and seers because of its ability to awaken higher consciousness and vivify and restore the physical body. It upgrades the bioenergy system. Kundalini experiencers often describe an incredible white light enveloping their consciousness—a function of increased sonic torsion energy from time-space as it is translated into space-time (brain-based) awareness?

One of the things that struck me in researching these topics was the similar aftermath of DNA (and kundalini) activation as compared to the near-death experience (NDE). Many NDEers have subsequently reported that they too experience a deeper sense of connectedness with all things, higher levels of empathy, greater peace, and even the spontaneous resolution and disappearance of serious diseases—including cancer. They also find quite often that their psychic faculties are put into overdrive—whether they like it or not! (I expand on these themes in detail in The Grand Illusion Part 2.) I have to wonder if the NDE can also precipitate the sealing of the fragmentary body by revealing to people their true nature as ‘spirit’ and an integral part of the whole of multi-dimensional reality, remedying their ‘separation consciousness.’

In 1996, Kelleher cloned a stretch of human DNA from activated human T-cells. He found the structure to consist of a tandem array of transposon sequences “arranged like beads on a string—in short, the perfect structure that I had been envisioning to accomplish a large-scale speciation-type change.” He predicts that people who have undergone NDEs or have meditated for long periods, “should have a higher transcriptional level of this transposon cassette.”[17]

Perhaps we have identified three major ways to seal the fragmentary body and activate our latent jumping DNA to effect dramatic personal transformation: DNA activation with Solfeggio frequencies; kundalini awakening; and NDEs (don’t try this at home). Thank goodness for the ‘junk’ that Nature didn’t throw away!

Brendan is a full-time researcher and the author of the forthcoming paradigm-shifting The Grand Illusion book series merging science with metaphysics to create a profoundly different worldview from the accepted materialistic paradigm. To stay updated on developments visit the new Brendan D. Murphy fan page on Facebook: www.facebook.com/pages/Brendan-D-Murphy-Fan-Page/230054977033102