The galaxy Messier 101 (M101, also known as NGC 5457 and also nicknamed the Pinwheel Galaxy) lies in the northern circumpolar constellation, Ursa Major (The Great Bear), at a distance of 25 million light-years from Earth. This is one of the largest and most detailed photo of a spiral galaxy that has been released from Hubble. The galaxy’s portrait is actually composed of 51 individual Hubble exposures, in addition to elements from images from ground-based photos. Date     2006-02-28.  Source:  made by NASA, taken from http://hubblesite.org/newscenter/newsdesk/archive/releases/2006/10/image/a.  Credit for Hubble Image: NASA and ESA

Our Solar System is part of the Milky Way galaxy, a barred spiral galaxy 100,000–120,000 light-years in diameter containing 200–400 billion stars. It may contain at least as many planets, with an estimated 10 billion of those orbiting in the habitable zone of their parent stars. [ Source: Wikipedia] 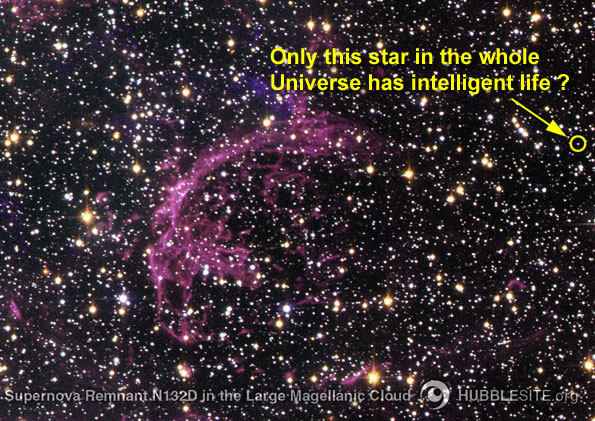 In the context of billions of stars in just a single galaxy, the above statement/question sounds very dumb, doesn’t it?

To suppose that earth is the only populated world in infinite space is as absurd as to believe that in an entire field sown with millet, only one grain will grow. — Metrodorus of Chios, 4th century B.C

We invite you to share your personal moment of realization that there may be intelligent life on other planets. Simply add your thoughts as comments to this post.

This website presents many articles/posts suggesting that there is intelligent life beyond our planet.

These are the main categories:

According to Ancient Astronauts theory, human species was created in the likeness of “gods”.  We are the Anunnaki’s sons, and have been given a push in our development by those minor gods. We are not alone in the Universe, and there exists Entities that are more advanced than us. Those Entities have been watching us and visiting periodically our Planet. All our Religions, that in a certain way teach basically the same, need to be reformulated, as in some cases we have been calling god some of those higher Entities

All that, and much more, is engraved in thousand of tablets that have survived for more than 5.000 years, preserved in the best possible way, as burnt clay! Those clay tablets were cooked by the fire of the library of Nineveh, and by that abnormal fact, were then given an extra resistance to endure time! The big question is then, who is the Anunnaki’s God? The real Universal God?

The Real Universal God is a much more abstract one and is the togetherness of all Universal Consciousness. The Holly Spirit, the togetherness of all consciousness, is the Universal God, but by being such an abstract idea people have tended to forget, and revert to more humanized types of gods. Quantum Theory tells us than man go on creating his own world, and in it resides the source of man free will. We can by our conscience influence the way the wave will collapse. Everything being waves means we are all part of a Universal net, where anyone influences everyone! Evil is a man’s creation.The USA Military and economic cartels have kept some very important discoveries, particularly in the field of Energy generation, hidden from us, for more than 40 years.[ — José de Faria e Maya ]

The idea that there is intelligent life (perhaps much more advanced than us) outside of our Solar System is seriously considered by some of our brightest scientists.

The Search for ExtraTerrestrial Intelligence (SETI) is the collective name for a number of activities people undertake to search for intelligent extraterrestrial life. Some of the most well known projects are run by Harvard University, the University of California, Berkeley and the SETI Institute. SETI projects use scientific methods to search for intelligent life on other planets. For example, electromagnetic radiation is monitored for signs of transmissions from civilizations on other worlds. The United States government contributed to early SETI projects, but recent work has been primarily funded by private sources.

There are great challenges in searching across the cosmos for a first transmission that could be characterized as intelligent, since its direction, spectrum and method of communication are all unknown beforehand. SETI projects necessarily make assumptions to narrow the search, the foremost being that electromagnetic radiation would be a medium of communication for advanced extraterrestrial life…

The SETI Institute does not officially recognise the Wow! signal as of extraterrestrial origin (as it was unable to be verified). The SETI Institute has also publicly denied that the candidate signal Radio source SHGb02+14a is of extraterrestrial origin though full details of the signal, such as its exact location have never been disclosed to the public. Although other volunteering projects such as Zooniverse credit users for discoveries there is currently no for crediting or early notification of SETI@Home following the discovery of a signal.

Some people, including Steven M. Greer, have expressed cynicism that the general public might not be informed in the event of a genuine discovery of extraterrestrial intelligence due to significant vested interests. Some, such as Bruce Jakosky have also argued that the official disclosure of extraterrestrial life may have far reaching and as yet undetermined implications for society particularly for the world’s religions. Assessing this impact is the intention of the IAA’s Rio Scale and these factors present a real motive for withholding the information from the public.

We invite you to share your personal moment of realization that there may be intelligent life on other planets. Simply add your thoughts as comments to this post.