How scientists believe our moon came into existence.

Several mechanisms have been proposed for the Moon’s formation 4.527 ± 0.010 billion years ago, some 30–50 million years after the origin of the Solar System. These included the fission of the Moon from the Earth’s crust through centrifugal force, which would require too great an initial spin of the Earth, the gravitational capture of a pre-formed Moon, which would require an unfeasibly extended atmosphere of the Earth to dissipate the energy of the passing Moon, and the co-formation of the Earth and the Moon together in the primordial accretion disk, which does not explain the depletion of metallic iron in the Moon. These hypotheses also cannot account for the high angular momentum of the Earth–Moon system.

The prevailing hypothesis today is that the Earth–Moon system formed as a result of a giant impact: a Mars-sized body hitting the newly formed proto-Earth, blasting material into orbit around it, which accreted to form the Moon. Giant impacts are thought to have been common in the early Solar System. Computer simulations modelling a giant impact are consistent with measurements of the angular momentum of the Earth–Moon system and the small size of the lunar core; they also show that most of the Moon came from the impactor, not from the proto-Earth. More recent tests suggest more of the Moon coalesced from the Earth and not the impactor. Meteorites show that other inner Solar System bodies such as Mars and Vesta have very different oxygen and tungsten isotopic compositions to the Earth, while the Earth and Moon have near-identical isotopic compositions. Post-impact mixing of the vaporized material between the forming Earth and Moon could have equalized their isotopic compositions, although this is debated.

The large amount of energy released in the giant impact event and the subsequent reaccretion of material in Earth orbit would have melted the outer shell of the Earth, forming a magma ocean. The newly formed Moon would also have had its own lunar magma ocean; estimates for its depth range from about 500 km to the entire radius of the Moon.

If we had no Moon

The Moon is Earth’s only natural satellite and is the fifth largest satellite in the Solar System. It is the largest natural satellite in the Solar System relative to the size of its planet, a quarter the diameter of Earth and 1/81 its mass, and is the second densest satellite after Io. It is in synchronous rotation with Earth, always showing the same face; the near side is marked with dark volcanic maria among the bright ancient crustal highlands and prominent impact craters. Despite being the brightest object in the sky after the Sun, its surface is actually very dark, with a similar reflectance to coal. Its prominence in the sky and its regular cycle of phases have since ancient times made the Moon an important cultural influence on language, the calendar, art and mythology. The Moon’s gravitational influence produces the ocean tides and the minute lengthening of the day. The Moon’s current orbital distance, about thirty times the diameter of the Earth, causes it to be the same size in the sky as the Sun allowing the Moon to cover the Sun precisely in total solar eclipses.

The Moon is the only celestial body on which humans have made a manned landing. While the Soviet Union’s Luna programme was the first to reach the Moon with unmanned spacecraft, the United States’ NASA Apollo program achieved the only manned missions to date, beginning with the first manned lunar orbiting mission by Apollo 8 in 1968, and six manned lunar landings between 1969 and 1972 the first being Apollo 11 in 1969. These missions returned over 380 kg of lunar rocks, which have been used to develop a detailed geological understanding of the Moon’s origins (it is thought to have formed some 4.5 billion years ago in a giant impact), the formation of its internal structure, and its subsequent history.

Sumerians knew this thousands of years ago…

INCONVENIENT NEWS FROM THE MOON

News, as much of everything else, needs luck to succeed. News, more than anything else, has no chance of success if it is inconvenient- and especially so, if it happens to be true.

A case in point: Latest discoveries concerning the Moon.

The Moon – Earth’s constant companion – has baffled modem astronomers all along. It is much too large to have been Earth’s natural satellite, yet it is almost as old as the Earth. How did it come about? The prevailing  explanation is The Giant Impact Theory: An errant celestial body (an asteroid, a meteor) struck the Earth and threw off a piece of Earth that in time rounded itself out to be the Moon (see illustration  A). There have been problems with this explanation: The Moon’s should then be, but is not, similar to that of Earth. And what happened to the impactor? The answer was: it evaporated in the immense beat caused by the impact. Not really convincing, especially since recent calculation show that the “meteor” had to be about the size of the planet Mars …
In my books The 12’h Planet and Genesis Revisited I said: How about the Sumerian Scenario? Treating the ‘Epic Qf Creation’ not as an allegorical myth but as a sophisticated cosmogony, the ancient text spoke of a celestial collision in which an invader (Nibiru) destroyed the large and watery planet Tiamat, causing half of it to become the Earth and its main satellite to become Earth’s Moon (illustration B). That’s what I said.

Did any astronomer pay attention? If at all, then not publicly, for acceptance meant accepting Nibiru and the Anunnaki and Extraterrestrials, and the rest of that nonsense … 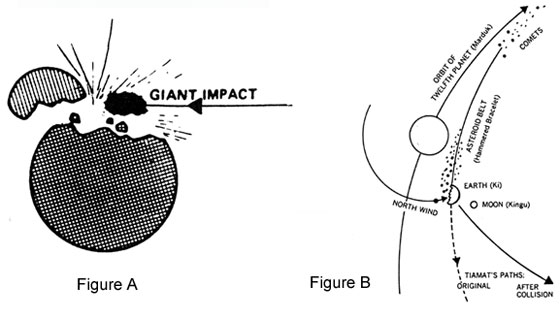 Now, tucked away on page 170 of the 10th of  July 2008 issue of the journal Nature I came across a headline that should be on the front page of all major newspapers (but is not): THE EARLY MOON WAS RICH IN WATER.

As the prestigious journal itself explains, a group of six American scientists, using new technologies, have found evidence in Moon rocks that when the Moon formed, it had water among its ‘volatiles’. By ‘volatiles’ scientists refer to basic components that evaporate when subjected to heat. As the journal points out in the introduction to the scientific report, the volatiles had to evaporate in the great heat created if a “Mars-sized body” hit the early Earth. The new data runs “counter to the classic image of lunar geochemistry,” the journal admits. This is a scientific revolution. But I know of no major newspaper, radio or TV channel, or just a wire service, that has picked up this sensational but inconvenient news. So, as I was saying in my books …