Geometry (Ancient Greek:  geo- “earth“, -metron “measurement“) was originally dealing with measuring of the earth.  Today, geometry has wider meaning: it is a branch of mathematics concerned with questions of shape, size, relative position of figures, and the properties of space. Geometry arose independently in a number of early cultures as a body of practical knowledge concerning lengths, areas, and volumes, with elements of a formal mathematical science.

Measuring circumference of the Earth

Here is simple method of establishing circumference (and diameter) of the earth that (most likely) was used by the ancient astronomers.

This method is based on understanding that Earth, just like the Sun and the Moon, is also round and that stars are very far from our planet (except for the Sun) and they appear to rotate around certain point above the northern horizon (the North Celestial Pole).

The measuring process should be done in areas with good visibility of the sky, e.g desert landscape.

On the same night, 2 astronomers at two different locations (A and B) separated by known distance (it is easy to measure ground distance between points located hundreds km away from each other), would measure the angle above the horizon (with help of the astrolabe with vertical line given by a plumb-bob) of  a certain star at its highest position on the night sky (therefore at the same time.)

A star close to the celestial North Pole (indicating the center of Earth’s rotation axis) would be a good choice for such purpose. In modern days Polaris would be the best choice, however thousands of years ago, due to precession (wobble of the earth axis of rotation), Polaris was not near the North celestial pole (see the image below). 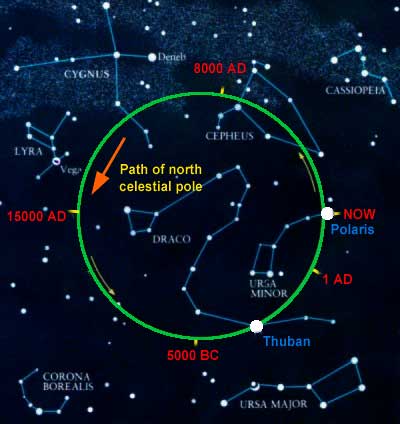 Although Polaris, the north star, sits within half a degree of the north celestial pole, this was not always so. Earth’s rotational axis undergoes a slow, 26,000-year wobble, known as precession, around the perpendicular to its orbit around the Sun, as a result of which the position of the sky’s rotational pole, around which all the stars seem to go, constantly changes. Around the time of the Greek poet Homer, Kochab was the north pole star. Among the best ever, however, was Thuban, which was almost exactly at the pole in 2700 BC. It remained better than Kochab up to around 1900 BC, and was therefore the pole star during the time of the ancient Egyptians. Other bright stars, including Alderamin, have served as pole star, and will again in the remote future. The star currently closest to the south celestial pole is Sigma Octantis, which is barely visible to the naked eye and lies 1º 3′ from the pole (though it was as close as 45′ just a century ago). [ Credit: The Encyclopedia of Science ]

Careful observation of the night sky would allow to select a bright star (s) most suitable for comparison of altitude of the same star at different location. 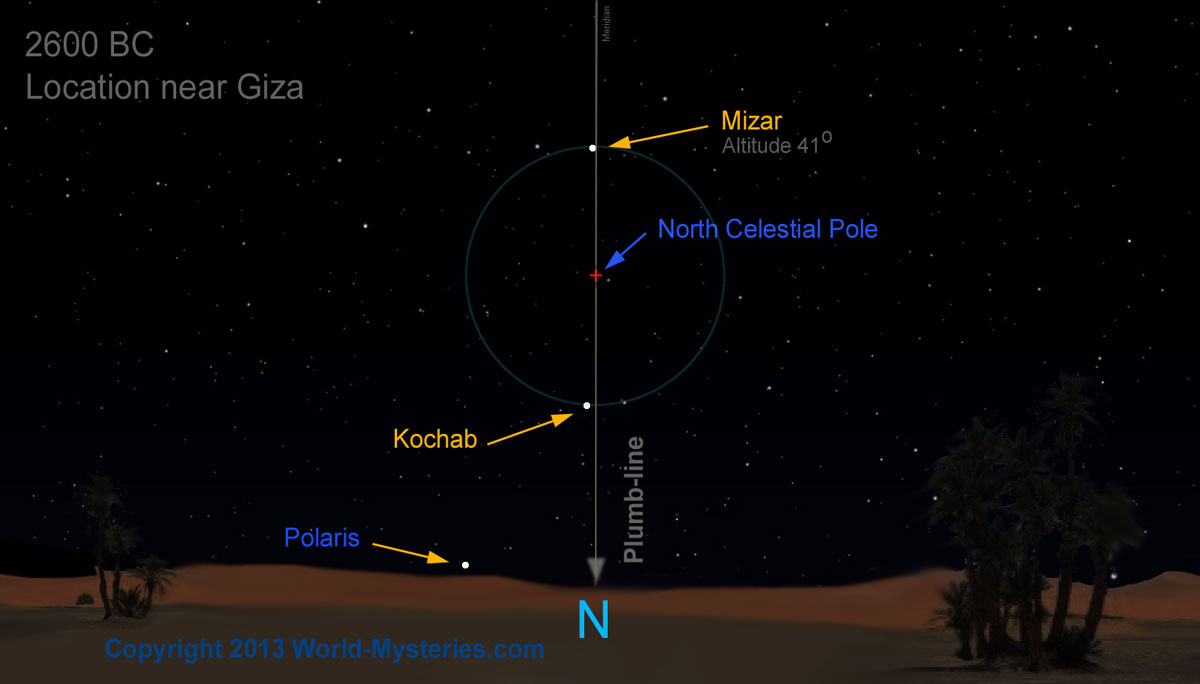 For example, 2,600 BC (see image above) near Giza, when Mizar and Kochab (rotating each night around the North celestial pole) would align with  vertical line (marked by a plumb-line), Mizar (with easy to measure altitude) would be perfect star for comparison of its altitude at different locations (A and B) – at the same time). 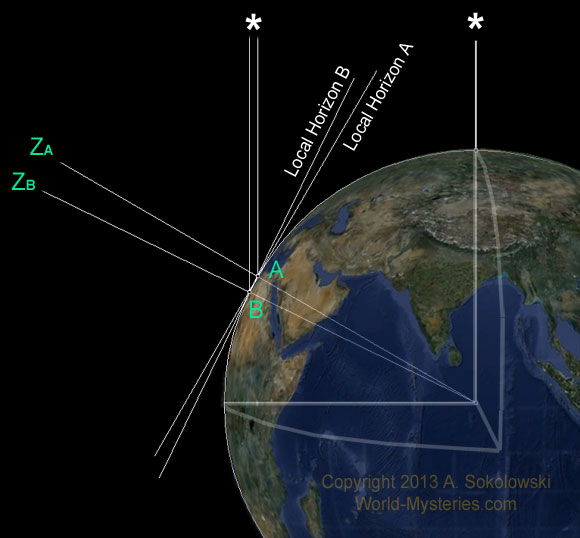 Because the stars are too far from the earth for any parallax effect (a displacement or difference in the apparent position of an object viewed along two different lines of sight), the only reason for the change in the measured angle of the northern star is the curvature of the earth.

From this equation: Circumference of the Earth = AB * 360/(Angle A-Angle B)

Apparent mean angular diameter of the Moon and the Sun is almost the same: 0.5 degree (about 30 arcmin).

Our astronomer/priest should have no problem observing/measuring position of the northern star with accuracy of 1/4 degree or better.
Using simple angle measuring instrument (astrolabe) calibrated in degrees, he could obtain fairly accurate results (perhaps 0.25 degree accuracy or better). 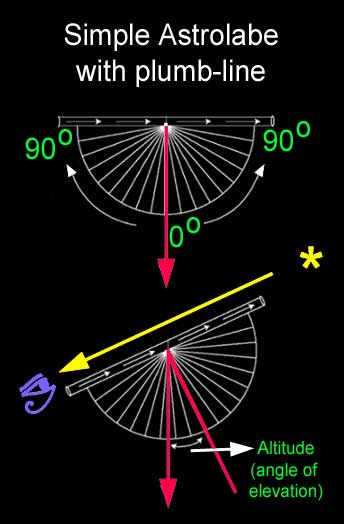 FOR EXAMPLE: If one of our astronomers were doing this measurement from location (A) near Giza ( 300 N ),  Mizar would appear about 41 deg above the local horizon.  If the second astronomer were located 120 nautical miles* south from A (* measured in ancient units of length, of course), he would observe that the altitude of the  same star is 39 degrees (2 degrees lower than altitude measured at the location A).

Measuring distance between A and B was done ( in ancient units of length ) with use of an odometer as described by Vitruvius.

These 2 simple measurements (AB land and angular distance ) would allow ancient astronomers calculation of the circumference of the Earth with fairly high accuracy:

Note: The angular distance between two points ( A and B ) could also be established by measuring length of noon shadows of an obelisk at both locations, on the same day. 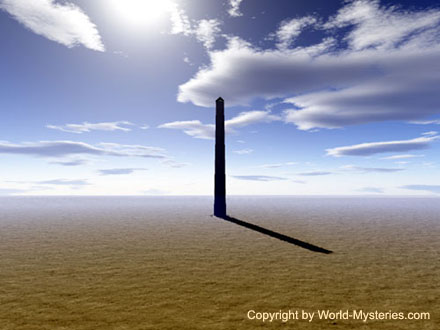 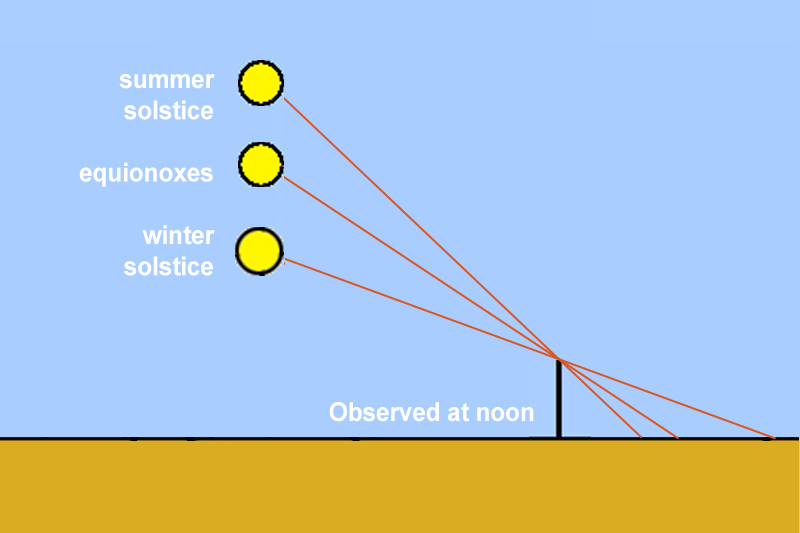 Copyright 2013 A. Sokolowski
Presented with permission
Any duplication requires proper copyright information
and link to the original article.

Modern units of measure are connected with the SIZE of our planet. 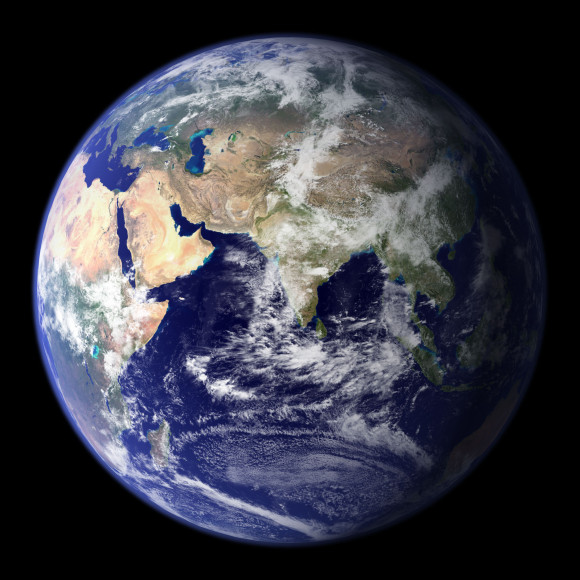 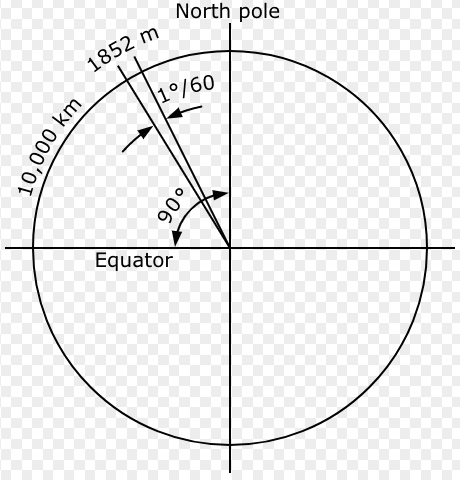 Pliny’s estimate of earth’s size was very close to the modern official value:

Radius of such circle would be calculated as 1,296,000 divided by (2xPi) which is equal to 20.62648 x 10,000 units.
Coincidentally 20.626 inch is extremely close approximation of 1 Royal Egyptian Cubit, unit of length used during construction of the pyramids of Giza.

Of course it is more likely that ancient priests created the Royal Cubit ( REC ) based on their estimate of the circumference of the Earth and division of the Radius into 12,000,000 units.

Sometime in remote antiquity, somewhere in the Middle East, someone devised a method for dealing with circles:
He said there are 360 degrees, 21,600 minutes, 1,296,000 seconds in a circle.
This rule is true regardless of the size of the circle: one inch diameter or a million miles. As such it has no mathematical dimension.

The number 206,265 is used by astronomers to estimate celestial objects that are at great distances. For example One Parsec is equal to 206,265 AU, where AU is the distance from the sun to the earth.
However, our interest is terrestrial, not celestial. We can take the number of units in the radius of a circle and massage it into a form that is much easier to manipulate. We do this by reducing the size of the number.
We can divide this number by 10,000.
The number 10,000 would not occur naturally, by itself. It is a number devised by intelligent mind.

The fact that 10,000 is so neatly suited to our goal makes it outstanding as an intelligent step in our process.
We get 20.626,480 units.
This number is purely intellectual. It has no basis in the literal world. It is defined mathematically.
We should remember that this number is defined as a distance along the radius of the circle which constitutes our intellectual framework.
I shall now show why this is such a startling number.

20.626+ is the length of a Royal Egyptian Cubit in English inches, now accepted in the scholarly world.
Within our ability to measure, the two numbers are identical, one an intellectual creation from long in the past, the other a measured length.

Looking at the chart below we can see why Plato said the numbers 5 and 6 did “honour to the odd and even”.

Taking the circumference of the world as 360º, each degree comprises 60 “geographic” or “nautical” miles.
We can then choose to divide the geographic mile by 6,000 for geographic feet, or by 5,000 for Egyptian remen. 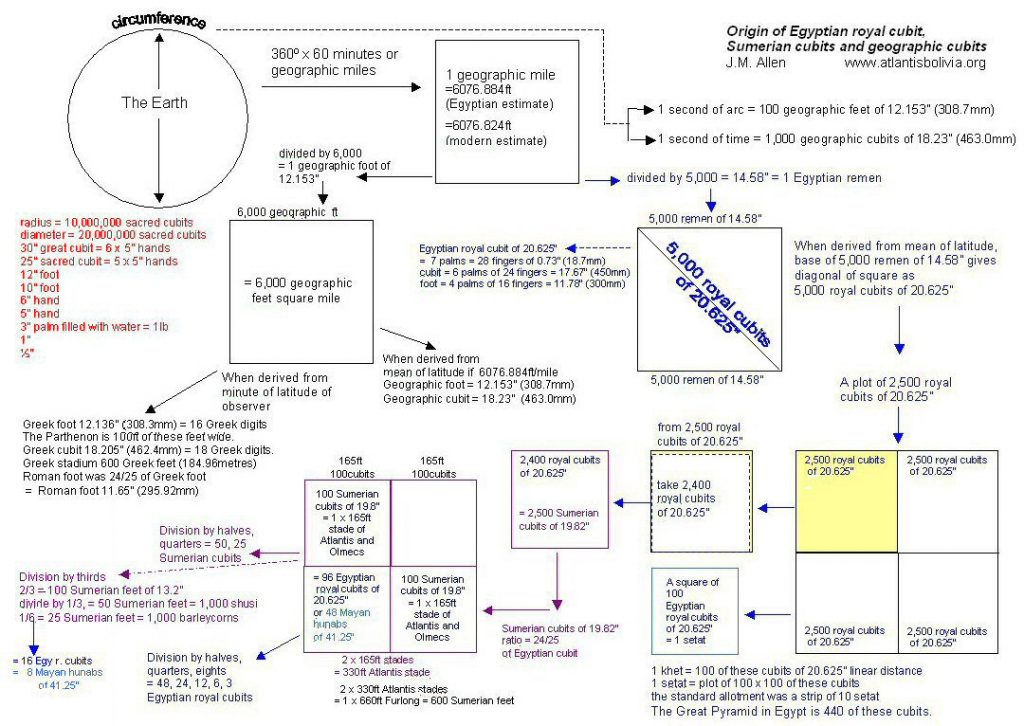 In the above chart, the Greeks to calculate the Greek foot used a 1/6,000th part of a minute of latitude in Greece.

The differences arose depending on your preferred mathematical method, whether you divided by halves, quarters or eighths or by thirds …
while the Babylonians/Sumerians generally preferred 60’s, the Egyptians 10’s and the Mayans 20’s ….