Remember the 1996 movie: “The Arrival” with Charlie Sheen? [Zane, an astronomer, discovers intelligent alien life. But the aliens are keeping a deadly secret, and will do anything to stop Zane from learning it]. A 2016 version of the film will soon be released… 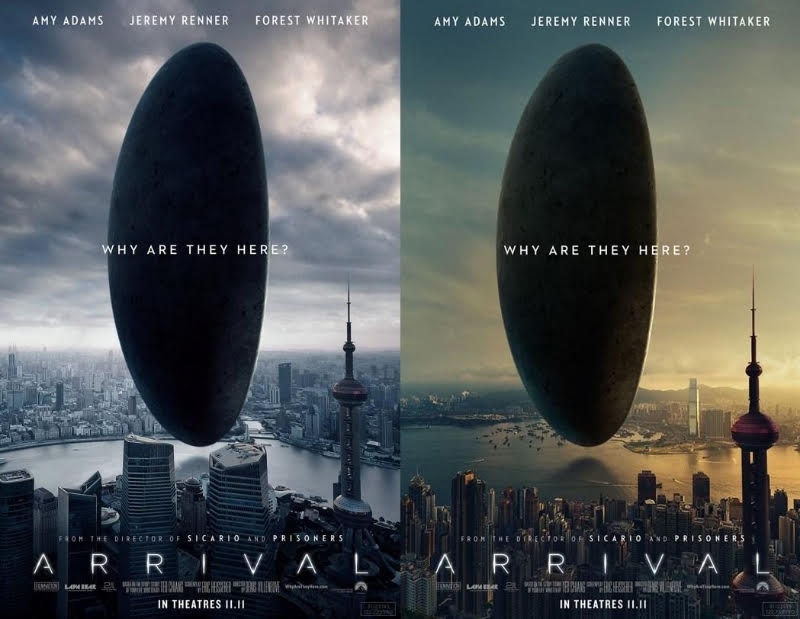 “When mysterious spacecraft touch down across the globe, an elite team – lead by expert linguist Louise Banks – are brought together to investigate. As mankind teeters on the verge of global war, Banks and the team race against time for answers – and to find them, she will take a chance that could threaten her life, and quite possibly humanity.”

Three trailers are available now with a release date of 11/11 for the full film. In the new “Arrival,” TWELVE strange, giant, alien objects (almost out of “Alien”) land or nearly touch the Earth. This author and researcher of ancient mysteries immediately noticed WHERE the ships (“objects”) basically landed: They landed so very close to my “Atlantean World Grid” points on the globe that I have been talking and writing about for over 40 years!
Readers of the former “Doug Yurchey” are well aware of his theorized 13-Point Power Grid or Atlantis stations or ancient, electro-magnetic energy Grid, based on Nikola Tesla’s wireless principles. This differs with the grids of Bruce Cathie and Karl Munck and numerous others, which usually have more global points or sub-stations.
Compare the best “shot” I could download of the big board in the new “Arrival” movie as Bank’s team tracked the 12 landing areas of the aliens: 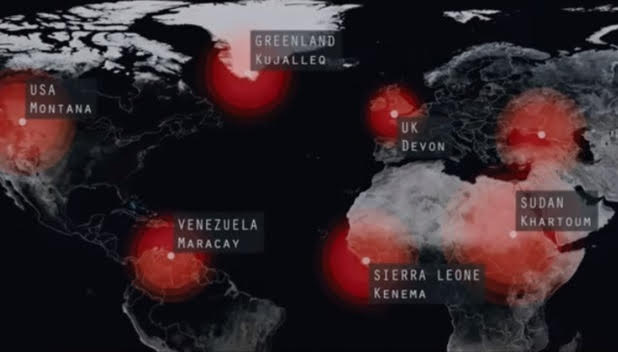 More of the right side is seen in the trailer. View my old map from 1974, published in magazines and posted online more than 14 years ago, that has gone through various drawings over the years: 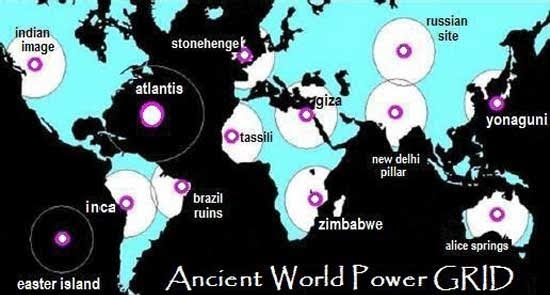 Eliminate the main Power Station on sunken continent in Bermuda Triangle area. My World System is a network of 12 sub-stations and one prime Station. If we look at only the 12 sub-stations that I’ve written about for decades, there is a resemblance to the alien landing spots in the film. Few people have realized the importance of the Global Grid and made the Tesla connection.
Virtually no one is listening or believing my theories on how Life ARRIVED on Earth. But…

Is the government or more precisely: the Puppet-Masters of Hollywood listening and believing me?
Possibly big producers know about the World Grid that is unknown to the general public?
The aliens in the new film could have arrived anywhere; they almost chose my Grid areas.
Did they need the Ley-Line, electro-magnetic energy still in the ground?
Were they inspecting prehistoric, EM power-centers and the high-tech history of early humans?
Are the locations important in the plot of the story? Why those areas, are they special for some reason?
We’ll see…
Aliens in the new “Arrival” could have come here in 3 ships or 15 ships or 1500. Why TWELVE “objects” and so near my 12 sub-stations? See the trailer. Let’s go through the “fiction” and view how the areas parallel the theorized areas of human origin or “Cradles of Civilization.”
From the trailer, in time, the locations of the alien’s near-landings seem to each have produced a local, human representative(s). On a communications board, Bank’s team appears to be in touch with the 12 delegates. Graphics on the screen label them: “Denmark,” “USA,” “Australia,” “Pakistan,” “Venezuela,” “Japan,” “China,” “Sierra-Leone,” “Sudan,” “Black Sea,” “UK” and “Siberia.”
No. It’s not a perfect match to the sub-stations of my Grid from 1974, but it is close…
The landing area in the U.S. is northwest, very north, almost in Canada, which corresponds to the southern Canadian location. The British location is obviously near Stonehenge. Easter Island is not portrayed in the film’s near-encounters. Neither is the Great Pyramid (odd), although “Sudan” is just below Giza. There is only the “Venezuela” location in South America, where I have one for the Incas and one grid-point to the east, near the coast of Brazil. I have nothing in Greenland, but the film does. In Africa, the “Sierra-Leone” location is close to my Tassili in the Sahara Desert. The “Pakistan” area is not far from my location at New Delhi and my Russian location appears to be indicated with “Siberia.” The film’s “Black Sea” area is off from the 12 sub-stations, but my Yonaguni is indicated just south of Japan. They have one in Australia and so do I. Also, they have one for China and mine omits China [because this was a later Atlantean Grid and not the older (Asian) Lemurian Grid in the Pacific Ocean].

Could be a coincidence that the areas parallel. Then again, it makes more sense that the movie’s 12 locations of encounters were referenced or taken from an understanding of ancient Ley Lines. Maybe the 12 landing spots were a conglomerate of known Grid Points and Ley Lines, while not indicating obvious ones like the Great Pyramid and Easter Island? Wait until the plot is revealed and we’ll see if there are connections to the ancients and are those areas special as far as the story is concerned? Why land and make contact at those particular places?
On the very small chance that MY Grid was the basis for the movie’s encounter-locations, one thing I know for sure:
I won’t see a dime!

A few other examples of World Energy Grid Ley Lines: 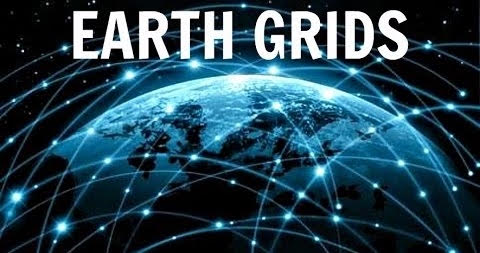 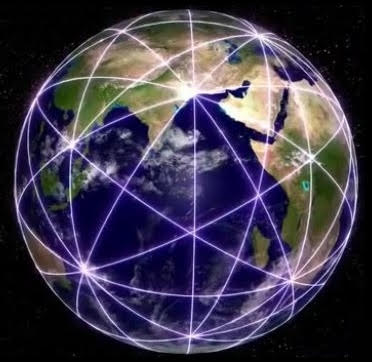 Have MIND,
Will travel

– Answers from a different POV –

How to order novels by TS Caladan