Wind farms in Pacific Northwest paid to not produce

March 7, 2012
Taxpayers have put out billions in subsidies over the last three years for Barack Obama’s green-energy stimulus program, which has produced such success stories as Solyndra, Beacon Power, and Ener1.  But what happens when taxpayers subsidize efforts that actually produce electricity?  As people in the Pacific Northwest have discovered, they end up subsidizing green-power generation – and non-generation:

Wind farms in the Pacific Northwest — built with government subsidies and maintained with tax credits for every megawatt produced — are now getting paid to shut down as the federal agency charged with managing the region’s electricity grid says there’s an oversupply of renewable power at certain times of the year.
The problem arose during the late spring and early summer last year. Rapid snow melt filled the Columbia River Basin. The water rushed through the 31 dams run by the Bonneville Power Administration, a federal agency based in Portland, Ore., allowing for peak hydropower generation. At the very same time, the wind howled, leading to maximum wind power production.
Demand could not keep up with supply, so BPA shut down the wind farms for nearly 200 hours over 38 days.
Of course, after BPA shut down the wind farms, they could not collect any revenue for the lost output.  Guess who gets to pay for the losses?  Hint: It’s the same people who pay extra for the privilege of having wind farms on their grid in the first place:
Now, Bonneville is offering to compensate wind companies for half their lost revenue. The bill could reach up to $50 million a year.
The extra payout means energy users will eventually have to pay more.
“We require taxpayers to subsidize the production of renewable energy, and now we want ratepayers to pay renewable energy companies when they lose money?” asked Todd Myers, director of the Center for the Environment of the Washington Policy Center and author of “Eco-Fads: How the Rise of Trendy Environmentalism is Harming the Environment.”
Enviros don’t like this solution, either, because they understand how angry it will make consumers in the area.  Whose fault is that?  BPA points right back to the enviros, claiming that they can’t shut down the hydroelectric generators because doing so will endanger a species of salmon in the area, thanks to overoxygenation of the water that increased dam releases can cause.

Traditionally-fueled generators don’t have these problems.  They can decrease or increase production as needed, thanks to not being held hostage to the whims of nature and the demands of enviros.  Then again, they don’t get rewarded for non-production with taxpayer subsidies like their renewable counterparts, either.  At times, they must feel like they’re in the wrong business … even though they’re the ones doing it right.

One of the beauties of our educational system in England is that State Schools are free, and furthermore they are compulsory. Compulsorily free!

Hold on a minute. It is true that unlike fee-paying Preparatory and Public Schools one does not have to pay a whacking great fee.  That is true. On the other hand how do you imagine that all the staff at all these huge State Schools get paid? The answer is simple. We all pay, we all pay for our supposed ‘free’ education through taxation – every man-jack of us, who pay taxes.

Now the poor blighters who send their sons and their daughters, to such places as Eton and Harrow, to Sherborne and Marlborough, to Bryanston and Clayesmore, – the last named possibly being the best of the bunch! – actually are paying twice. They pay for a State School education whether they like it or not, and they also pay a whacking great fee in the order of thousands of £s per term. In reality they should get a rebate, but keep Mum or else the Treasury will bust a gut.

Now you would think that if the Government has seen fit to provide ‘free’ schooling, whether it is spurned or not, then surely the logical outcome would be to provide free higher education at Universities, or free training for those without an academic bent.

Yet this is precisely what is not happening. The whole business has become impossibly expensive with University fees so punitive that any who undertake their courses are likely to be saddled with debt until Kingdom come. Supposedly, armed with a degree, they will immediately have the entrée to jobs so highly paid that a debt of say £20,000 to £40,000 could be paid off within a few years.

So the question is this: Why cannot the government spread the taxation around in such a way that all those who qualify can get their education for free. It seems logical, doesn’t it? Well, yes, it does. And in Scotland they have decided to give it a go. 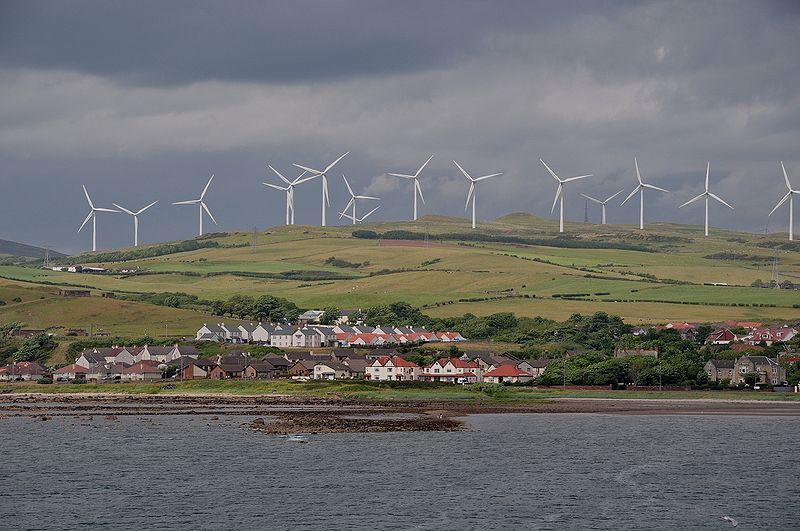 The skyline of Ardrossan, North Ayrshire, Scotland, is dominated by an enormous wind farm. The houses in front are on Eglinton Road.

Unfortunately the Minister there is short on Maths. He seems unable to add up. He is all for populating his bonny Scotland with windmills of shame, which do not produce electricity on tap, but also on every turbine a huge subsidy is paid to the landowner. So much good money is thrown after bad, that there is nothing much left for Higher Education, and the Scottish Treasury is likely to go bust.

An investigation by The Sunday Telegraph reveals developers are exploiting a green energy subsidy, worth billions of pounds, to persuade landowners to turn their fields over for wind farms.

The speculators – who have been compared to door-to-door double-glazing salesmen – are ‘cold calling’ farmers with offers often too tempting to refuse.

One farmer in Northumberland has reported receiving 12 separate offers from developers to build turbines on his land.

The potential profits for the energy companies are even greater.

One turbine can generate more than £13 million over the course of its 20-year lifespan, around half of it from the sale of the electricity it generates, and the other half through a consumer subsidy added on to electricity bills.

When we hear the words ‘Government subsidies’ we are inclined to switch off. But let us be absolutely clear what is meant. If Robert Mendick is correct in his information it means that we, the paying public, are paying out of our taxes to support a farmer with one single turbine to the tune of £60,000 a year. How many turbines are already erected? How much electricity are they producing? Can these Wind Farms ever produce the ‘base load’, that is the electricity that we expect at the flick of a switch? The answer is so obviously No! Wind is totally unreliable.

Now let us return to Higher Education. How many scholarships could be provided to qualified students out of the subsidies that are being offered to land owners to have turbines erected on their land? I reckon on these figures that each turbine’s subsidy could provide for some 6 students. How many turbines are there? And how many more are planned?

How mad can we be? How much longer are we to be conned by the stupidity and cupidity of these avaricious men?