“For the wise man looks into space and he knows there is no limited dimensions.”

— Lao Tzu. Chinese Taoist Philosopher, founder of Taoism,
writer of Tao Te Ching or The Book of the Way. 600-531 B.C. 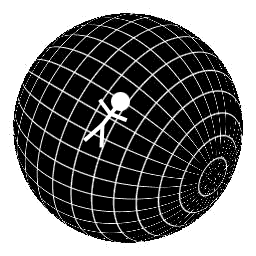 Imagine now that we are still two-dimensional creatures but that we don’t live on Flatland. We live on the surface of a sphere, Sphereland.

Again, we have no knowledge of the third dimension but are only aware of the surface of our sphere. As we move along this surface, what is the shortest distance between two points?

In Flatland it is a straight line.  In Sphereland it also appears to be a line, however in 3-D reality it is a segment of a circle.

This simplified model can help us to imagine our Universe as a “sphere” expanding in (at least) 4-D physical space (plus Time as the 5th dimension). 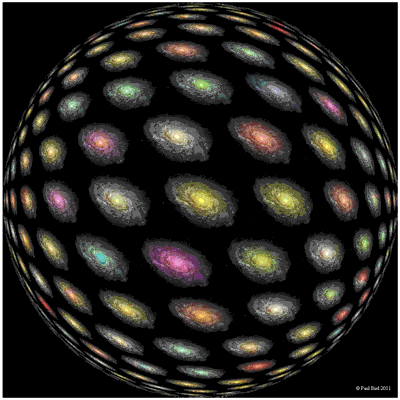 Universe in an expanding sphere. The galaxies furthest away are moving fastest and hence experience length contraction and so become smaller to an observer in the centre. Image curtesy of Wikipedia.

In Chapter 10 of Cosmos, Carl Sagan uses a wonderful, simple story to explain how creatures in higher dimensions might be perceived by creatures in lower dimensions. To paraphrase his story… A multitude of shapes live in a two-dimensional world called Flatland in which everyone has only width and length but not height. In other words, they can move left and right and backward and forward, but not up and down. The shapes see each other as merely flat, line segments; the fact that a shape has an “inside” is unknown to them. One day, a three-dimensional apple hovers above Flatland and, in a gesture of interdimensional friendship, says “How are you?”to a flat square below. For its part, the perplexed square looks left and right, backward and forward and doesn’t see anything. What’s worse is that the voice, coming from above, seems to be emanating from the square’s own flat body, from within. Not getting a response, the apple decides to descend into Flatland. However, only a cross-section of a three-dimensional creature can be seen in Flatland; so, the now frightened square witnesses a point appearing out of nowhere that slowly grows to a circular slice. Still not getting a response, the frustrated apple bumps the square and sends him flying up into the air, into that mysterious third dimension of above. The square is utterly confused and doesn’t know where he is until he looks down and realizes that he is seeing Flatland from a new vantage point: up. Travelling into another dimension has allowed him to see into his flat friends; it’s given him X-ray vision. Eventually, the square falls back down into Flatland. To his friends, who are distressed that he suddenly disappeared and then reappeared out of nowhere, the square excitedly explains, “I was up.” His friends just pat him on his sides and think that delusions have always run in his family.

Similarly, we can imagine how surprised an ant would be to discover that giant creatures called humans share its miniature world. Or how a fish would have difficulty believing in and comprehending that a world of air exists outside its watery cosmos. Is it that difficult, then, to imagine the existence of higher dimensions, other worlds that envelope our own? Consequently, is it that difficult to imagine that creatures unknown to us might inhabit these higher dimensions? If such creatures exist, who are they? Where do they come from? How do they view us?

What if, like the square, we are sometimes provided with glimpses into other dimensions and temporarily exhibit a kind of X-ray vision into our own four-dimensional world? That might be one way to explain mystic/prophetic visions (e.g. Ezekiel) and psychic phenomena.

It seems that 86,400 somehow connects units of time, distance, and area.

If Time is considered linear and represented by a straight line of  180 deg, then it is easy to conjecture that infinity/eternity can be identified by a circle .
A circle has no beginning and no ending. A circle can be divided ever smaller or larger depending on ones’ position, by “pi” for infinity/eternity.
Infinitely dividing the circle represents physical space and an eternity of time is needed to make the divisions.
Infinity/eternity can then be described by 360 deg.

The sum of the angles of a triangle is equal to straight angle (180 degrees).