In February 2016, the Advanced LIGO team announced that they had detected gravitational waves from a black hole merger.

Gravitational waves: Einstein was right – and this announcement is the scientific highlight of the decade

A century after Albert Einstein explained his General Theory of Relativity, scientists are expected to announce that they have found gravitational waves – ripples created by the collisions of black holes.

On Thursday, experimenters will report the first detection of a phenomenon that has been long predicted: bursts of gravitational waves generated by cosmic collisions of black holes. 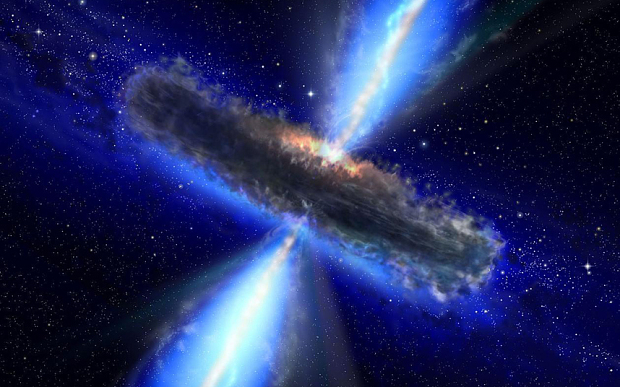 This image shows an artist’s concept illustrating a quasar, or feeding black hole. Scientists are set to make a major announcement February 10, 2016 on efforts to pinpoint the existence of gravitational waves, or ripples of space and time that transport energy across the universe. The waves themselves have never before been directly measured, though Albert Einstein said a century ago they were out there, according to his theory of general relativity. They are believed to form around massive objects like black holes and neutron stars, warping space and time.  AFP / NASA / Handout / RESTRICTED TO EDITORIAL USE – MANDATORY CREDIT “AFP PHOTO / NASA/ESA”/AFP/Getty Images

Sadly it is not unknown for hyped-up scientific claims to be mistaken or exaggerated – claims of particles going faster than light, gravitational waves from the big bang, and so forth. I count myself a hard-to-convince sceptic. But what is being claimed will be the culmination of literally decades of effort by scientists and engineers with high credentials, and this time I expect to be fully convinced.

This theory tells us that the force of gravity is best understood as a “warping” of space itself. And when gravitating objects move, they generate a “ripple” in space itself.

When such a ripple passes the Earth, our local space is alternately stretched and compressed, rather as, when a stone is thrown into a pond, the induced outward-moving wave causes the water at any point to cyclically rise and fall – but by a tiny amount.

In the LIGO detectors (the acronym stands for Laser Interferometer Gravitational-wave Observatory) intense laser beams are projected along 4-kilometre long tubes, from which air has been evacuated. 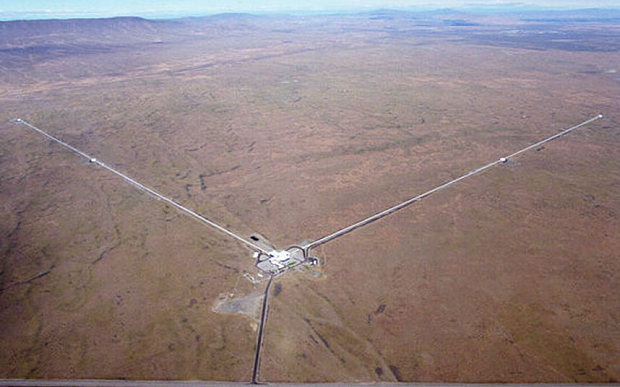 The 4km-long arms of the LIGO Hanford Observatory in Washington state, USA. With its sister facility across the country in Louisiana, it is built to detect gravitational waves  Photo: NASA

This is an immensely delicate experiment: the effect being sought is so tiny that it “shakes” the mirrors through a distance less than a millionth of the size of a single atom. This is why it’s been crucial to have two similar detectors separated by nearly 2,000 miles – one in Washington State, the other in Louisiana – and to seek events that show up in both detectors, thereby ruling out effects caused by local seismic events, passing trucks, and so forth.

Peter Higgs predicted his particle 50 years ago, but its detection – and pinning down of its properties – had to await the march of technology. It required a huge machine, the Large Hadron Collider in Geneva.

Gravitational waves were predicted even earlier, but detection has been delayed because the quest involves detecting a very elusive effect and again requires large-scale and expensive instruments – a challenge to the many hundreds of engineers and scientists involved in this international collaboration.

Why is the effect so small and elusive? It’s basically because gravity is such a weak force. We only feel its attraction because we are on planet Earth.

The gravitational pull between everyday objects is tiny. If you wave around two dumbbells you will emit gravitational waves – but with quite infinitesimal power. Even planets orbiting stars, or pairs of stars orbiting each other, don’t emit at a detectable level.

This detection is indeed a big deal: one of the great discoveries of the decade – up there with the detection of the Higgs particle, which caused huge razzmatazz two years ago.

The Higgs particle was a capstone to the so-called standard model of particle physics, developed over several decades. Likewise, gravitational waves – vibrations in the fabric of space itself – are a crucial and distinctive consequence of Einstein’s theory of general relativity.

Prior to the direct detection of gravitational waves, there was indirect evidence for their existence. For example, measurements of the Hulse–Taylor binary system suggest that gravitational waves are more than a hypothetical concept. Potential sources of detectable gravitational waves include binary star systems composed of white dwarfs, neutron stars, and black holes. As of 2016, various gravitational-wave detectors are under construction or in operation, such as Advanced LIGO which began observations in September 2015.

Astronomers are agreed that the only sources that LIGO might detect must involve much stronger gravity than in ordinary stars and planets. Objects where gravity is strongest and fastest-changing are the most powerful emitters of gravitational waves. The best bet is that the events involve black holes.

We’ve known for about 40 years that black holes exist: most are the remnants of stars twenty or more times more massive than the sun. These stars burn brightly, and in their explosive death-throes (signalled by a supernova), their inner part collapses to a black hole.

The material that the star was made of gets cut off from the rest of the universe, leaving a gravitational imprint on the space it has left.

The violent birth of a black hole generates a pulse of gravitational waves. But an even stronger pulse comes if two holes subsequently coalesce.

This is a rare event, happening less than once in a million years in our Galaxy. But such an event would give a LIGO signal even if it happened a billion light-years away – and there are millions of galaxies closer than that.

For years, LIGO detected nothing. But it went through an upgrade, coming fully on line again a few months ago. Luckily, it has now proved sensitive enough to detect pulses of gravitational waves.