The whole thing is so absurd that one wonders, ‘Has the whole world gone mad?’ The whole temperature thing is a mess. Why is Dr Vicky Pope awaiting for the October figures?  What good are these famous average figures? I mean, if the figures were not corrupted, as they undoubtedly are, if the figures were genuine, I ask you, what good is an average figure anyway?  So Timbuktu may be having a hot spell – will that cancel out the blizzards in Scotland?  Will some statistician at the CRU or GISS work out by means of some obscure average that the Globe is one tenth warmer this year than some other year in the last one hundred? Who cares? I’ll tell you who cares – those who are freezing to death, those who are having to pay through the nose for windmills of shame that do not work! Those are they that care, while corrupt politicians count the filthy lucre they have gained on investments in so called carbon free industries.

How many members of our Parliament have invested in the windmills of shame? How many will make a killing as more and more of these monsters ruin the environment., ruin our cliff tops, our seascapes and pillage our countryside,  in order not to produce the electricity that all our homes and industries need?  If these ugly monsters were efficient that might be another matter, but they are not. They use enormous quantities of cement, miles and miles of cabling, they gobble land 1,000 times faster than a normal Power Station – and then they don’t work!  They only work when the wind blows strong enough and not too strong. 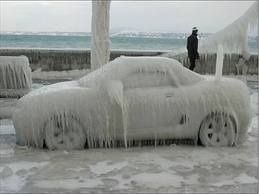 So we are to be persuaded to buy electric cars, which are equally useless. Who wants a car that has to be charged up overnight after a measly 70 miles?  And then there is the sheer hypocrisy of it all.  Somewhere out of sight, and out of mind, that electricity has to be generated. What price then if one had to wait till the wind did blow! The fact is that we all need power on tap – The Greens and the Luddites also need this power, and woe betide them when they find they have cut themselves off at the ankles, with no more laptops, no more twitter, no more conspiring against that wicked capitalist world, which has given them a standard of living undreamed of one hundred years ago.

Global Warming – The Greatest Hoax of All Time

How is it that a Conservative government could enter into a coalition with the Lib-Dems and then make someone as moon-struck as Chris Huhne, Minister for the Environment?  He leaves his wife to shack up with some lesbian bi-sexual, and we entrust him with perhaps the most momentous decisions any Minister of the Crown is called up on to make. What sort of judgment is that, Mr Cameron?

It is abundantly clear that the great British public have been had in the greatest hoax of all time. How many people squeak weakly that they must leave this complicated question to the experts!  That is like saying that you would leave all your worldly goods to the first confidence trickster that comes to your door.  And that confidence trickster has already visited and is stealing your birthright.

Wake up Britain! Wake up world, before these monsters of greed and ignorance throttle the very life out of you.

PS. Herewith some science for the layman, which needs only simple mathematics. Both sides agree that the current level of atmospheric CO2 is less than 400 parts per million by volume. That is 0.04 of the atmosphere. So the total amount from all sources, from respiration, from the oceans, from vents and volcanoes, and from the combustion of fossil fuel is only 0.04 of the atmosphere. How much of that is the anthropogenic element? Less than 4%. So 4% of 0.04 = 0.0016%. Now suppose the powers that be manage to persuade every sovereign power to cut their emissions of CO2 by 20% by 2020, what effect will that have? Let us do the sum. 20% of 0.0016 = 0.00032. Can you imagine just how ridiculous that is!

Suppose my figure of 4% is wrong. The truth is that it is difficult to distinguish man-made from natural CO2 in the atmosphere, though attempts have been made with isotopes to label these molecules. Even then the most died in the wool alarmist will admit that CO2 from natural sources hugely overwhelms anything man-made. So same difference! Cutting carbon emissions is simply pouring from the empty into the void.

At enormous expense precisely nothing will have been achieved. In no way will Global temperatures have been altered, for the very simple reason that nobody knows exactly what regulates temperatures and where. The science is settled, they claim. What science?  The Alarmists themselves including our very own Met Office only claim that the warming is very likely man-made. Even the Fourth Assessment of the IPCC says ‘very likely’. Is ‘very likely’ science? Hardly! ‘Very likely’ is simply opinion, an opinion based on nothing very much. It is an opinion based on an unproven hypothesis that has not been tested, but which an anarchical group, bent on self-destruction, have run away with. It is not science; it is simply suggestion, a hypnotic suggestion over weak and gullible minds.

If Global Warming meant what it says, it would mean that the Globe is warming. Think about that for one moment. Is Farnborough warming? Is Jakarta warming? Is New York warming?  Clearly these scientists have something else in mind, but what exactly?

If the whole of the Globe was 15° centigrade, night and day, season in and season out, then one might be able to record a warming. But it is not like that, is it? Even the temperature of two airports as close as Heathrow and Gatwick show differences, and differences night and day.

So perhaps the warmest year means that each separate unit is warmer than the average for that unit. My unit is Farnborough in Hampshire, UK. So I have recourse to the Weather Channel, which I have on my desktop. What do I find?  I find that the average high for today is 8°, while the fact is that it is 3°, which is some five degrees colder than average.  I knew it – we are cooling!

Even with all the boffins at CRU and GISS I cannot imagine they are working out the averages for every area and then computing an average rise or fall. But then, what the hell are they doing?

Until we have some clarity of thought on this issue the whole thing is a nonsense. The science is settled! What science?