The Guide Stones are a monument the likes of which have not been erected the last 3500 years. Its significance lies not only in  the structure but also the texts and inscriptions on it.

In June 1979 a stranger came into town and he changed the Elberton landscape dramatically. He gave an order for a very special monument vastly different from anything ever produced in Elberton quarries. This stranger made clear from the beginning that the name of R.C. Christian he used was a pseudonym and demanded that his identity would never be revealed. This was unusual, but what he ordered was much more unusual.

R.C. Christian provided the plans for a monument, which was to be built in the style of megaliths used all over the planet until about 3500 years ago and the monument had to integrate several features as they were used in ancient civilizations for astronomic purposes. Additionally, he provided texts in several languages, which had to be carved into the granite slabs and an explanatory tablet, which was to be placed close to the monument.

March 1980 Construction  of the monument was finished and in a small ceremony it was shown  to the public. Right away it became the center of many controversies. Several are dealing with the monument itself. Other criticize the texts, which are engraved on the slabs in 8 languages. 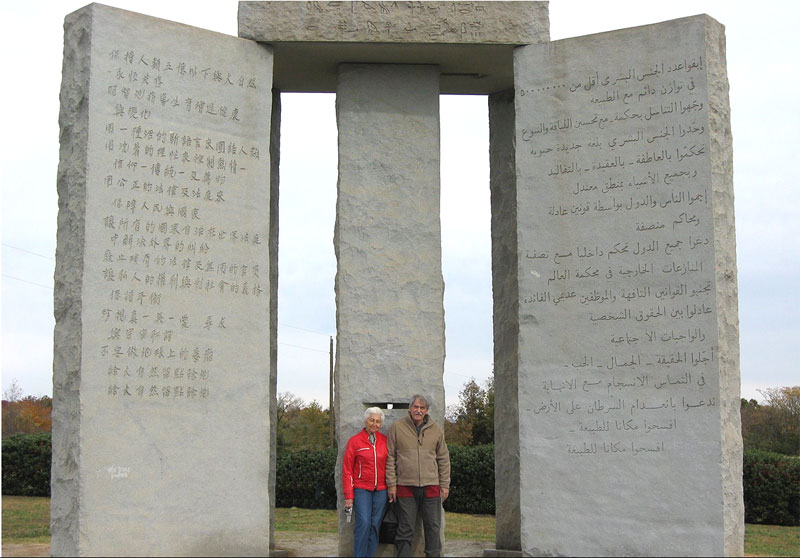 Additionally, there are inscriptions on the capstone in four ancient languages. All theories presented to date have not been able to provide any convincing argument as to the logical purpose of the monument. Here is my version:

First, let’s deal with the monument itself. As already mentioned, it is a reminder of many ancient structures still found all over the world. Most similar it is to the structures at Stonehenge and, therefore, it is also called “The American Stonehenge”. This comes close to the meaning of the Guide Stones, as they show several same or similar features as the original structure in England. These features comprise openings in the stones, which provide visual connections with several astronomical locations.

The 4 slabs are carved with a text in 8 living languages.

Between 4500 and 3500 years ago the Egyptian gods constructed a system consisting of more than 50,000 megaliths all over the Northern half of the planet. These megaliths were arranged according to the stars and star systems of the Northern night sky. The purpose of the megalithic system was to invoke the spiritual powers of the objects included in it. This seems literally far fetched but in the realm of spirituality also called the quantum vacuum by science there is neither space nor time. Everything is instant and present. Therefore, it is possible to use the spiritual power of objects no matter how far they are away, for instance, stars and star systems. Also, as there is no time in the spiritual realm it does not matter how old objects included in the megalithic system are.

Therefore, the texts engraved in the stones  comprise ten topics provide no directions for humans to obey or to follow, as they are meant to establish general spiritual patterns, which will determine the conditions of life in the new world to come.

The Solar System circles around the galaxy every 26,000 years. This is also a cycle for major extinctions. Commonly overlooked is the fact that there is another cycle of extinction at half time when the Earth is in opposition to the location of the 26,000 year position. We are reaching the 26,000 year position. 13,000 years ago there was the extinction of the animals of the Mega Fauna. This time around it is possible, maybe even probable, that a cosmic impact threatens the same fate for humanity. A chapter in my book God’s Plan for 2012 provides the reasons for this assumption. It is available at amazon Kindle and at Barnes & Noble Nook.  It also is available as e-book or on a CD at my web site richanders.com and at worldmysteries.com.

The topmost text on the slabs is the one, which caused many controversies:

Nearly  all commentators believe that this statement implies that six and a half billion humans should be murdered. This gruesome idea is not feasible. However, it is feasible that a major impact of a cosmic body, an asteroid or comet, can be labeled as an “extinction event”, which can destroy the lives of more than 6 billion people. This sentence makes not clear whether the intention is to repopulate this planet in a different world with a maximum of 500.000.000 humanoid people or whether the intention is to save the lives of up to 500 million humans in connection with the event of December 2012.

The other points in the texts are not controversial. They are:

Evidently, the above texts are not a version of the Ten Commandments issued by God to Moses. As mentioned above, they are much more.

The universe is a threefold structure: primarily it is a spiritual structure; secondly it is an electromagnetic structure. Lastly, there is the realm of matter and it follows the other two structures’ lead. Simply expressed: events respectively the situation in the realm of the spiritual structure determines what happens in the material realm.  For instance, if you decide to make a cup of coffee the mind issues the order to the body to make a cup of coffee following with further orders of the mind how to do it. This simple example illustrates the predominance of the spiritual energies over the electromagnetic and material realm.

A world functioning according to the programs expressed above seems to be an ideal, even utopian place. It definitely cannot originate from the present imperfect world and its harsh living conditions. Therefore, a change of worlds would have to  take place to implement the above mentioned conditions for life on this planet.

The Mayas early on had very much knowledge about cosmic cycles. They believe that every cycle, which they call a world, lasts for 5125 years. Each cycle ends in terrible cataclysms, which bring the end of the then existing world, which is followed by another, a new world. The Maya prophecies considered this present world to be the fifth one. It followed the previous world, which was destroyed by water 5124 years ago. According to the Maya it’s the turn of the present world to be destroyed by fire and the date is December 21st, 2012.

The ancient megaliths system was erected by the Egyptian gods, who like all the other gods, who lived in the world before disappeared 3500 years ago because of a change of worlds. The megalithic system failed to function as the Egyptian gods had programmed and the new, the present world is a world for humans only. It can be assumed that they, wherever they are, know about the coming cataclysm and intend to program the next world to come using the system of ancient megaliths and a structure, which fits right into this pre-existing system, the Georgia Guide Stones. If successful, the Egyptian gods would be the owners of the new world.

In view of the above it is clear that the ones in charge of the “guide stones project” are the Egyptian gods. Not only did they fit the Georgia Guide Stones into their existing megalithic system, it also means that there is someone who is able to use it. It can be safely assumed that the system as such will work only for a member of the clan of the Egyptian gods, one who is incarnated in this world.

The mysterious stranger who had this monument built made clear that he wished to stay anonymous and gave a name, which he openly declared as a pseudonym – R.C. Christian.

The Christian religion has the most followers of all religions. An end of the world scenario is one of the center pieces of every Christian’s beliefs. It is generally believed that Christ, the Savior, will return to this world before its end. The ten topics written in the stone slabs of the monument don’t provide any connection to Christian beliefs. This makes clear that a fake “Christian” is trying to give with the guide stones the impression that he is the Savior, who is expected by the Christian religion to come before the end of this world. He is attempting to integrate into his project the spiritual power of the biggest religion on Earth namely Christianity.

The truth will set you free and this applies in this case, as well. By exposing the spiritual background and purpose of the “Georgia Guide Stones” with this article the spiritual mechanisms the monument stands for have collapsed. The end of this world and the ensuing new world will be subjected to the spiritual patterns of the prevalent mass consciousness and this is Christianity.

Summing up: the mystery of the guide stones could be explained. The attempt to hide the ones who are in charge of the project regardless of where they are has failed because the type of construction of the monument clearly points to the Egyptian gods.

The guide stones did not reveal what the people of this world can and should do to be part of the project. In fact, one of the texts  declares that the people to live in  the new world shall be no more than 500.000.000. It does not make clear whether these 500.000.000 are to be survivors of the coming cataclysm or people already populating the new world to come.

R.C, Christian has  successfully hidden his identity behind a pseudonym. Regardless, it is clear that he is the front man of the Egyptian gods who try to utilize the impending cataclysm to repeat their attempt to get possession of the new world to come, Like 3500 years ago this won’t happen! 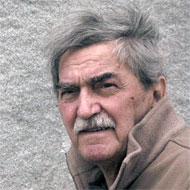 Rich Anders was born and raised in Austria. He attended Rollins College in Florida and graduated from the University of Vienna. Rich Anders spent 15 years in various executive positions. Then he visited the Virgin Islands and stayed. The Caribbean proved to be the right setting for writing this books.
The writing style employed by Anders embraces an eclectic spread of physical and spiritual principles, ultimately shedding an unforgettable viewpoint on the essence of God, the Devil, creation, and existence. His books are recommended reading for students of religion, spirituality, cosmology, and metaphysics. Rich Anders is available as speaker for religious congregations discussing the end of the world and salvation.Contact Rich Anders by e-mail richanders@msn.com or by phone 770-321-0483.

There is an Esoteric Agenda behind every facet of life that was once believed to be disconnected. There is an Elite faction guiding most every Political, Economic, Social, Corporate, some Non-Governmental or even Anti-Establishment Organizations. This film uses the hard work and research of professionals in every field helping to expose this agenda put the future of this planet back into the hands of the people.  This is arguably one of the most inspiring videos you’ll ever see!

The Internet’s largest Esoteric, Spiritual and Metaphysical Database! UPDATED DAILY! http://www.in5d.com/
The DVD is available on this website at http://talismanicidols.org/ or http://esotericagenda.net/
For more on spirituality, metaphysics and 2012, please visit http://www.maya12-21-2012.com/ and http://www.in5d.com/