A team of scientists claims to have found the first-ever definitive evidence of a comet striking Earth.
After conducting a series of analyses, the researchers determined that a mysterious black pebble discovered years ago in the Egyptian desert is a piece of a comet nucleus — the first ever discovered. 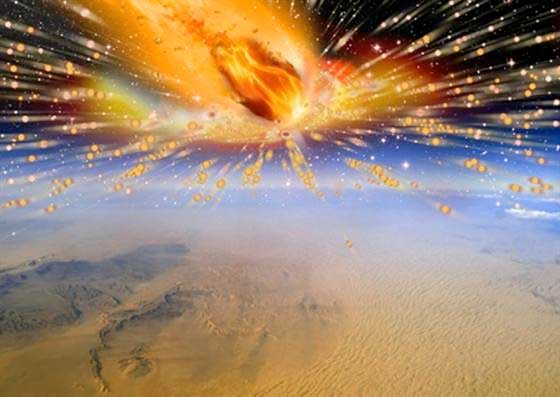 An artist’s rendition of the comet exploding in Earth’s atmosphere above Egypt 28 million years ago.  Copyright by Terry Bakker

“It’s a typical scientific euphoria when you eliminate all other options and come to the realization of what it must be,” study lead author Jan Kramers of the University of Johannesburg in South Africa said in a statement. [Best Close Encounters of the Comet Kind]

The pebble, which the team has named “Hypatia” in honor of the ancient female mathematician, astronomer and philosopher Hypatia of Alexandria, is also studded with diamonds, which makes sense considering its cometary origin, researchers said.

“Diamonds are produced from carbon-bearing material,” Kramers said. “Normally they form deep in the Earth, where the pressure is high, but you can also generate very high pressure with shock. Part of the comet impacted, and the shock of the impact produced the diamonds.” 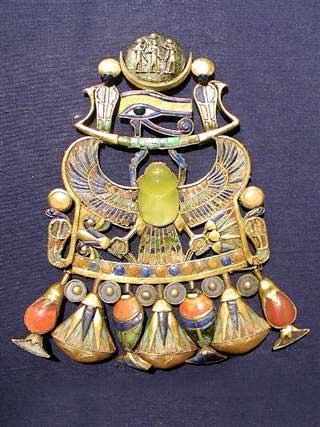 This image shows Tutankhamun’s brooch, which celebrates the ancient Egyptian pharaoh with a dazzling scarab made of yellow silica glass, which scientists say was likely formed from a comet impact millions of years ago. University of the Witswatersrand

This impact occurred about 28 million years ago over Egypt, study team members say. The comet exploded in the atmosphere, heating the sand below to a temperature of 3,630 degrees Fahrenheit (2,000 degrees Celsius) and generating huge amounts of yellow silica glass across 2,317 square miles (6,000 square kilometers) of the Sahara Desert.

One piece of this silica glass even found its way into a brooch that belonged to the famous Egyptian pharaoh Tutankhamen, researchers said.

Comets have almost certainly struck the Earth many times over the planet’s long history. But before the Hypatia pebble’s origin was determined, tiny dust particles in the upper atmosphere and carbon-rich dust in Antarctic ice were the only cometary material known on Earth, researchers said.

Comets are leftover pieces from the formation of the solar system 4.5 billion years ago, so the new discovery could have valuable scientific applications as well as gee-whiz appeal.

The study will be published in an upcoming issue of Earth and Planetary Science Letters. Three of the co-authors will also discuss the finding Thursday during a public lecture at the University of the Witswatersrand in Johannesburg.