Physicists at the lab near Geneva say they’ve observed subatomic particles moving faster than the speed of light. If confirmed, it would defy Einstein — and upend our understanding of physics.

Albert Einstein had the idea. A century of observations have backed it up. It’s one of the cornerstones of physics: Nothing travels faster than the speed of light.

But now a team of experimental physicists at the European Organization for Nuclear Research, known as CERN, says that one exotic particle possibly can.

The scientists reached their conclusion after sending streams of tiny, subatomic particles called neutrinos hurtling from an accelerator at CERN outside Geneva to a detector at the Gran Sasso National Laboratory in Italy, about 450 miles away.

The neutrinos seemed to get there too soon — 60 nanoseconds too soon, give or take — than they should if they’d been traveling at the speed of light.

That slight edge, if it holds up under scrutiny, has enormous implications for our understanding of the laws of nature, physicists said.

“Basically, all of special relativity would be wrong,” said Drexel University physics professor Dave Goldberg, referring to Einstein’s 1905 theory establishing that light travels at a constant speed, regardless of how fast an observer is traveling, and that nothing in the universe can go faster than it.

“If you have particles traveling faster than the speed of light, you can in principle go back in time. So you can be your own grandmother. As you can imagine, that causes some problems,” said Stephen Parke, a theoretical particle physicist at Fermilab in Batavia, Ill.

The operative word is “if.”

“I’m fairly skeptical. I expect most people are,” Goldberg said.

The physicists responsible for the work said they’d checked their findings stringently.

“We wanted to find all possible explanations for this. We wanted to find a mistake, but we didn’t,” said physicist Antonio Ereditato, spokesman for the so-called OPERA experiment, in an interview with the BBC on Thursday.

Because it was such “a crazy result,” the team was releasing its data, based on three years of measurements, so that others in the scientific community could confirm or refute the findings, he added.

The researchers posted the paper online Thursday evening and planned a seminar at CERN to discuss the findings Friday.

But even before the paper was available, scientists with the capability to generate and measure the speed of neutrinos were gearing up to try to duplicate the results.

“As you can imagine, something like this is so revolutionary that everyone who can weigh in will be attempting to do so,” said particle physicist Rob Plunkett, co-spokesperson for the MINOS experiment at Fermilab.

In 2007, MINOS scientists also clocked neutrinos apparently moving faster than the speed of light, but the margin of error for that experiment was far greater than what was reported at CERN.

“It was not enough to make a scientific claim,” Plunkett said.

MINOS scientists may perform experiments of their own in as soon as six months, said particle physicist and MINOS co-spokesperson Jenny Thomas.

Noodling the ramifications — should the findings be confirmed — gave physicists pause. There are just too many things in nature that special relativity explains.

“What does it mean? I don’t know,” Goldberg said. “The list of things we believe we understand still have to be true. You’d have to have another theory that makes them all work, but also accounts for this.”

Parke, a fellow skeptic, said the findings could be explained without tossing out special relativity. For one thing, he said, it’s possible the neutrinos’ passage hadn’t been timed accurately.

Or maybe the neutrinos were traveling through different dimensions, taking shortcuts from Geneva to Gran Sasso.

“The jury’s still out,” Plunkett said. “It’s revolutionary in principle. One has to approach it with healthy skepticism.” 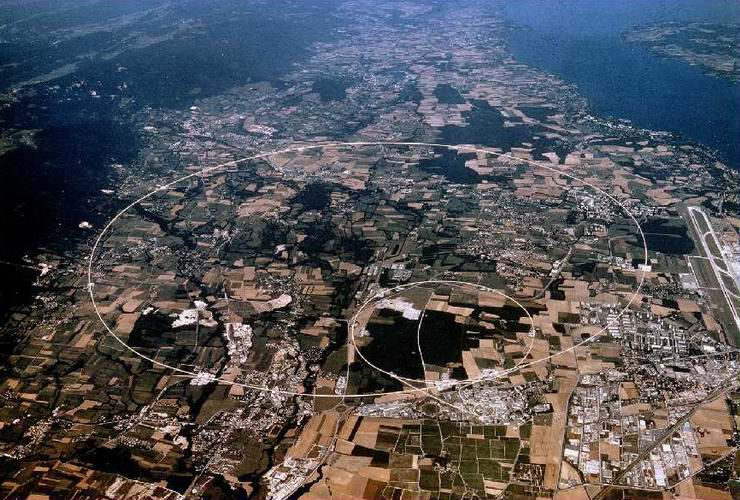 The Large Hadron Collider (LHC) is the world’s largest and highest-energy particle accelerator. It is expected to address some of the most fundamental questions of physics, advancing the understanding of the deepest laws of nature. The LHC lies in a tunnel 27 kilometres (17 mi) in circumference, as deep as 175 metres (574 ft) beneath the Franco-Swiss border near Geneva, Switzerland.

This synchrotron is designed to collide opposing particle beams of either protons at an energy of 7 teraelectronvolts (7 TeV or 1.12 microjoules) per particle, or lead nuclei at an energy of 574 TeV (92.0 µJ) per nucleus. The term hadron refers to particles composed of quarks.
The Large Hadron Collider was built by the European Organization for Nuclear Research (CERN) with the intention of testing various predictions of high-energy physics, including testing for the existence of the hypothesized Higgs boson and of the large family of new particles predicted by supersymmetry. It was built in collaboration with over 10,000 scientists and engineers from over 100 countries, as well as hundreds of universities and laboratories.  [ Note: Perhaps this is the best modern example of the Tower of Babel??? ]

Our understanding of the Universe is about to change…

The Large Hadron Collider (LHC) is a gigantic scientific instrument near Geneva, where it spans the border between Switzerland and France about 100 m underground. It is a particle accelerator used by physicists to study the smallest known particles – the fundamental building blocks of all things. It will revolutionise our understanding, from the minuscule world deep within atoms to the vastness of the Universe. 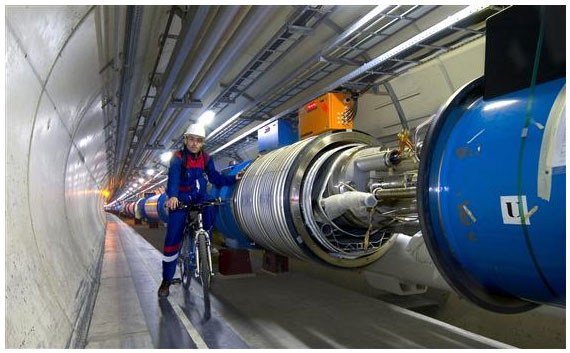 In order for technicians to get around the 27-km tunnel that houses the LHC various methods of transportation must be employed. © 2005 CERN 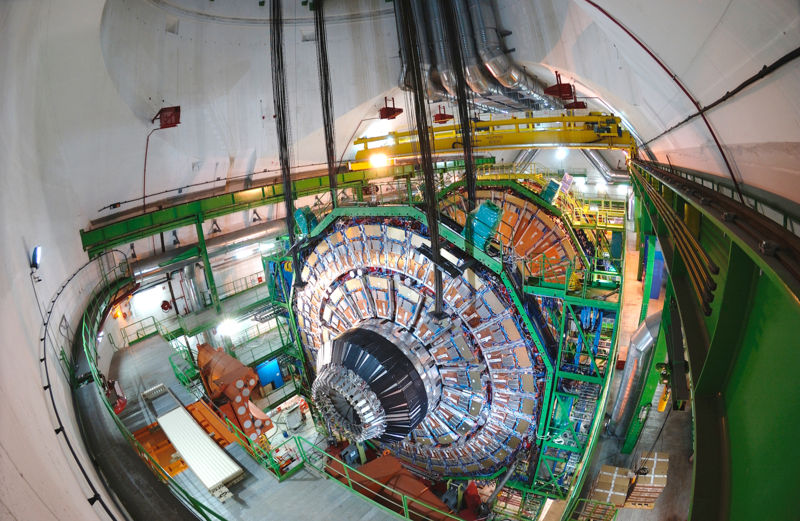 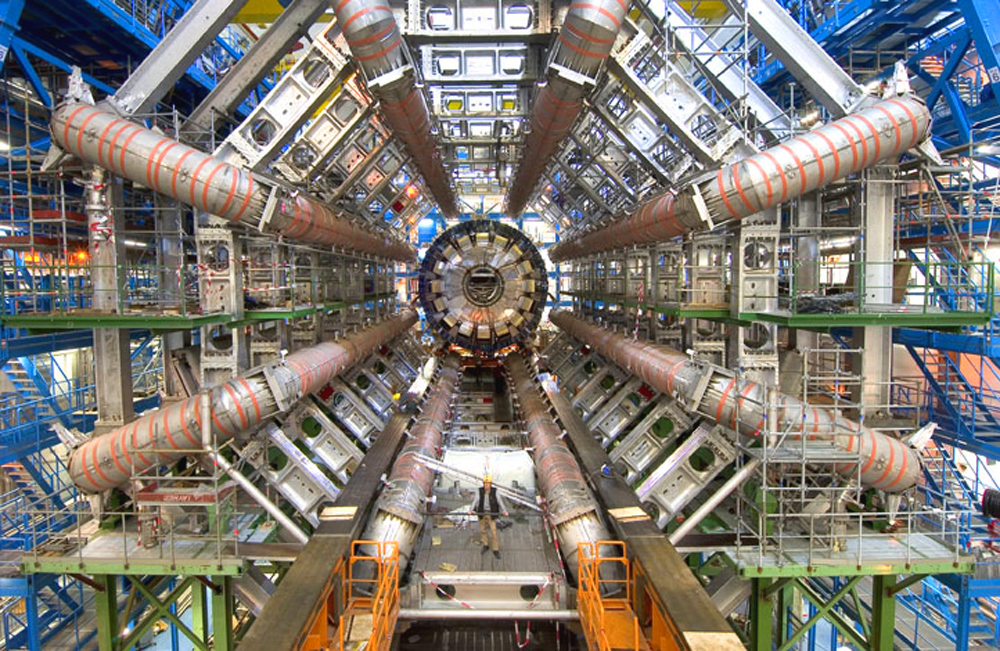 Two beams of subatomic particles called ‘hadrons’ – either protons or lead ions – will travel in opposite directions inside the circular accelerator, gaining energy with every lap. Physicists will use the LHC to recreate the conditions just after the Big Bang, by colliding the two beams head-on at very high energy. Teams of physicists from around the world will analyse the particles created in the collisions using special detectors in a number of experiments dedicated to the LHC.