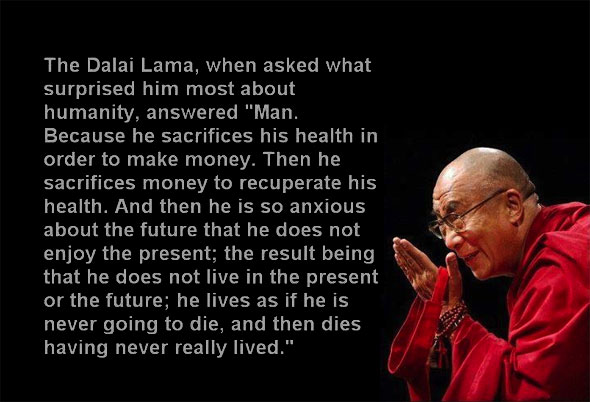 The Dalai Lama, when asked what surprised him most about humanity, answered “Man…. Because he sacrifices his health in order to make money. Then he sacrifices money to recuperate his health. And then he is so anxious about the future that he does not enjoy the present; the result being that he does not live in the present or the future; he lives as if he is never going to die, and then dies having never really lived.”

“I did not begin when I was born, nor when I was conceived. I have been growing, developing, through incalculable myriads of millenniums. All my previous selves have their voices, echoes, promptings in me. Oh, incalculable times again shall I be born.”

“I have been born more times than anybody except Krishna.”

Funny line but the jokes on him. Krishna ascended long ago. Mr. Clemens has reincarnated far more times than Krishna. Editor Reverse Spins.

[One] time he was asked if he believed in an afterlife. After a moment’s hesitation he said no, that he thought there was only “some kind of velvety cool blackness,” adding then: “Of course, I admit I may be wrong. It is conceivable that I might well be reborn as a Chinese coolie. In such case I should lodge a protest.”

“As long as you are not aware of the continual law of Die and Be Again, you are merely a vague guest on a dark Earth.”

“The Celts were fearless warriors because “they wish to inculcate this as one of their leading tenets, that souls do not become extinct, but pass after death from one body to another…”

“Live so that thou mayest desire to live again – that is thy duty – for in any case thou wilt live again!”

“The virtues we acquire, which develop slowly within us, are the invisible links that bind each one of our existences to the others – existences which the spirit alone remembers, for Matter has no memory for spiritual things.”

“The soul comes from without into the human body, as into a temporary abode, and it goes out of it anew it passes into other habitations, for the soul is immortal.” “It is the secret of the world that all things subsist and do not die, but only retire a little from sight and afterwards return again. Nothing is dead; men feign themselves dead, and endure mock funerals… and there they stand looking out of the window, sound and well, in some strange new disguise.”

“Though I may not be a king in my future life, so much the better: I shall nevertheless live an active life and, on top of it, earn less ingratitude.”

“I look upon death to be as necessary to the constitution as sleep. We shall rise refreshed in the morning.”

“He saw all these forms and faces in a thousand relationships become newly born. Each one was mortal, a passionate, painful example of all that is transitory. Yet none of them died, they only changed, were always reborn, continually had a new face: only time stood between one face and another.”

“I know I am deathless. No doubt I have died myself ten thousand times before. I laugh at what you call dissolution, and I know the amplitude of time.”

“No honest theologian therefore can deny that his acceptance of Jesus as Christ logically binds every Christian to a belief in reincarnation – in Elias case (who was later John the Baptist) at least.”

“There is no death. How can there be death if everything is part of the Godhead? The soul never dies and the body is never really alive.”

Isaac Bashevis Singer, Stories from Behind the Stove

“So as through a glass and darkly, the age long strife I see, Where I fought in many guises, many names, but always me.”

“Reincarnation contains a most comforting explanation of reality by means of which Indian thought surmounts difficulties which baffle the thinkers of Europe.”

“Our birth is but a sleep and a forgetting; The Soul that rises with us, our life’s Star, Hath had elsewhere its setting. And cometh from afar.”

“My life often seemed to me like a story that has no beginning and no end. I had the feeling that I was an historical fragment, an excerpt for which the preceding and succeeding text was missing. I could well imagine that I might have lived in former centuries and there encountered questions I was not yet able to answer; that I had been born again because I had not fulfilled the task given to me.”

“Why should we be startled by death? Life is a constant putting off of the mortal coil – coat, cuticle, flesh and bones, all old clothes.”

“I am confident that there truly is such a thing as living again, that the living spring from the dead, and that the souls of the dead are in existence.”

“Learn thou! the Life is, spreading life through all; It cannot anywhere, by any means, Be anywise diminished, stayed, or changed. But for these fleeting frames which it informs with spirit deathless, endless, infinite, They perish. Let them perish, Prince! and fight! He who shall say, “Lo! I have slain a man!” He who shall think, “Lo! I am slain!” Those both know naught! Life cannot slay. Life is not slain!”

“Impenetrable, unentered, unassailed, unharmed, untouched, immortal, all-arriving, stable, sure, invisible, ineffable, by word and thought uncompassed, ever all itself, Thus is the Soul declared! How wilt thou, then,- Knowing it so,- grieve when thou shouldst not grieve? How, if thou hearest that the man new-dead is, like the man new-born, still living man- One same, existent Spirit- wilt thou weep? The end of birth is death; the end of death is birth: this is ordained! and mournest thou, Chief of the stalwart arm! for what befalls which could not otherwise befall… What is there sorrowful herein, dear Prince?”

It is not more surprising to be born twice than once; everything in nature is resurrection.”

“That which is part of our souls is eternal. . . Those lives are countless, but the soul or spirit that animates us throughout these myriads of existences is the same; and though “the book and volume” of the physical brain may forget events within the scope of one terrestrial life, the bulk of collective recollections can never desert the divine soul within us. Its whispers may be too soft, the sound of its words too far off the plane perceived by our physical senses; yet the shadow of events that were, just as much as the shadow of the events that are to come, is within its perceptive powers, and is ever present before its mind’s eye.”

“It can be shown that an incorporeal and reasonable being has life in itself independently of the body… then it is beyond a doubt bodies are only of secondary importance and arise from time to time to meet the varying conditions of reasonable creatures. Those who require bodies are clothed with them, and contrariwise, when fallen souls have lifted themselves up to better things their bodies are once more annihilated. They are ever vanishing and ever reappearing.”

“God generates beings, and sends them back over and over again, till they return to Him.”

“All pure and holy spirits live on in heavenly places, and in course of time they are again sent down to inhabit righteous bodies.”

Josephus (Jewish historian who lived around the time of Jesus)

“And his disciples asked him, saying, Master, who did sin, this man, or his parents, that he was born blind?”

The Disciples of Jesus, John 9:2

They were among the most knowledgeable men of Christian doctrine in history because they got it straight from the Master; and yet these learned men asked if the man was born blind because of a previous sin. Editor, Reverse Spins

“`But I tell you, Elijah has already come, and they did not recognize him, but have done to him everything they wished. In the same way the Son of Man is going to suffer at their hands.’ Then the disciples understood that he was talking to them about John the Baptist.”

“Souls are poured from one into another of different kinds of bodies of the world.”

The above article is
Copyright © by William House, Editor, Reverse Spins
Reprinted with permission.

If we could reduce the population of the Earth (currently over 7,000,000,000 people) to only 100 individuals while keeping the existing proportion of distribution of all the existing nations this would be the breakdown:

When you look at the world from this perspective, the need for ACCEPTANCE, FORGIVENESS, and UNDERSTANDING is more that obvious.

Try to keep in mind the following:

Live as if Heaven is on Earth. And when you read this know that somebody is thinking of you and that you are not alone.

His Holiness the Dalai Lama’s inaugural address at the Hindustan Times Leadership Summit in New Delhi, India, on November 19th, 2010. There is also a short question and answer session after His Holiness’s address. (www.dalailama.com)

The classic and one book to get full of reincarnation quotes: