The extreme weather events of 535–536 were the most severe and protracted short-term episodes of cooling in the Northern Hemisphere in the last 2,000 years.

The event is thought to have been caused by an extensive atmospheric dust veil, possibly resulting from a large volcanic eruption in the tropics, or debris from space impacting the Earth.
Its effects were widespread, causing unseasonal weather, crop failures, and famines worldwide.

The Roman historian Procopius recorded of 536, in his report on the wars with the Vandals, “during this year a most dread portent took place. For the sun gave forth its light without brightness…and it seemed exceedingly like the sun in eclipse, for the beams it shed were not clear.”

Further phenomena reported by a number of independent contemporary sources:

Subject Related Link: The Fall of the Mayan Civilization 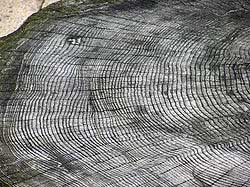 Tree ring analysis by dendrochronologist Mike Baillie, of the Queen’s University of Belfast, shows abnormally little growth in Irish oak in 536 and another sharp drop in 542, after a partial recovery. Similar patterns are recorded in tree rings from Sweden and Finland, in California’s Sierra Nevada and in rings from Chilean Fitzroya trees.

It has been conjectured that these changes were due to ashes or dust thrown into the air after the impact of a comet or meteorite, or after the eruption of a volcano (a phenomenon known as “volcanic winter”). The evidence of sulfate deposits in ice cores strongly supports the volcano hypothesis; the sulfate spike is even more intense than that which accompanied the lesser episode of climatic aberration in 1816, popularly known as the “Year Without a Summer“, which has been connected to the explosion of the volcano Mount Tambora in Sumbawa, Indonesia.

In 1984, R. B. Stothers postulated that this event might have been caused by the volcano Rabaul in what is now Papua New Guinea.

In 1999, David Keys in his book Catastrophe: A Quest for the Origins of the Modern World (supported by work of the American volcanologist Ken Wohletz), suggested that the Indonesian volcano Krakatoa exploded at the time and caused the changes. It is suggested that an eruption of Krakatoa attributed to the year 416 by the Javanese Book of Kings actually took place at this time–there is no other evidence of such an eruption in 416.

In 2009, Dallas Abbott of Columbia University’s Lamont–Doherty Earth Observatory in New York published evidence from Greenland ice cores that multiple comet impacts caused the haze. The spherules found in the ice may originate from terrestrial debris ejected into the atmosphere by an impact event.

In 2010, Robert Dull, John Southon and colleagues presented evidence suggesting a link between the Tierra Blanca Joven (TBJ) eruption of the Ilopango caldera in central El Salvador and the AD 536 event. Although earlier published radiocarbon evidence suggested a two-sigma age range of AD 408–536, which is consistent with the global climate downturn, the connection between AD 536 and Ilopango was not explicitly made until research on Central American Pacific margin marine sediment cores by Steffen Kutterolf and colleagues showed that the phreatoplinian TBJ eruption was much larger than previously thought. The radioactive carbon-14 in successive growth increments of a single tree that had been killed by a TBJ pyroclastic flow was measured in detail using Accelerator mass spectrometry; the results supported the date of AD 535 as the year in which the tree died. A conservative bulk tephra volume for the TBJ event of ~84 km was calculated, indicating a large Volcanic Explosivity Index 6+ event and a magnitude of 6.9. The results suggest that the Ilopango TBJ eruption size, latitude and age are consistent with the ice core sulphate records of Larsen et al. 2008.

The 536 event and ensuing famine have been suggested as an explanation for the sacrifice, by depositing hoards of large amounts of gold by Scandinavian elites at the end of the Migration Period, possibly to appease the angry gods and get the sunlight back.

The decline of Teotihuacán, a huge city in Mesoamerica, is also correlated with the droughts related to the climate changes, with signs of civil unrest and famines.

David Keys’ book speculates that the climate changes may have contributed to various developments, such as

In 2000, a 3BM Television production (for WNET and Channel Four) capitalized upon Keys’ book. This documentary, under the name Catastrophe! How the World Changed, was broadcast in the US as part of PBS’s Secrets of the Dead series. However, Keys and Wohletz’ ideas are not widely accepted at this point. Reviewing Keys’ book, the British archaeologist Ken Dark commented that “much of the apparent evidence presented in the book is highly debatable, based on poor sources or simply incorrect” and that “Nonetheless, both the global scope and the emphasis on the 6th century AD as a time of wide-ranging change are commendable, and the book contains some fascinating and obscure information which will be new to many. However, it fails to demonstrate its central thesis and does not offer a convincing explanation for the many changes discussed.”