Extraterrestrial Soot Reveals The Demise of The Dinosaurs

by Alexander Popoff
Numerous scholarly articles have reported high contents of soot in the Cretaceous-Paleogene boundary layer. Asteroid theory says that, close to the impact site, wildfires were ignited by the impact fireball, whereas globally they were ignited by radiation from the reentry of hypervelocity ejecta.
One of the problems with the asteroid theory is that most of the soot in the boundary layer is specific, as if created by burning petrol or other carbohydrates, not by burning vegetation.
What was that mysterious material that burned and contributed to the large part of the soot that covered the entire surface of the Earth?
Some interpretations have suggested that the soot from carbohydrates came from the combustion of fossil fuels such as crude oil, coal, or oil shales near the Chicxulub impact site.
But the research of the noble gases in the fullerenes from boundary-clay samples confirmed that they are of extraterrestrial origin, not created by wildfires.
[ad name=”Google Adsense 468×60 Banner Blue”]
Cometary core and dust contain elemental carbon grains. Comets are black (black as soot), thanks to the abundance of carbon compounds.
Comets also contain large amounts of frozen liquids, gases, and organics, which burn like giant fuel bombs while entering Earth’s atmosphere, leaving behind huge quantities of extraterrestrial soot. Frozen gases and liquids like ammonia, methane, ethane, acetylene, methyl alcohol, better known as wood alcohol, and many other chemicals have been seen in varying abundance in comets.
There are significant amounts of frozen hydrocarbons in comets.
Comet Hyakutake, the brightest comet in 20 years, had a big surprise: 100 million tons of frozen ethane and methane.
Researchers discovered fullerenes in the boundary layer. Fullerenes are a third form of pure carbon besides diamond and graphite. Their molecules are composed entirely of carbon, in the form of a hollow sphere, ellipsoid, tube, and other shapes. Spherical fullerenes are also called buckyballs, and they resemble soccer balls.
Researchers demonstrated that fullerenes have the ability to capture noble gases (helium, neon, and argon) within their caged structures.
The isotopic compositions of noble gases in meteorites and cosmic dust are clearly distinct from those found on Earth.
Terrestrial helium is mostly helium-4; it contains only a small amount of helium-3. Extraterrestrial helium is mostly helium-3.
The research of the noble gases in the fullerenes from boundary clay samples confirmed that they are of extraterrestrial origin.
No gas, crude oil, or coals were burnt at the end of the Cretaceous. Most of the soot and carbon was delivered by a burning comet and cometary dust. In the boundary clay there is also some amount of soot from wildfires.
Earth was hit by a huge comet 66 million years ago; it killed off most of the species on our planet.
In an article published in Nature in 1989, Meixun Zhao and Jeffrey L. Bada reported that they had found isovaline and aminoisobutyric acid tens of centimeters below and above the Cretaceous-Paleogene (K-PG) boundary.
The asteroid and volcano theories, which are prevalent among scholars, are not viable because they can’t explain many specifics of the Cretaceous-Paleogene (K-Pg) boundary and the mass extinction.
They can’t explain the presence of extraterrestrial amino acids in the soils for tens of thousands of years before and after the catastrophe, the loss of part of Earth’s atmosphere, the multiple spikes of iridium and extraterrestrial amino acids in the K-Pg boundary zone, the extraterrestrial soot and elemental carbon in the boundary layer, etc.
The boundary zone is a roughly 100-cm layer encompassing both sides of the K-Pg boundary. It represents catastrophic events and was formed for about 100,000 years.
The thin 1-cm K-Pg boundary layer is approximately in the middle of the boundary zone.
The boundary zone contains extraterrestrial amino acids and iridium spikes before and after the impact event.
In 1980, Science magazine published a dinosaurs-killed-by-a-giant-asteroid theory by Luis Alvarez.   Critics asked how creatures outside the impact area were killed.
Alvarez replied:

“From darkness.  The impact created huge amounts of dust, cutting off the sun’s power by up to 20% for 8 to 13 years.”

Actually, the “dark times” lasted much longer — about 100,000 years, and started a long time before the impact events.
Long-period comets have highly eccentric orbits, extending to the far reaches of the Solar System, and periods ranging from 200 years to thousands or even millions of years.
Sometimes they make close passages by the planets and the Sun, diverting into the inner Solar System and becoming short-period comets.
When comets approach the Sun, they begin to sublimate (cometary material transits directly from solid state to gas) and vaporize, creating an envelope of thin gas and fine dust. Sunlight pushes the gas and the dust of the comet away to form a tail.  The comet is exhausted when most of the volatile material contained in the nucleus evaporates away by the Sun, and the comet becomes a much smaller, dark, inert lump of rock or rubble that can resemble an asteroid.
The size of the original K comet (K for Cretaceous, or Killer) was more than 100 km in diameter, probably 300 to 400 km. Comets could be much larger than these dimensions, reaching diameters of thousands of kilometers.
If the orbit of the cometary dust intersects the Earth’s orbit, our planet and its atmosphere sweep through the dust stream every year, experiencing meteor showers and the deposition of fine dust on the surface of the globe. The cometary dust, containing amino acids, iridium, etc. was exhausted for about 100,000 years. The amino acids and iridium enrichment before and after the K-Pg boundary had several peaks. It was deposited in layers with larger quantities of amino acids and iridium, ergo Earth passed several times through much thicker cometary dust clouds.
In such a flyby of a huge comet, Earth would accumulate a large mass of dust in the upper atmosphere, slightly changing the climate and inhibiting the photosynthesis of land and marine organisms. Major food chains would be disturbed. The reduction of the plant mass would lead to starvation of plant-eating animals. The first victims were the large herbivores on land and in the oceans; especially the ones living at the Polar Regions, where the sunlight reduction by the dust cloud was more serious and the temperature drop was substantial, and the loss of plant mass was significant.
Large species at the top of the food chain, such as dinosaurs, are highly vulnerable to ecosystem disruption.
At the end of the Cretaceous, there were much more plant mass and animals per square km than today. Even small disturbances in climate, ecosystem, and food chain caused many animals to die off.
The cometary dust clouds phase lasted for tens of thousands of years before and after the cometary impact.
The Cretaceous extinction began tens of thousands of years before the K-Pg boundary.
The extraterrestrial soot in the K-Pg layer and K-Pg zone with multiple spikes of nonterrestrial amino acids and iridium one more time confirm that the demise of the Mesozoic world was caused by a comet, not by an asteroid or a volcano.
Copyright 2014 by Alexander Popoff
Author’s Official Website: http://www.alexanderpopoff.com/
Alexander Popoff is the author of the research books: 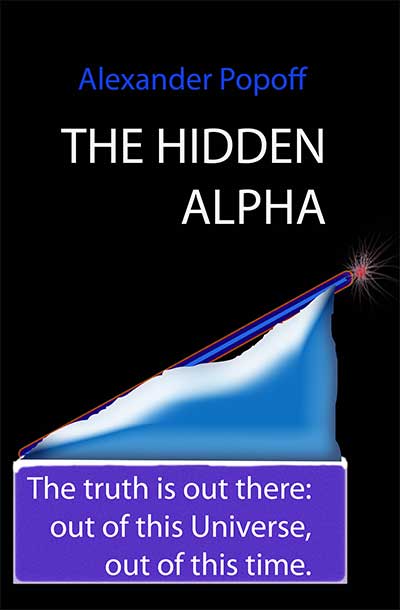 A truly satisfactory hypothesis answering the extraterrestrial intelligence conundrum should answer all these questions:
Why don’t we observe the activities of alien civilizations in the cosmos: robotic space probes, accidents, astroengineering, star wars, spaceships, communications, signals, radio wave leakage, and so on? Why don’t alien intelligences visit the Earth? What are all these phenomena: UFO, precognition (knowledge of future events, mainly through extrasensory means), telepathy, levitation and teleportation, miracles, impossible coincidences, telekinesis, shaman healing, religious phenomena, men in black, visions of mythological creatures, etc.? Who or what is causing them, and why?

A Fermi paradox resolutions that does not take into account the previous evolutionary cycles of our universe and the presence of mega-civilizations from previous universes or other universes can’t satisfactorily explain the grand question of non-terrestrial intelligence, and its attitude and behavior. Accepting the fact of the existence of mega-civilizations and the cyclic evolution of the Universe greatly changes the picture of the developing Universe, life, and intelligence.

X Factors are unknown, emerging risks to human wellbeing, even survival. These risks might come from inner space (human cognitive and body enhancement, associated with genetic engineering, nanotechnologies, neural and cybernetic implants, etc.) and outer space (discovery and contact with extraterrestrial life and artificial intelligence). That’s not preposterous science fiction mumbo jumbo of professor Farnsworth from Futurama but a serious discussion at the annual World Economic Forum in Davos, Switzerland, where the global elite was trying to find a way to make super profits without killing the entire labor force, their jargon word for humanity.

The Hidden Alpha answers many questions about survival and extinction of human and alien races, and their future; and raises new questions.

For the mega-civilizations, we are like a Monopoly game on the table, next to the sandwiches and the beer. We are totally visible, accessible, manipulable, and contactable.