The Milky Way is the galaxy that contains the Solar System. It is a barred spiral galaxy 100,000-120,000 light years in diameter containing 200–600 billion stars. The galaxy is estimated to contain 50 billion planets, 500 million of which could be located in the habitable zone of their parent star. The rotational rate: 1 per 15 to 50 million years. The galaxy is also moving at a rate of 552 to 630 km per second depending on the relative frame of reference. It’s estimated age is 13.2 billion years old, nearly as old as the Universe. The Milky Way is part of the Local Group of galaxies.

Photo Credit:  “The Blue Marble” is a famous photograph of the Earth taken on December 7, 1972 by the crew of the Apollo 17 spacecraft en route to the Moon at a distance of about 29,000 kilometers (18,000 statute miles). It shows Africa, Antarctica, and the Arabian Peninsula.

Note: A significant fraction of the human body is water, averaging 60 percent of the total body weight. In a newborn infant, this may be as high as 75 percent of the body weight, but it progressively decreases from birth to old age, most of the decrease occurring during the first 10 years of life.
The human brain is about 85% water and our bones are between 10 to 15% water. Human body is made up of atoms and molecules of chemical elements. If we examine these elements and their distribution in our bodies we see the following percentages by body weight: Oxygen  65.000, Carbon     18.000, Hydrogen 10.000, Nitrogen 3.000, Calcium   2.000, Phosphorus 1.100 (also small amounts of Potassium,  Sulfur, Sodium, Chlorine, Magnesium, Iron, Zinc, and few other trace elements). [ Source: Water in the Body ]

How many species on Earth?

To suppose that earth is the only populated world in infinite space is as absurd as to believe that in an entire field sown with millet, only one grain will grow. –Metrodorus of Chios, 4th century B.C.

Our sun is one of a 100 billion stars in our galaxy. Our galaxy is one of billions of galaxies populating the universe. It would be the height of presumption to think that we are the only living thing in that enormous immensity -– Wernher Von Braun

Estimated the number of species at nearly 8.8 million: 6.5 million on land, 2.2 million in ocean
So far, only 1.9 million species have been found.
26 times more animal than plant species; The research estimates that animals rule with 7.8 million species, followed by fungi with 611,000 and plants with just shy of 300,000 species.
Source: http://www.cbc.ca/news/technology/story/2011/08/24/science-species-earth-animals-plant-fungi.html

PS1: Terrestrial Planets and the Moon

Terrestial Planets. The approximate relative sizes of the terrestrial planets, from left to right: Mercury, Venus, Earth (with Moon) and Mars. Distances are not to scale.

Viewed from Earth, the Moon has (very nearly) the same apparent-sized (angular size) disk as the Sun because, although the Sun’s diameter is about 400 times as large as the Moon’s, it is also 400 times more distant. This allows total and annular solar eclipses to occur on Earth. 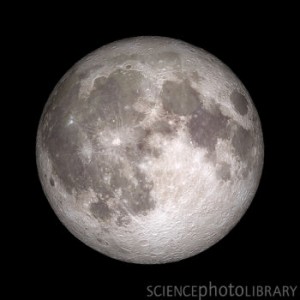 Caption: Full Moon. The lunar phases arise as the Earth-Moon-Sun angle changes as the Moon orbits the Earth. The Moon is full (14 days into its 28-day cycle) when the Earth-facing side is fully lit by the Sun. Darkness will then encroach as the lunar night advances over the Earth-facing side of the Moon. This image, published in 2011, combines data from the Lunar Reconnaissance Orbiter and Clementine spacecraft. The image is part of a sequence of lunar phases (see images C011/1544-1551), orientated for the northern hemisphere. As well as the phases, the sequence also shows variations in the Moon’s position and angle. 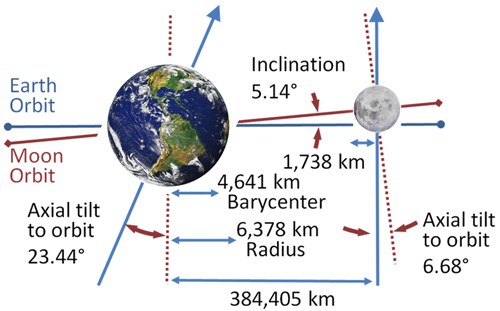 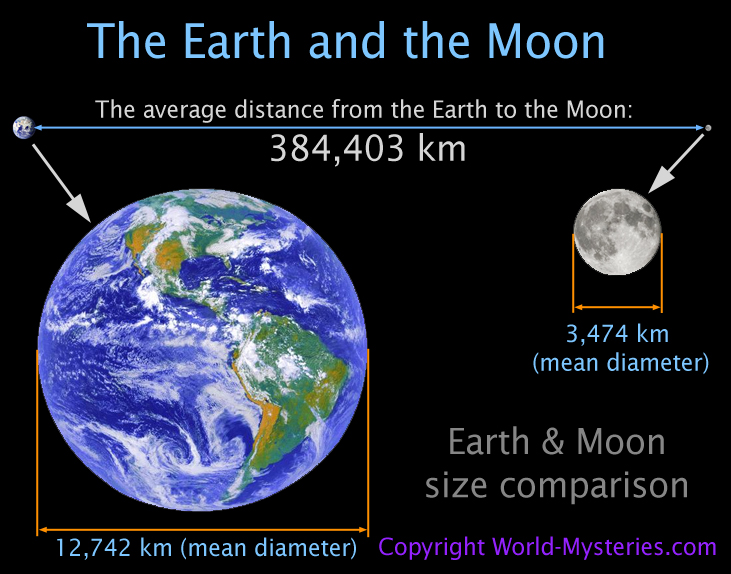 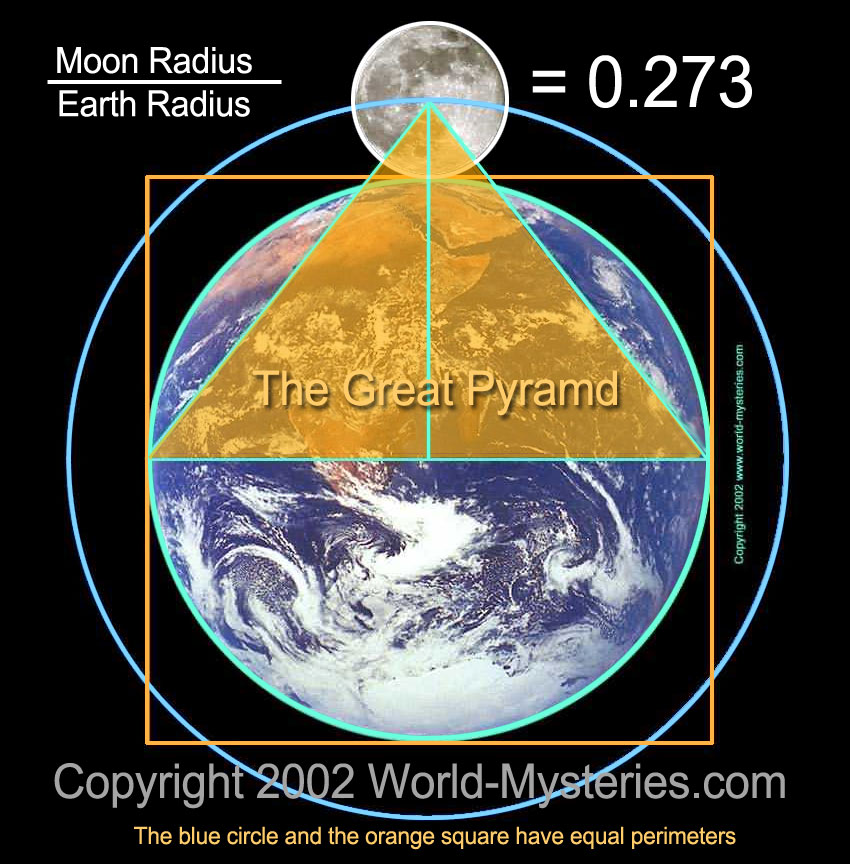 PS2: Our Location in the Universe

Location of the Earth in the Solar System

Solar system. Artwork of the solar system, showing the paths (blue lines) of the nine planets as they orbit around the Sun. The four inner planets are (from inner to outer): Mercury, Venus, Earth and Mars. Around the inner solar system is a broad belt containing thousands of minor planets (asteroids). The five outer planets are (inner to outer): Jupiter (lower right), Saturn (lower left), Uranus (upper left), Neptune (upper right) and Pluto (far right). The star clouds of our galaxy, the Milky Way, appear as a broad luminous band at upper right. 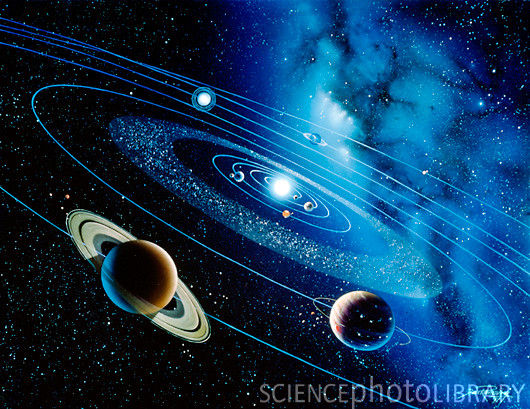 Solar system. Computer illustration showing relative sizes of planetary orbits. The inset shows the inner Solar System magnified from the main image. The mean distance from the Earth to the Sun (approximately 150 million kilometres) is termed an astronomical unit (AU). While the inner planets are relatively close together, the outer solar system is increasingly spread out. For example, the mean distance between the gas giants Uranus and Neptune is over 10 AU. The small rocky planet Pluto is the furthest from the Sun on average, orbiting at a distance of around 40 AU. 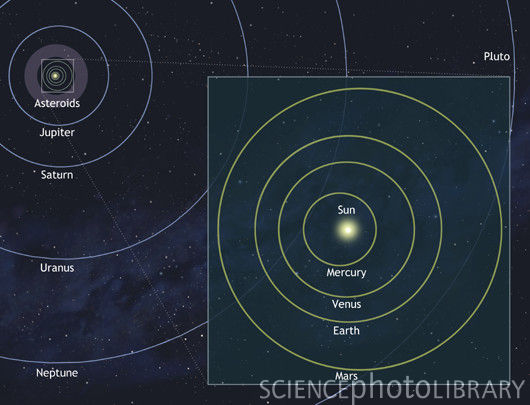 In 1768, Bode published his popular book, “Anleitung zur Kenntnis des gestirnten Himmels” [Instruction for the Knowledge of the Starry Heavens]. In this book, he described an empirical law on planetary distances, originally found by J.D. Titius (1729-96), now called “Bode’s Law” or “Titius-Bode Law”. 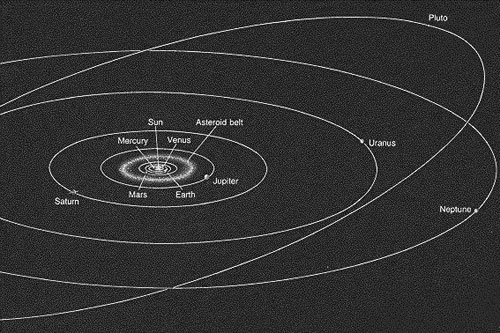 The original formula was:

The resulting sequence is very close to the distribution of mean distances of the planets from the Sun
expressed in Astronomical Units (AU):

Nearest Stars to the Sun

Nearest stars to the Sun, computer graphic. The 30 stars nearest the Sun (centre) are found in the 20 star systems shown here. The concentric circles are 1 light year apart, out to 10 light years from the Sun, and lines show the positions of the stars above (yellow) or below (red) the celestial equator. The closest stars are part of the Alpha* Centauri star system (below Sun). The brightest star in the night sky, Sirius, is at centre right. The colours of the stars indicate the type of star (Sun-like stars are yellow). For a version of this graphic without labels, see R620/275.

* Alpha Proxima is our nearest neighboring star: 4.3 light years away. It’s actually one of a three-star system that includes Alpha Centaur. Two stars tumble about each other and the third star orbits those two. 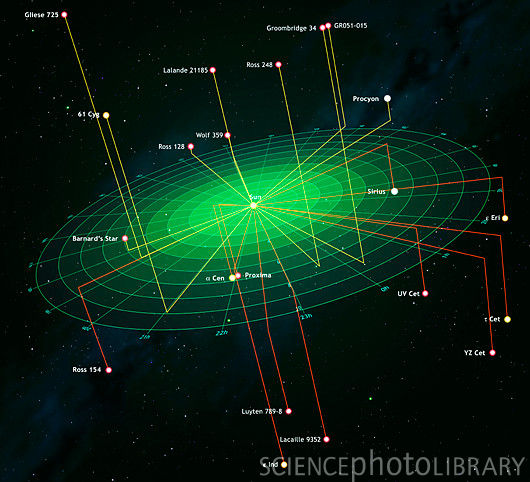 Location of the Solar System in our Galaxy (The Milky Way)

Artist’s conception of the spiral structure of the Milky Way with two major stellar arms and a central bar. “Using infrared images from NASA’s Spitzer Space Telescope, scientists have discovered that the Milky Way’s elegant spiral structure is dominated by just two arms wrapping off the ends of a central bar of stars. Previously, our galaxy was thought to possess four major arms.” 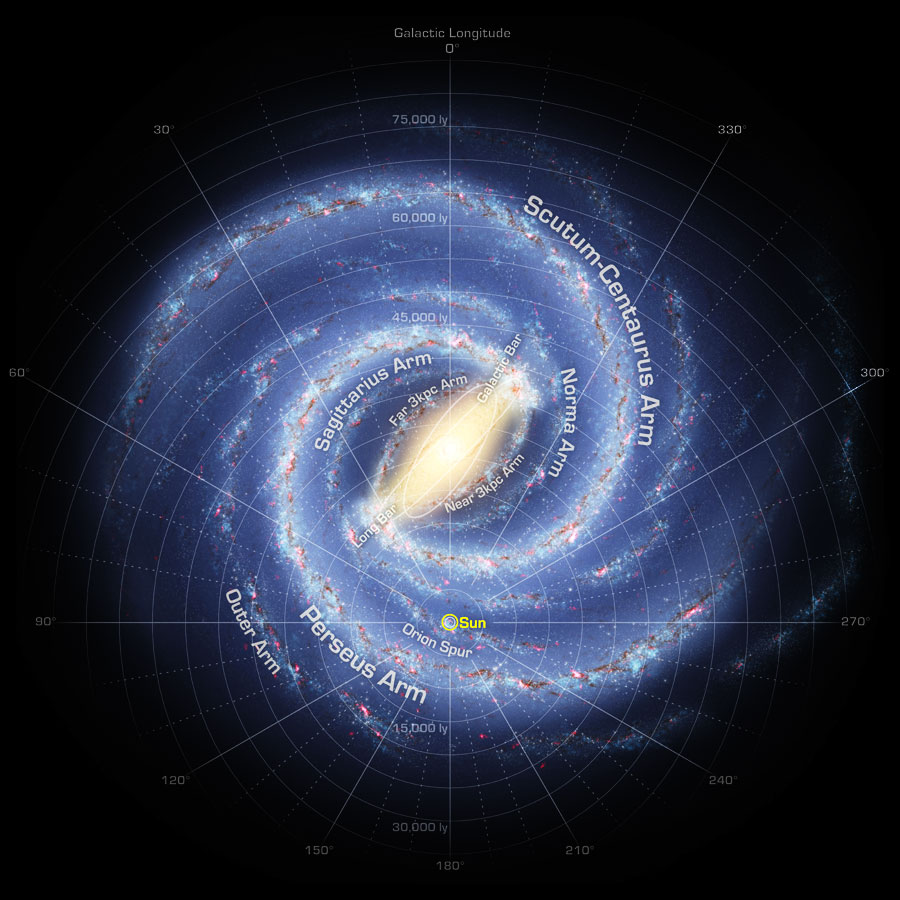 The solar system orbits the center every 250 million years: a galactic year

Earth’s Location in the Universe

A diagram of Earth’s location in the Universe in a series of eight mapsthat show from left to right, starting with the Earth, moving to the Solar System, onto the Solar Interstellar Neighborhood, onto the Milky Way, onto the Local Galactic Group, onto the Virgo Supercluster, onto our local superclusters, and finishing at the observable Universe. Courtesy of Wikipedia and Azcolvin429 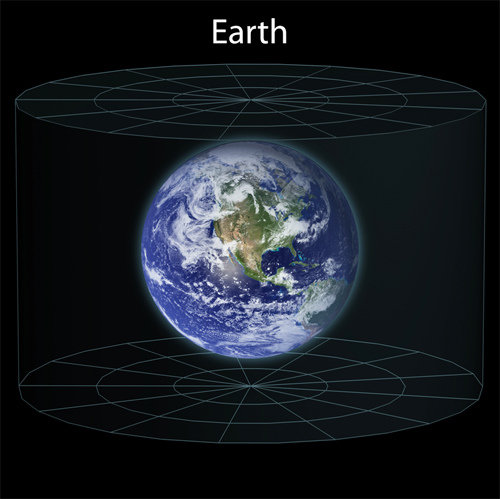 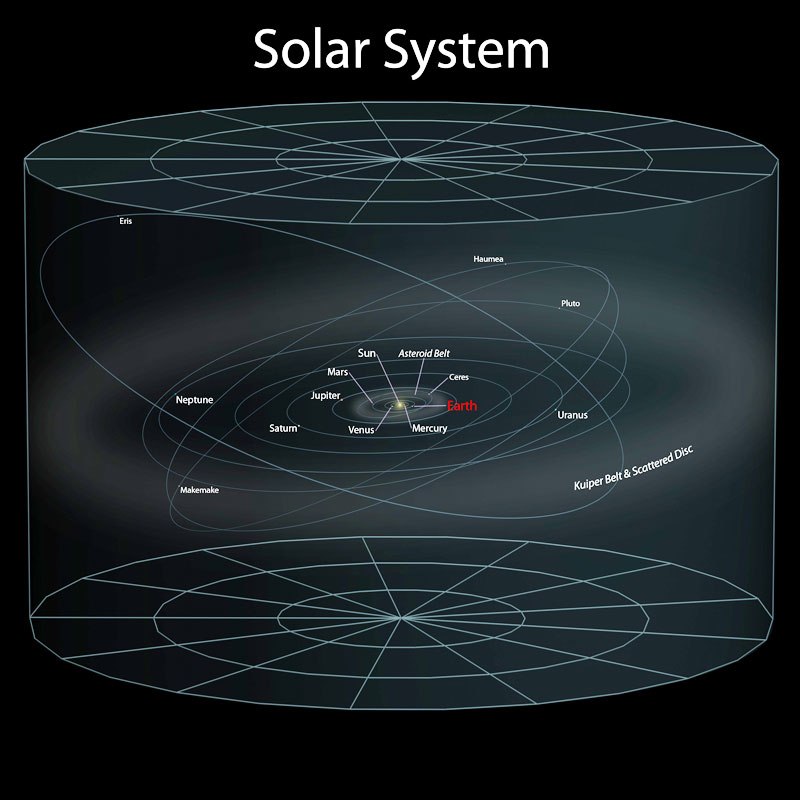 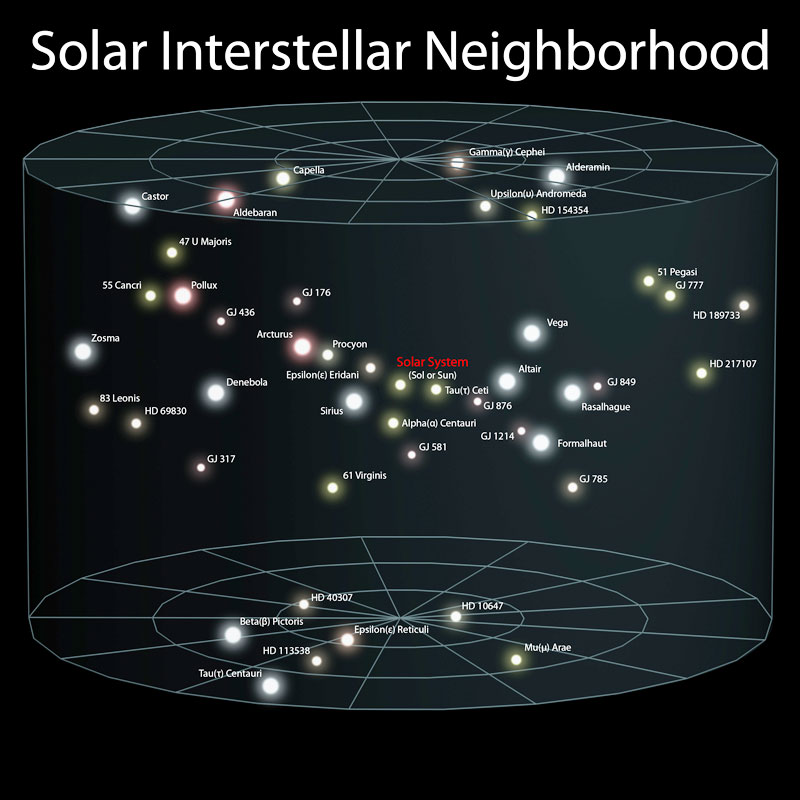 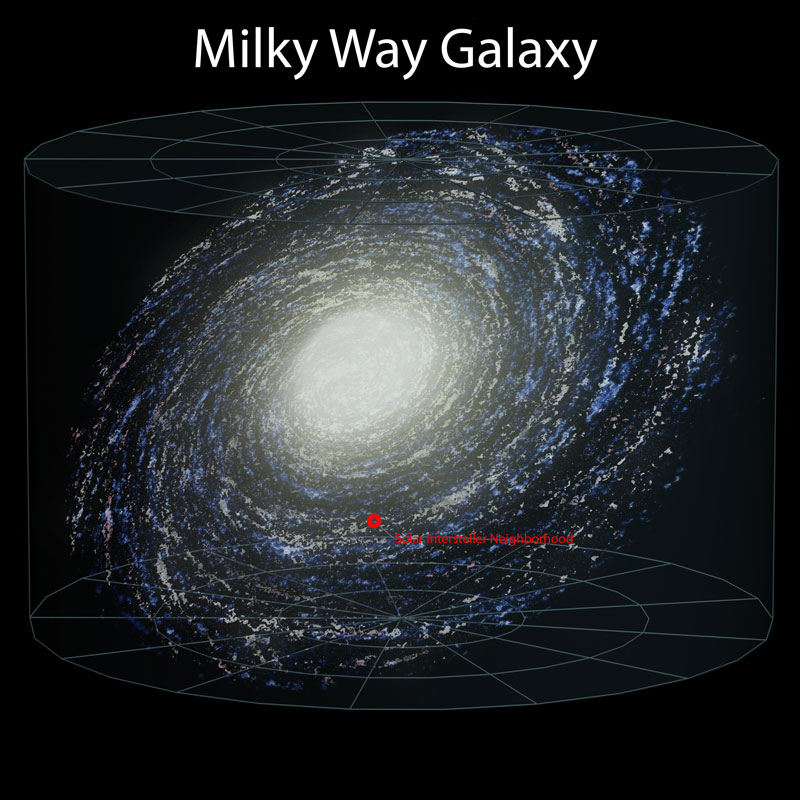 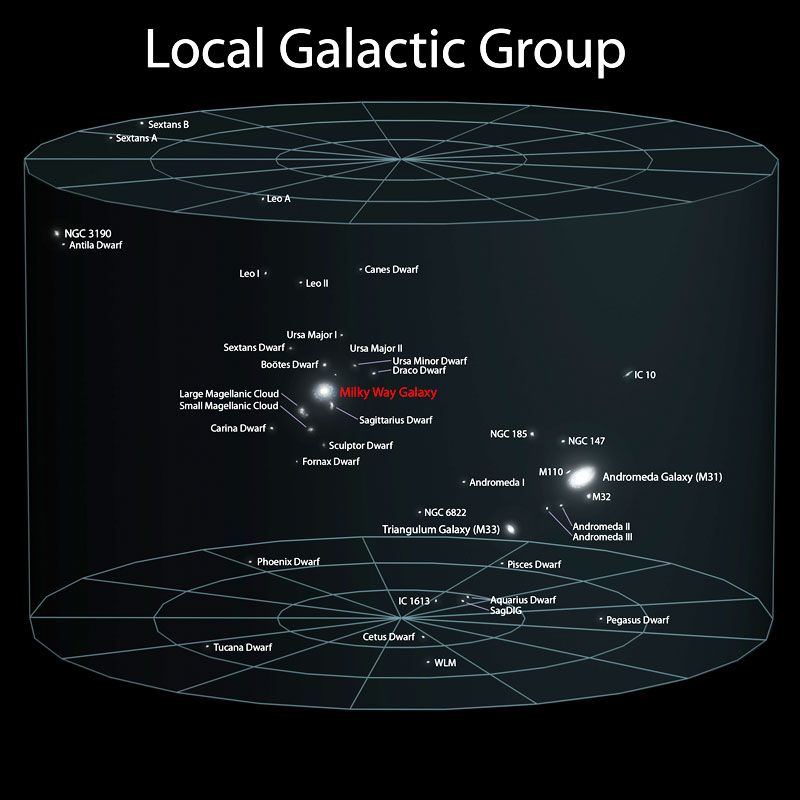 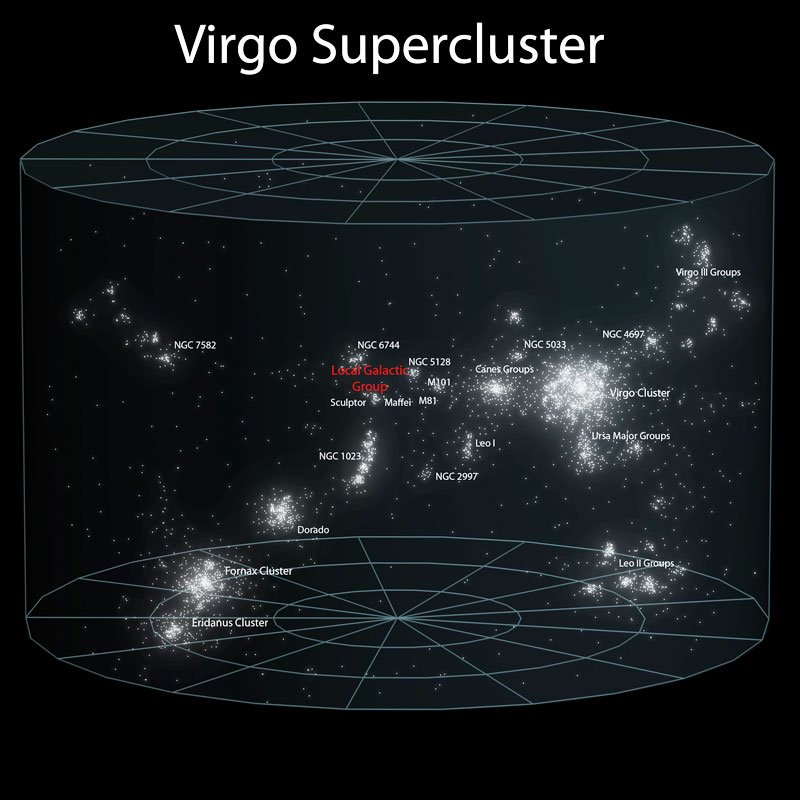 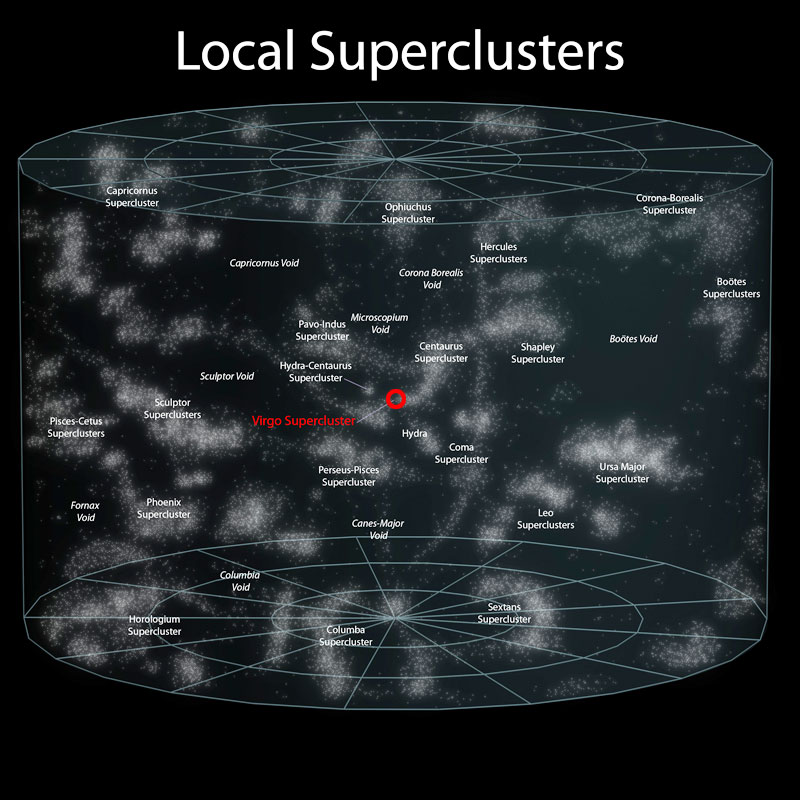 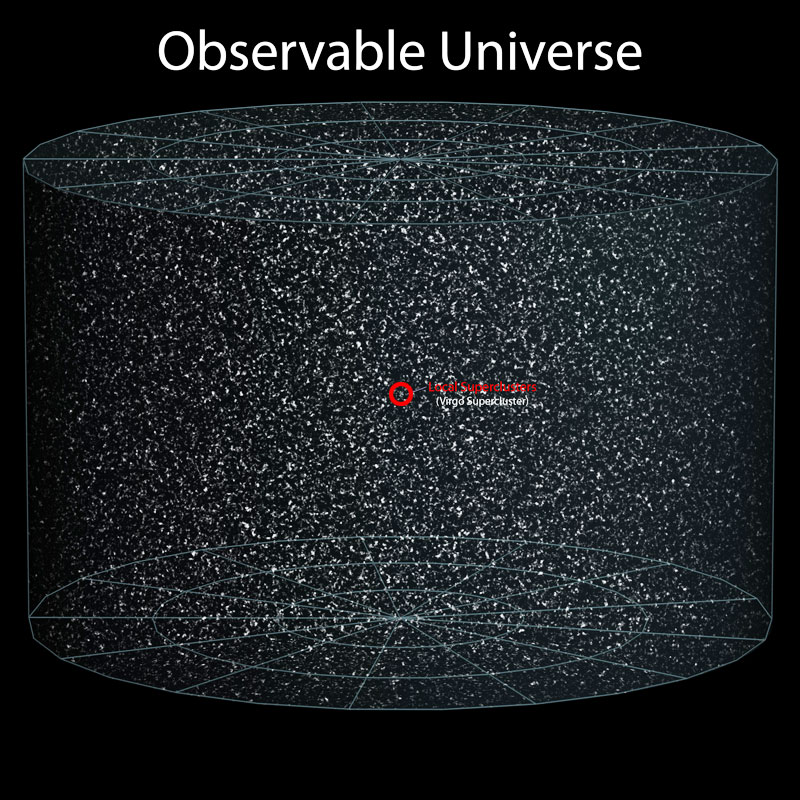 Courtesy of Wikipedia and Azcolvin429

Animals and plants are living effects of Nature; this Nature… is none other than God in things… Whence all of God is in all things… Think thus, of the sun in the crocus, in the narcissus, in the heliotrope, in the rooster, in the lion…. To the extent that one communicates with Nature, so one ascends to Divinity through Nature.  — Giordano Bruno, 1584

The fools of the world have been those who have established religions, ceremonies, laws, faith, rule of life. The greatest asses of the world are those who, lacking all understanding and instruction, and void of all civil life and custom, rot in perpetual pedantry; those who by the grace of heaven would reform obscure and corrupted faith, salve the cruelties of perverted religion and remove abuse of superstitions, mending the rents in their vesture. It is not they who indulge impious curiosity or who are ever seeking the secrets of nature, and reckoning the courses of the stars. Observe whether they have been busy with the secret causes of things, or if they have condoned the destruction of kingdoms, the dispersion of peoples, fires, blood, ruin or extermination; whether they seek the destruction of the whole world that it may belong to them: in order that the poor soul may be saved, that an edifice may be raised in heaven, that treasure may be laid up in that blessed land, caring naught for fame, profit or glory in this frail and uncertain life, but only for that other most certain and eternal life.  — Giordano Bruno, 1585