In the beginning there was Existence alone – One only, without a second. He, the One [Brahman], thought to himself: “Let me be many, let me grow forth.” Thus out of himself he projected the universe, and having projected out of himself the universe, he entered into every being. All that is has its self in him alone. Of all things he is the subtle essence. He is the truth. He is the Self. And that … THAT ART THOU!

Discovering the Mystery of Existence

Intertwined in this “fun” experience of living life is the length, width, breadth and timelessness of the greatest mystery of the universe. If we can attain the above experience via Godly Virtual Reality in this human form, might it be possible to understand how we manifest here in Time/Space? It has always been said, we were created in His image. Who can refute that we are all an experiment of a higher, mental being that is currently enjoying a broadcast reality via quantum particles that are electromagnetically constituted into this reality that we “think” we are experiencing right now. 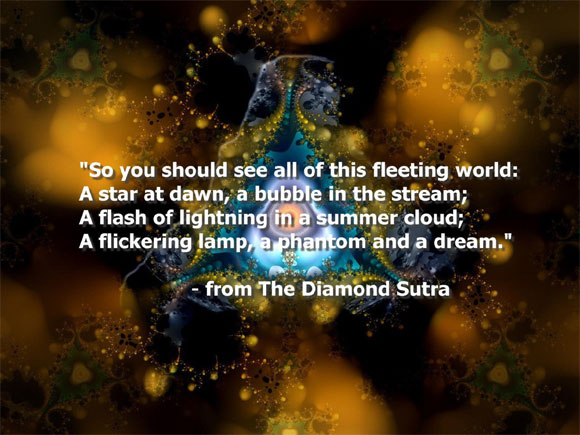 Hindu, the oldest religion on Earth, speaks of the One with no second, who lives through all of us in his “playing.”   Is God playing life through us and we just forgot that we are part of a holographic realm where experiencing an atomically materialized VR is the preoccupation of Eternity? 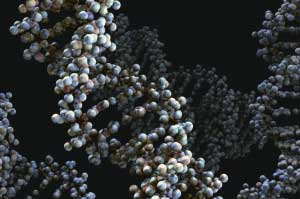 Think of your own becoming. When you were conceived, you and your DNA program came into a body that was new and hard to maneuver in a physical state. God’s VR apparently has a learning curve. You had to get familiar with the new apparatus and it took a major investment in the human body. REASON or mind began to learn to leverage the Holy Temple’s tools.  It was trial and error to get to your best effort/s. When a baby first arrives on Earth he/she is mentally more a part of everything or what some call the Other or the Essence. Some say we are actually smarter at birth and just learn to be somatically stupid. 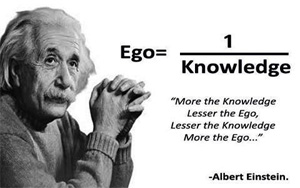 During the first few months, ego has not yet made its stand against the universe. The ego-image has not yet formed until it begins to observe itself in the eye of the other. Mirroring sets the self into a reality that is shown or received via sensors.

Sensory experiences create the other for the individual. Soon you will learn to forget where you came from because of the dictates of this state of sensory overload.   Learning to live in this physical world is our crux of being…to become. We learn to stand upon our experiences as a cushion from the void (a place we only know of in another state). The void represents the unknown or feeling of loneliness and awe. We feel very small against our lack of knowing. It has been posited that, if we are not observed by the other, we begin to feel lonely as if we do not exist. Recognition and observation is basic to (quantum) being for all parts that makes up the universe. Worthiness began to set the stage for worship when mankind sought to remember his being in this physical state. Religion was once the science of that being.

Do all of our religious writings suggest that at the core of those impassioned words lies the secret and the truth of our reality? Yes. Religious traditions say that God gave us being and the Word — REASON. Reason or mentality is our existence within the somatic-vehicular experience. Our bodies are our holy temples or means of motivation in a physical state. We should not do harm to our Holy Temples. Another point of Reason is that we should love our neighbors as we love ourselves. This may be because we are our neighbors as a result of their input to our being. It is possible that at the end of this God projected VR, we’ll learn that we did all those dirty deeds to ourselves. The above may be the Why of religion… a method to awaken to the real being involved in this life episode. 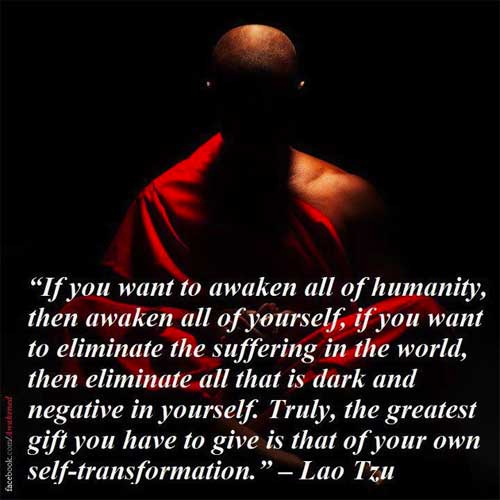 Today almost all members of our scientific community are gradually coming to realize that reality is indeed beyond our current theories and some have suggested that our environ is a God-like concept…the god of Mental Universal technology on an unbelievable scale…the quantum entity. Some say that the universe is a massive holographic computer where numbers are the language that it creates for its virtual reality from. When great scientists like David Bohm, Paul Davies and others marvel that mankind can even contemplate the universe, what Bohm calls the holomovement — a realm that is a manifestation or broadcast of Being, progress in existential understanding is being made. How can mankind even think about something so magnificent as the makeup of himself and the universe? Quantification is the key here — to assign REASON is to measure knowing in a physical state. This universe may be a combination of VR, quantum physics, nanotechnology, holography, fractal geometry, plasma physics, computational mirroring, inherent cosmological understanding and much more. The possibility that we may discover the truth of what we are, might just be found in the Virtual Reality Synergism currently being exposed as a mirror to our psyche and our soul. 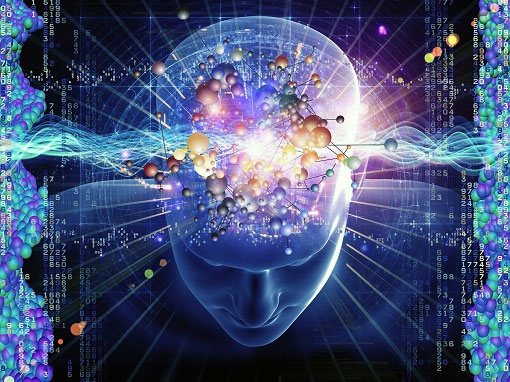 Over the next few years mankind will be subjected to the possibility of universal knowing on a scale that could only be called a “revelation.” Soon, humanity may learn that all those ancient words that our ancestors were in awe of, will suddenly come into a living understanding that will cause a new birth of higher knowing. This new stage will amount to a Being full of billions and billions of experiences incorporated to embark upon a new direction of increasing cognition and spirituality. Then mankind will leave this “wheel” (Earthly existence) and graduate to things that we can only dream of — unless our dreams are the reality of this VR? To think that this could happen was once laughed at by skeptics, but they probably have not had the experience of even the current versions of Virtual Reality.

Getting a grip on reality

If people think VR is somewhat unbelievable, read this –technologists and scientists for business, the Department of Defense and NASA are working hard to help us get more out of virtual reality. They are working on a kind of camera that will reach out and grab reality no matter where it is. They believe that, if just a tiny particulate of the once known reality can be quantified (triangulated), then its reality can possibly be reconstituted using all the known equations of today’s mathematical (fractal geometry?) reality. What kind of camera could do this? Some call it a “reality-grabber.”

The reality-grabber is a computerized configuration that can measure and organize the environ that it comes in contact with via conventional camera and sophisticated digital scanning conversions of a multiplicity of electromagnetic data. Holography and fractal geometry would play an important role in the output of its malleable and quantifiable data. Such a machine would also know where it is at all times in the physical environment as it relates to planetary and Earthly data. With the above information and a “mirror” software ability to organize every little bit of information, such an apparatus could record and distribute data that would make Virtual Reality as common as today’s television only with billions of alternative programming options possible. Individuals wishing to have their own interactive ability with the output program could easily experience any number of sequences that others may never stumble upon. Variety would indeed be the spice of life.

I believe that one repercussion of the above technology will be, that we will have to rethink the concept of vocation. At this point in time, many people are already out of a job because of burgeoning technology and its only getting worse. With this new powerful concept of Virtual Reality exploding into our future, and because of the prospects of the reality-grabber, almost all creative informating (metamorphosis of media) activities will also ignite into a chaos of information saturation. Consider that   all of us will be showing-off the “systems” creativity, who will be around to buy when all of humanity is experiencing the mindscape? Since technology replaces humanity, who will be able to afford it?   Are we humans creating our own dead end? Or, are we entering the process for creating the next world? 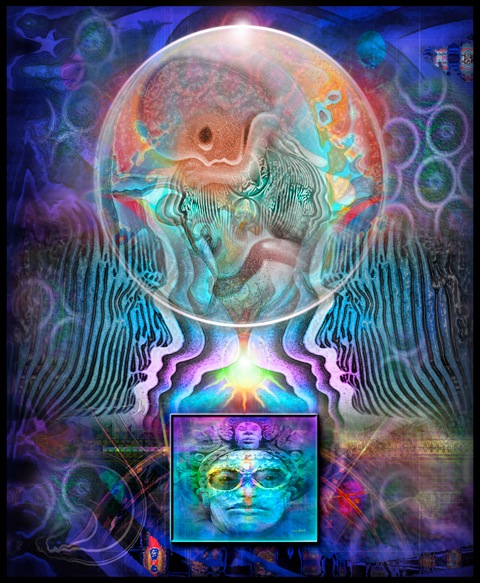 If we develop a reality-grabber that’s better than the lens of the human mind, where will we find ourselves?   True it will amplify our capabilities to that of simulated godhood, but what about the experiential and educational equity to the rest of us?   Some of us will become living gods — being able to afford the technology that will educate our children at a light-year/ lightspeed level over the common individual’s inaccessiblity to the techworld. We will create the ultimate disparity, opening ourselves up to polarizations that will need to be addressed in a civilization and world that can literally jump to a new punctuated equilibrium — creating a new Otherworld overnight. Conflict resolution will certainly be the business to be involved in, (lawyers and psychologists will have more work) as humanity continues to become the behemoth that some of us once saw on our ever expanding horizon of cybermedia.

Overcoming the barriers to Mind and Body

The next step beyond the digitizing of reality will lead to the “beaming up of Scottie” or Soulular Transcendence.   Even now, scientists are working at breakneck speed to convert our digital world to one embracing DNA and its dimensional enhancement of computing via four molecule combinations — A T C G rather than 0 and 1. Thus, we may begin to understand the ancient messages of Brahma (Hari the four-faced)   who, according to Hindu tradition, was the instrument of creation in conjunction with the First Cause. Here we may rediscover knowledge that humanity once took for granted. Once humanity unites the disciplines of Genetic Engineering with the symbol of the ancient caduceus, which is DNA’s double helix, then we will begin to create tools that will build a new and higher understanding of universal purpose. Building the super-mind via the tools of DNA through the amplification of neuronic-technology (neurons of the human brain) will set our flight from Earth toward the super-universe. Before this happens, mankind will need to fully understand the connection between himself and the Divine act of creation including the true understanding of Light and Mind.

Note: Illustrated by the W-M  Editor