Chris Duane has just done a new YouTube video about deleting Facebook. He believes Facebook is emblematic of what’s wrong with American culture and society today. Everything about Facebook is superficial and unreal: the way people look, the messages communicated, and the friends people claim to have but don’t really. What passed to meaningful and important in contemporary society, is but an illusion. Just like our money and the nutritional value of our feed, there’s a fundamental lack of substance.

This false paradigm is quickly coming to an end. With the eventual collapse of the dollar and the return to real honest money, soon much of the fake structures in today’s world will cease to function and will no longer exist. While getting to this place will be challenging, it is well worth the journey.

Facebook will probably reach 1 billion users sometime in August 2012. In the past, “active” has meant that these people log in once a month. What’s truly stunning is that Facebook says more than 50% of its users log in every day. 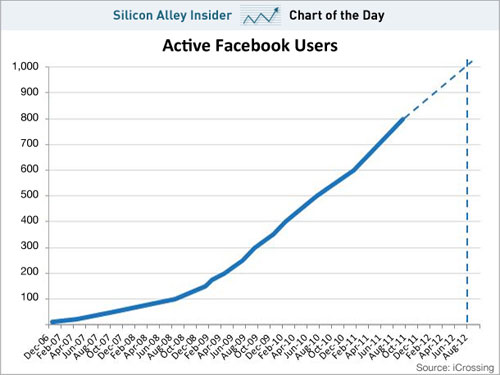 Facebook is a social networking service and website launched in February 2004, operated and privately owned by Facebook Inc. As of February 2012, Facebook has more than 845 million active users. Users must register before using the site, after which they may create a personal profile, add other users as friends, and exchange messages, including automatic notifications when they update their profile. Additionally, users may join common-interest user groups, organized by workplace, school or college, or other characteristics, and categorize their friends into lists such as “People From Work” or “Close Friends”. The name of the service stems from the colloquial name for the book given to students at the start of the academic year by some university administrations in the United States to help students get to know each other. Facebook allows any users who declare themselves to be at least 13 years old to become registered users of the site.

Facebook was founded by Mark Zuckerberg with his college roommates and fellow students Eduardo Saverin, Dustin Moskovitz and Chris Hughes. The Web site’s membership was initially limited by the founders to Harvard students, but was expanded to other colleges in the Boston area, the Ivy League, and Stanford University. It gradually added support for students at various other universities before opening to high school students, and eventually to anyone aged 13 and over. However, based on ConsumersReports.org in May 2011, there are 7.5 million children under 13 with accounts and 5 million under 10, violating the site’s terms of service.

In January 2012 the countries with the most Facebook users were:

All of the above total 309 million members or about 38.6 percent of 800 million Facebook’s worldwide members.

Mission: Facebook’s mission is to give people the power to share and make the world more open and connected.

Company Overview: Millions of people use Facebook everyday to keep up with friends, upload an unlimited number of photos, share links and videos, and learn more about the people they meet.

Facebook has met with controversies. It has been blocked intermittently in several countries including the People’s Republic of China, Iran, Uzbekistan, Pakistan, Syria, and Bangladesh on different bases. For example, it was banned in many countries of the world on the basis of allowed content judged as anti-Islamic and containing religious discrimination. It has also been banned at many workplaces to prevent employees from using it during work hours. The privacy of Facebook users has also been an issue, and the safety of user accounts has been compromised several times. Facebook has settled a lawsuit regarding claims over source code and intellectual property. In May 2011 emails were sent to journalists and bloggers making critical allegations about Google’s privacy policies; however it was later discovered that the anti-Google campaign, conducted by PR giant Burson-Marsteller, was paid for by Facebook in what CNN referred to as “a new level skullduggery” and which Daily Beast called a “clumsy smear”.

In November 2011, several Facebook users reported that their accounts were hacked and their profile pictures were replaced with pornographic images. For more than a week, users’ news feeds were spammed with pornographic, violent and sexual contents. It has been reported that more than 200,000 accounts in Bangalore, India were hacked. Facebook has denied the claims, citing that “safety of the users was on the top of their priority list”.

Some argue that Facebook is beneficial to one’s social life because they can continuously stay in contact with their friends and relatives, while others say that it can cause increased antisocial tendencies because people are not directly communicating with each other. Some studies have named Facebook as a source of problems in relationships. Several news stories have suggested that using Facebook can lead to higher instances of divorce and infidelity, but the claims have been questioned by other commentators.

There has been much user discontent over Facebook’s mandatory changeover to the new Timeline profile. Some Facebook users reported discontent with having many Facebook status updates and photos from the past easily visible.

According to comScore, an internet marketing research company, Facebook collects as much data from its visitors as Google and Microsoft, but considerably less than Yahoo!. In 2010, the security team began expanding its efforts to reduce the risks to users’ privacy, but privacy concerns remain. On November 29, 2011, Facebook agreed to settle US Federal Trade Commission charges that it deceived consumers by failing to keep privacy promises.  Writers for The Wall Street Journal found in 2010 that Facebook apps were transmitting identifying information to “dozens of advertising and Internet tracking companies”. The apps used an HTTP referrer which exposed the user’s identity and sometimes their friends’.