PASADENA, CALIF.—In a show of technological wizardry, the robotic explorer Curiosity blazed through the pink skies of Mars, steering itself to a gentle landing inside a giant crater for the most ambitious dig yet into the red planet’s past. A chorus of cheers and applause echoed through the NASA Jet Propulsion Laboratory on Sunday night after the most high-tech interplanetary rover ever built signalled it had survived a harrowing plunge through the thin Mars atmosphere. “Touchdown confirmed,” said engineer Allen Chen. “We’re safe on Mars.”

Minutes after the 10:32 p.m. PDT landing, Curiosity beamed back the first black-and-white pictures from inside the crater showing its wheel and its shadow, cast by the afternoon sun.

It was NASA’s seventh landing on Earth’s neighbour; many other attempts by the U.S. and other countries to zip past, circle or set down on Mars have gone awry.

The arrival was an engineering tour de force, debuting never-before-tried acrobatics packed into “seven minutes of terror” as Curiosity sliced through the Martian atmosphere at 13,000 mph.

In a Hollywood-style finish, cables delicately lowered the rover to the ground at a snail-paced 2 mph. A video camera was set to capture the most dramatic moments — which would give earthlings their first glimpse of a touchdown on another world.

Celebrations by the mission team were so joyous over the next hour that JPL Director Charles Elachi had to plead for calm in order to hold a news conference. He compared the team to athletic teams that go to the Olympics.

“This team came back with the gold,” he said.

The extraterrestrial feat injected a much-needed boost to NASA, which is debating whether it can afford another Mars landing this decade. At a budget-busting $2.5 billion, Curiosity is the priciest gamble yet, which scientists hope will pay off with a bonanza of discoveries.

“We’re on Mars again,” said NASA chief Charles Bolden. “It’s just absolutely incredible. It doesn’t get any better than this.”

President Barack Obama tweeted his appreciation: “I congratulate and thank all the men and women of NASA who made this remarkable accomplishment a reality.”

In a statement, Obama celebrated the landing as “an unprecedented feat of technology that will stand as a point of national pride far into the future.”

Over the next two years, Curiosity will drive over to a mountain rising from the crater floor, poke into rocks and scoop up rust-tinted soil to see if the region ever had the right environment for microscopic organisms to thrive. It’s the latest chapter in the long-running quest to find out whether primitive life arose early in the planet’s history.

The voyage to Mars took more than eight months and spanned 352 million miles. The trickiest part of the journey? The landing. Because Curiosity weighs nearly a ton, engineers drummed up a new and more controlled way to set the rover down. The last Mars rovers, twins Spirit and Opportunity, were cocooned in airbags and bounced to a stop in 2004.

The plans for Curiosity called for a series of braking tricks, similar to those used by the space shuttle, and a supersonic parachute to slow it down. Next: Ditch the heat shield used for the fiery descent.

And in a new twist, engineers came up with a way to lower the rover by cable from a hovering rocket-powered backpack. At touchdown, the cords cut and the rocket stage crashed a distance away.

The nuclear-powered Curiosity, the size of a small car, is packed with scientific tools, cameras and a weather station. It sports a robotic arm with a power drill, a laser that can zap distant rocks, a chemistry lab to sniff for the chemical building blocks of life and a detector to measure dangerous radiation on the surface.

It also tracked radiation levels during the journey to help NASA better understand the risks astronauts could face on a future manned trip.

Over the next several days, Curiosity was expected to send back the first colour pictures. After several weeks of health checkups, the six-wheel rover could take its first short drive and flex its robotic arm.

The landing site near Mars’ equator was picked because there are signs of past water everywhere, meeting one of the requirements for life as we know it. Inside Gale Crater is a 3-mile-high mountain, and images from space show the base appears rich in minerals that formed in the presence of water.

Previous trips to Mars have uncovered ice near the Martian North Pole and evidence that water once flowed when the planet was wetter and toastier unlike today’s harsh, frigid desert environment.

Curiosity’s goal: to scour for basic ingredients essential for life including carbon, nitrogen, phosphorous, sulphur and oxygen. It’s not equipped to search for living or fossil microorganisms. To get a definitive answer, a future mission needs to fly Martian rocks and soil back to Earth to be examined by powerful laboratories.

The mission comes as NASA retools its Mars exploration strategy. Faced with tough economic times, the space agency pulled out of partnership with the European Space Agency to land a rock-collecting rover in 2018. The Europeans have since teamed with the Russians as NASA decides on a new road map.

Despite Mars’ reputation as a spacecraft graveyard, humans continue their love affair with the planet, lobbing spacecraft in search of clues about its early history. Out of more than three dozen attempts — flybys, orbiters and landings — by the U.S., Soviet Union, Europe and Japan since the 1960s, more than half have ended disastrously.

One NASA rover that defied expectations is Opportunity, which is still busy wheeling around the rim of a crater in the Martian southern hemisphere eight years later.

Could the Red Planet Support Life?

Curiosity, the newest Mars Science Laboratory scheduled to land on Mars in early August 2012 might answer this question

Mars is the fourth planet from the Sun in the Solar System. Named after the Roman god of war, Mars, it is often described as the “Red Planet” as the iron oxide prevalent on its surface gives it a reddish appearance. Mars is a terrestrial planet with a thin atmosphere, having surface features reminiscent both of the impact craters of the Moon and the volcanoes, valleys, deserts, and polar ice caps of Earth. The rotational period and seasonal cycles of Mars are likewise similar to those of Earth, as is the tilt that produces the seasons. 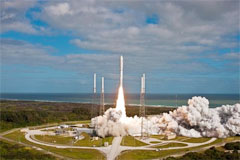 Launched on Nov 26, 2011,  the Mars Science Laboratory “Curiosity” is scheduled to land on Mars in early August 2012. [ Image Credit: United Launch Alliance ]
This exploration mission is unprecedented in goals and machinery. The wheeled robot is carrying suite of 10 instruments and even a laser to research the Martian past.

The rover will assess whether Mars ever was, or is still today, an environment able to support microbial life.

Mars Science Laboratory is part of NASA’s Mars Exploration Program, a long-term effort of robotic exploration of the red planet. Launched on Nov. 26, 2011, 7:02 a.m. PST (10:02 a.m. EST) Mars Science Laboratory is a rover that will assess whether Mars ever was, or is still today, an environment able to support microbial life. In other words, its mission is to determine the planet’s “habitability.”

To find out, the rover will carry the biggest, most advanced suite of instruments for scientific studies ever sent to the martian surface. The rover will analyze dozens of samples scooped from the soil and drilled from rocks. The record of the planet’s climate and geology is essentially “written in the rocks and soil” — in their formation, structure, and chemical composition. The rover’s onboard laboratory will study rocks, soils, and the local geologic setting in order to detect chemical building blocks of life (e.g., forms of carbon) on Mars and will assess what the martian environment was like in the past. 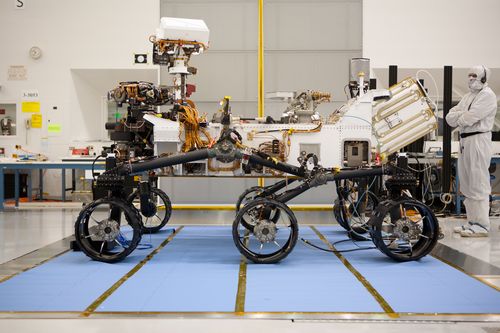 About the size of a small SUV, NASA’s Curiosity rover is well equipped for a tour of Gale Crater on Mars. This impressive rover has six-wheel drive and the ability to turn in place a full 360 degrees, as well as the agility to climb steep hills. During a nearly two-year prime mission after landing on Mars, the rover will investigate whether Gale Crater ever offered conditions favorable for microbial life, including the chemical ingredients for life.  Image Credit: NASA/JPL-Caltech

Mars Science Laboratory will rely on new technological innovations, especially for landing. The spacecraft will descend on a parachute and then, during the final seconds prior to landing, lower the upright rover on a tether to the surface, much like a sky crane. Once on the surface, the rover will be able to roll over obstacles up to 75 centimeters (29 inches) high and travel up to 90 meters (295 feet) per hour. On average, the rover is expected to travel about 30 meters (98 feet) per hour, based on power levels, slippage, steepness of the terrain, visibility, and other variables.

The rover will carry a radioisotope power system that generates electricity from the heat of plutonium’s radioactive decay. This power source gives the mission an operating lifespan on Mars’ surface of a full martian year (687 Earth days) or more, while also providing significantly greater mobility and operational flexibility, enhanced science payload capability, and exploration of a much larger range of latitudes and altitudes than was possible on previous missions to Mars.

Arriving at Mars in 2012, Mars Science Laboratory will serve as an entrée to the next decade of Mars exploration. It represents a huge step in Mars surface science and exploration capability because it will:

Article and Images Curtsey of NASA and JPL
Source: http://mars.jpl.nasa.gov/msl/mission/overview/