Every day I force myself to read The Guardian, especially the environment section. Apparently it is not too late to save the world. Carbon Dioxide in the atmosphere has reached 400 parts per million, when 350ppmv should be the limit. What absolute drivel! What total ignorance of the history of this globe!

No, no, no. The fight against ‘climatechange’, indeed the whole charge against changes in climate, is concentrated upon one small trace gas, Carbon Dioxide. The only weapon at the disposal of the ignoramuses, who govern us, is to cut emissions of Carbon Dioxide. Wow!

So let us get some facts straight. 400 parts per million translates into 0.04 % of the atmosphere. According to the Intergovernmental Panel on Climate Change, Great Nature produces 97.1% of that amount! That leaves just 2.9% of the 0.04 % is produced apparently by humans. Ah! My warmist friends nod sagely, it is that 2.9% of the 0.04% that tips the balance! What utter poppycock!

Besides which we now know that the Greenhouse Gases cool the Earth, as proposed by NASA.

(NaturalNews) Practically everything you have been told by the mainstream scientific community and the media about the alleged detriments of greenhouse gases, and particularly carbon dioxide, appears to be false, according to new data compiled by NASA’s Langley Research Center. As it turns out, all those atmospheric greenhouse gases that Al Gore and all the other global warming hoaxers have long claimed are overheating and destroying our planet are actually cooling it, based on the latest evidence.

As reported by Principia Scientific International (PSI), Martin Mlynczak and his colleagues over at NASA tracked infrared emissions from the earth’s upper atmosphere during and following a recent solar storm that took place between March 8-10. What they found was that the vast majority of energy released from the sun during this immense coronal mass ejection (CME) was reflected back up into space rather than deposited into earth’s lower atmosphere.

The result was an overall cooling effect that completely contradicts claims made by NASA’s own climatology division that greenhouse gases are a cause of global warming. As illustrated by data collected using Sounding of the Atmosphere using Broadband Emission Radiometry (SABER), both carbon dioxide (CO2) and nitric oxide (NO), which are abundant in the earth’s upper atmosphere, greenhouse gases reflect heating energy rather than absorb it.

“Carbon dioxide and nitric oxide are natural thermostats,” says James Russell from Hampton University, who was one of the lead investigators for the groundbreaking SABER study. “When the upper atmosphere (or ‘thermosphere’) heats up, these molecules try as hard as they can to shed that heat back into space.”

So the desperate champions who are out to fight against ‘climatechange’ are actually attempting to cut 0.00116% of the atmosphere. Does that not want to make you laugh? Or simply weep in desperation? How is it possible that grown men and women could be such wallies?

It reminds me of a great friend who wished to embrace Islam. He was told that he had to be circumcised. But, he protested, I am already circumcised. What else do they want to cut off?

The sheer idiocy of cutting emissions of Carbon Dioxide has to be seen to be believed. Everybody with a minimum knowledge of Biology knows that green plants love Carbon Dioxide and could do with 1,000 parts per million, both to aid growth and to provide the Oxygen which we humans and all the animal kingdom have need of.

To fight against ‘climatechange’ is to fight against Great Nature, effectively to declare that man in his ignorance is greater than Almighty God. But, of course, those who want to fight the forces of Nature don’t believe, don’t accept, the possibility of intelligence higher than their own.

There is this blind urge to demonise fossil fuels, which are the main providers of power for electricity, which distinguishes the modern world from the Middle Ages. The Luddites wish to put the clock back, and most of them don’t even know what Carbon Dioxide is, in any case. Just imagine if they succeeded, just imagine if we had to rely on the wind and the sun, all our computers would go down, all our trains would not run, all our aeroplanes would not fly and none of us would get paid our salaries or our pensions. Without fossil fuels we would take a gigantic step backwards into the Dark Ages. Is that what we really want?

The atmosphere of this blessed Planet is some 62 miles high up to the Karman Line, the edge of space. Do the Warmists even claim that this atmosphere as a whole is warming? No, of course not. They are only concerned with near surface temperatures at the very bottom of the Troposphere. Let me illustrate by showing a picture of Standard Atmosphere that is used by Airline Pilots. 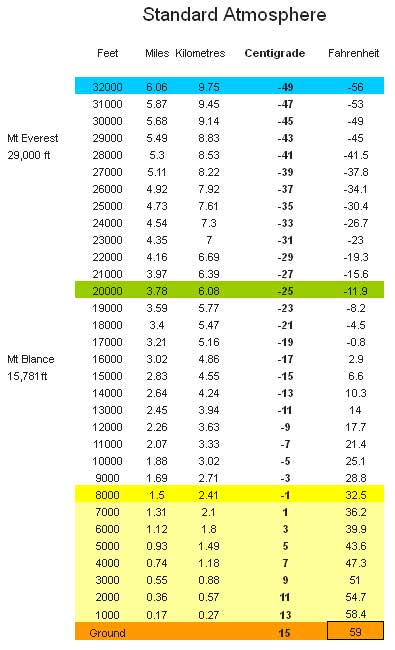 You will notice that the average temperature at ground level is taken to be 15C, but you may also have noticed that the average temperature in the South of England has barely reached 10C during this month of May! Nevertheless the point of the chart is to show that temperature declines by 2°C for every 1,000 feet. Any airline passenger can see this for themselves nowadays on the splendid monitors that are provided. The warmest part is near the ground. Why is that? At 8,000 feet, that is one and a half miles high, the temperature is already freezing.

Commercial aircraft flying at 33,000 feet near the top of the Troposphere and above the weather show a temperature of minus 50 degrees Celsius. Precious little warming in the Troposphere! So now we see clearly that the Global Warmers are only concerned with the first 1,000 feet above the surface – if that. The truth of the matter it is probably less than that – 100 feet, no, just 10 feet above the surface. Why so? What height are the weather stations? More like 5 feet.

Now we all know the shenanigans concerning these Weather Stations from the Climategate emails. Not unless there were a blanket coverage over the whole Earth would be able to get a reliable guide as to whether the near ground temperatures were rising or not. As it is we have to rely on hindsight. But is this not absurd that so much is made of these near ground temperatures, which also ignore two things – the temperature of the rest of the atmosphere and the temperature of the core of the Earth, and the temperature of the oceans. How an average is arrived at only the scientists at the Climatic Research Unit and the Goddard Centre know the secret datasets! All I know for sure is that I have to have the central heating on much of the day and this is almost June.

The Warmists make much of the supposed role of Carbon Dioxide in the atmosphere, accusing this gas of ‘causing’ Global Warming. Let us therefore examine more closely what they say, so that I do not misrepresent them. Let us see what the Government website says, when I challenged Sir John Beddington to prove that Carbon Dioxide warms the Planet. One of his sidekicks sent me the link to this government paper. http://www.bis.gov.uk/go-science/climatescience/greenhouse-effect

In the mid-nineteenth century John Tyndall carried out experiments on the radiative properties of atmospheric gases. He found that gases such as water vapour, carbon dioxide and methane strongly absorb infrared (thermal) radiation, while gases such as oxygen and nitrogen absorb very little [1].

We won’t quarrel with that, will we? He goes on:

Theoretical and observational developments in physics during the twentieth century have shown that this is because different molecules absorb and re-emit infrared radiation of different wavelengths, depending on their molecular structure. For example, we now know that carbon dioxide strongly absorbs radiation with wavelengths of around 15 microns [2], and re-emits radiation at the same wavelengths.

That’s OK too. So Carbon Dioxide in the atmosphere, which is shown in the Government Table to be only 0,038% of the atmosphere both absorbs and emits infrared. But can it emit more that it absorbs?
Clearly not. If I were to give you a gallon of petrol and you were to hand it straight back to me, would I then have 2 gallons?
Of course not! But that is what this paper argues. If Carbon Dioxide absorbs a packet of energy, a photon, and re-emits it, has it added to the sum total of energy?

Answer: Not at all. This is not science, it is simple arithmetic.

Furthermore, according to this paper, the radiative properties of the so-called Greenhouse gases only work one way and at night! Of course Carbon Dioxide and Water vapour in particular absorb the incoming infrared radiation from the Sun during daytime and act as a filter. Otherwise we would be as hot as the Moon is by day and as cold as the Moon by night. The Greenhouse Gases do more to keep the Earth cool than they do to keep it warm. Is it not amazing that the radiative properties of these gases are completely ignored for the incoming infrared, which are clearly far stronger than the outgoing?

Let us read carefully another paragraph: 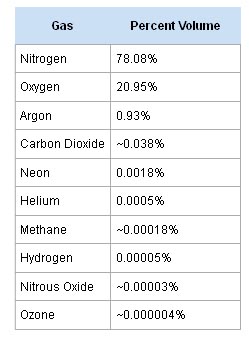 Of course, of course, how right he is. The visible light passes through but the atmosphere absorbs the incoming infrared radiation. That leads to cooling does it not? It is the very opposite of warming – the right science but the wrong conclusion.

Even NASA has been persuaded that Carbon Dioxide has a greater cooling effect than warming: