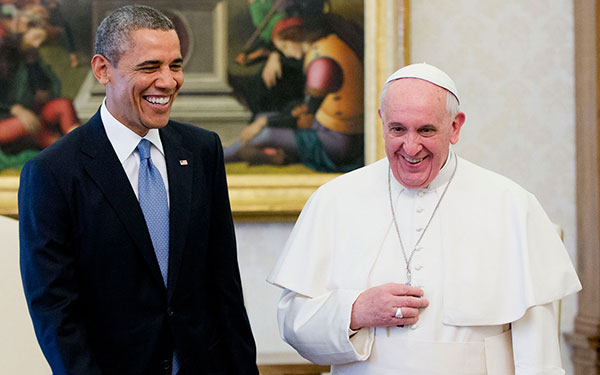 The Pope has given his backing to stopping changes of Climate. He is the Head of perhaps the most powerful Christian Church with some millions of adherents. Here is the spiritual Head, joining up with President Obama, leader of the most powerful nation on Earth. Is not that wonderful? They are backed in England also by a political Party that is growing rapidly  – namely, the Greens. Their leader, Natalie Bennett, is determined to put ‘stopping changes in Climate’ in the forefront of her agenda.

With such a triumvirate of Spiritual, Temporal and Political Power we may be sure that they will succeed and that us minor minions will be queuing up in order to have a certain preserve. Since I was born in Bournemouth and my middle daughter is in Torquay I make my bid straight away that those two towns should remain just as they are with a splendidly mild climate most of the year round.

Of course if you were to live in California it would be natural to hope that these great potentates should ask for more rain to fill the Red River, to stop forest fires and the drought that has assailed the region, all – no doubt about it – the result of man grossly warming the Globe. Can they act quickly enough? Ah! There’s the rub. Trouble is some people just don’t get it that Climate is changing.

But let’s not quibble – back to business. Can these three wise people – remember that Natalie is a person of the female sex – stop the ravages of tornadoes in Tornado Alley? That is something that needs to be addressed. Then there is the imminent approach of Christmas, and a lot of people are dreaming of a White Christmas, while other spoilsports are just not too keen on snow. Could we perhaps have the snow on Christmas Eve with a good melt just before the New Year? That would be good for the skiers, and not upset those who would travel to the tropics for some sunbathing.

Of course there will be a lot of bidding. We obviously don’t want climate to change, do we, but precisely at what point do we want it to stop changing? I mean, will these three be able to control El Nino that is so unpredictable? Will they be able to make all climates everywhere absolutely predictable, including all the microclimates? Or shall we have no more microclimates?  Will they be banned?

Of course we must not forget the tectonic plates, which have a habit of smashing into each other rather violently and causing earthquakes. Chile has just been disturbed and Nepal was devastated by these same earthquakes. Will His Holiness the Pope be able to put an end to earthquakes? If he is helped by President Obama and Natalie would that do the trick?

There are so many things that affect the Climate of the world, if there is such a thing. Of course, all those who believe in tackling Climate Change seem to believe that there is just one World Climate. Who are we ordinary mortals and sceptics to question such a thing?

With a bit of luck the monsoon season can be arranged so that it appears on the dot at a pre-arranged time. Likewise the rains in the Serengeti could be made a little sooner for the sake of the wandering elephants and lions.

There is another problem that comes to mind and that is the Gulf Stream. Obviously this stream does effectively warm the Arctic and cause some loss of ice, together with hot waters flowing from the interior of the Earth, and clearly this must be stopped to encourage the Polar Bears.

What is clear is that Climate has been changing in the past, but only gradually, but now man with his burning of fossil fuels has accelerated the whole problem. It has become clear that man is already mightier than Great Nature, and we are fortunate to have a forward-looking reforming Pope, so that we can shake off the old beliefs in Almighty God, but revere instead Al Mighty Gore.

There still remains the problem of the Earth’s journey round the Sun and the whole range of seasons, summer and winter.

Since these three great potentates are agreed on tackling Climate Change, the question arises for the faithful and even for the doubters, just exactly at what point will the climate change be halted? Could we step back into the pre-industrial Age, when there were no belching black chimneys, and nobody was wasting the world’s resources of fossil fuels? Admirable as that may be it does produce its own problems. Or could we go back to the height of the Mediaeval Warm Period? That’s difficult too, since that is now supposed not to have happened. But we could go back, with Natalie’s help no doubt, to the Cretaceous Period when the North Pole was so warm, so I am told, that one could grow tomatoes there. Even that poses a problem. Do Polar Bears eat tomatoes?

eBook by the Author

A breath of fresh air September 4, 2014
By Emmanuel Elliott
At last: a breath of fresh air and, yes, sanity, is blowing through the great climate change debate, thanks in part to the courage and commitment of people like Anthony Bright-Paul. For some years, this author has, metaphorically speaking, sat at the feet of a number of eminent scientists who have stayed true to the principles of scientific enquiry and analysis, many of whom have contributed to this book. Bright-Paul himself is a layman, albeit a highly intelligent one, so that he is now uniquely placed to share his findings with us in terms that we can all understand.
He makes the case – now supported by no less an authority than NASA’s Langley Research Centre – that practically everything we have been told by the mainstream scientific community and the media about the alleged detriments of greenhouse gases, and particularly carbon dioxide, appears to be false.
It seems that, far from greenhouse gases ‘causing’ global warming, precisely the opposite is nearer the truth. Indeed, in the interests of a truly green planet, far from cutting down on carbon dioxide emissions, this gas, which every human being and all the animal kingdom exhale night and day, could well increase exponentially to the benefit of all.
This eBook sets out to quash what the author sees as the quasi-religious and militant hogwash of the Anthropogenic Global Warmers. It turns the climate change debate on its head, therefore, and should be required reading for policymakers as well as for anyone who longs for a clear-sighted take on one of the great issues of our time.
Post Views: 12