Cheops Pyramid and Squaring the Circle

At the same place, the tenfold of stick is a mark of hairpin form, the hundredfold of it is marked by a helix while its thousandfold is represented by a mark of a lotus flower. 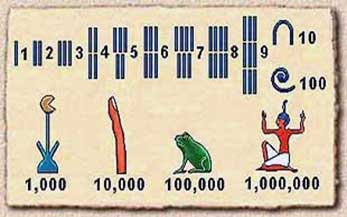 Thus, the mark representing thousand stick is equal to a lotus flower that might be equal even to the height of Cheops Pyramid, that is 146.7 m according to the above.
Neither places of value nor fractions were used, therefore:
if the height of Cheops Pyramid is supposed to be equal to 1000 stick unit, i.e. one lotus flower, the use of decimal system allows the bravura to be performed as follows:

Measure a section of thousand stick length (lotus flower) on the half diagonal of this square first,  then one of hundred sticks length (helix) from its end point, then one of ten sticks length (hairpin) from the end point of the previous two sections, then one of one stick length from the end point of the previous three sections; then, a simple addition of these four part sections gives the length of the half diagonal of the requested square requested to be 1111 units!  — (András Goczey)

Performing the verification for a circle with radius of 1000 units i.e. r = 1000, the above drawing procedure for the diagonal of the requested basic square gives 1111
The half edge of the basic square is given by dividing 1111 by square root of two.
Multiplying this ratio by four results in the half perimeter which gives the thousands of Pi i.e. 3142!
Half of the perimeter of a circle with radius of 1000 units is equal to the Pi-fold of its radius (Pi = 3.142) i.e. 3142.
It follows that, by using the above method of drawing, the perimeter of the basic square is equal to that of the great circle. Thus, the task can be solved!. 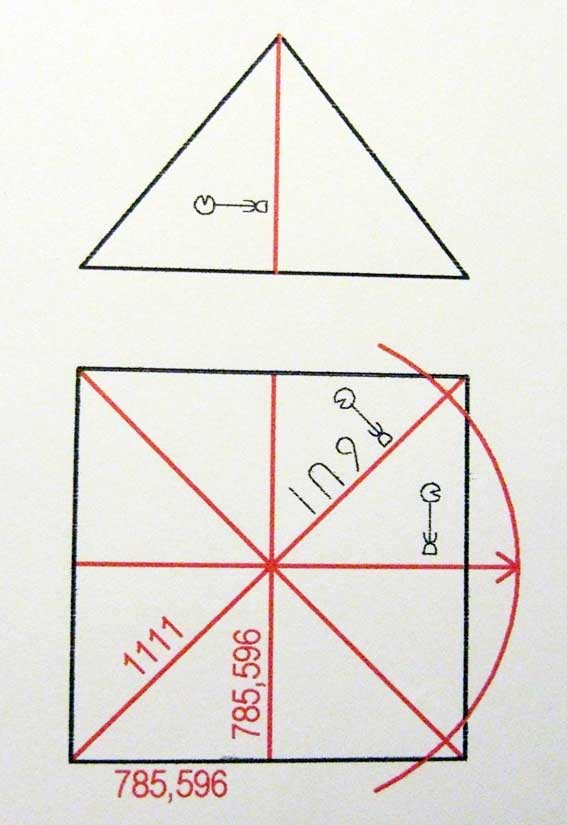 “According to the decision adopted by the Hungarian Academy of Sciences in the mid of 19th century: „dissertations dealing with quadrature of the circle, section of circle into three sections, the invention of perpetuum mobile will be refused without consideration”