Note: This is Part 2 of the article
“The World Economy is Saved!!!

Last week we speculated in Part 1 that the central banks, IMF, World Bank, world powers or someone out there had a plan to inject trillions into the world economy by the revaluation of numerous currencies using a new methodology of estimating the resources of a nation to value the currency.

Iraq once had a highly valuable currency but for the past 20 years it has been worth practically nothing.  Yet, it has valuable natural resources. So let’s assume for a moment that some people get a windfall.  A few quit their jobs (helping unemployment).  Some go out and buy cars, houses and stuff.  Uncle Sam and the States take their bite – a nice little windfall in taxes.  And of course, the US government gradually cashes in their stash through oil swap agreements.  None of these little deals are well known and are probably impossible to verify, so I am only going to speculate.

There are some things we will be able to verify.  We will know when currencies revalue and how much.  If they do, there will be many trillions of dollars dumped into the global financial system in a short period of time.  Will that help?  Of course, the Obama administration can think of ways to spend lots of money and so can the Europeans.  But what is the long term effect of having more money in circulation?

At one time the Spanish were extremely wealthy as they stripped the new found colonies of their wealth – gold and silver.  They were so successful and bought so much stuff from the rest of Europe, they ended up bankrupting themselves.  Water may be necessary for life but too much will drown you.  Too much wealth in circulation results in the devaluation of that wealth and can kill an economy. 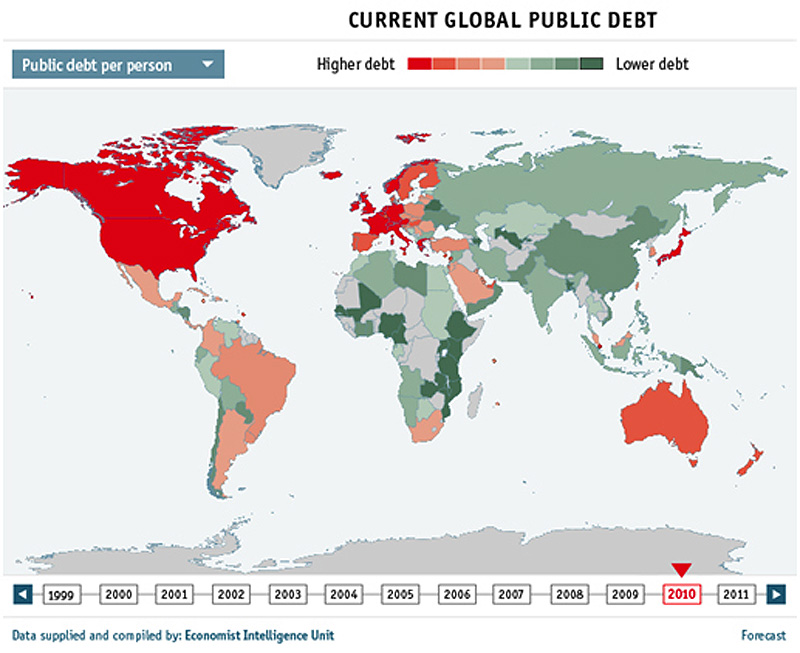 If we live on an island and produce so much and have a million dollars to buy stuff with and then, all of a sudden, the local bank decides it can make more if it prints three times the amount of money.  The GDP remains the same but the money supply triples.  What happens?  The cost of everything goes up.  The egg didn’t increase in value.  It is still just an egg.  But the money supply tripled and so the price of an egg tripled.  This isn’t to say there is a one to one relationship.  It is more complicated but that is the principle.  Inflation is caused by an increasing money supply.  That is what is causing the problem and it is the biggest tax you will ever pay.  The house my parents bought new in 1946 for $10,000 in LA is not really worth $300,000 today.  It is still a 960 square foot, three bedroom, one bath house.  The house isn’t “worth” more because it is bigger, better or newer.  The dollar is worth less.  Anything that causes the money supply to increase causes inflation.  Inflation is not the cost of goods going up but the value of the currency going down.

I have written many articles on the Federal Reserve System, fractional banking, fiat currency, statistics and government lies.  Money is created out of whole cloth (literally – see The Creature from Jekyll Island).  Once a loan is made, the money is increased ten or more times.  The Federal Reserve loans money to banks for next to nothing and the banks multiply it and loan even more.  The Fed dropped an extra two trillion dollars into the economy the past two years and they call it Quantitative Easing.  They increase bank reserves by purchasing bad assets, bonds or whatever the banks can’t handle.  The Government Accounting Office audited the Federal Reserve for the first time in its existence and found that it loaned banks around the world $16 trillion to bail them out ($11T to USA banks and $5T to foreign banks).

Let’s talk about debt for a minute.  The government, the individual American, every company, government entity and country in the world is awash in a sea of debt.  In America alone there is debt everywhere.

We could go on and on and on.  This is many times our GDP.  Does it matter?  You bet it does.

DEBT THAT WILL BRING DOWN THE WORLD ECONOMY

Now we go on to another type of debt, the type that brought down banks and investment houses in 2008 – derivatives.
According to Investopedia, a derivative is  “A security whose price is dependent upon or derived from one or more underlying assets. The derivative itself is merely a contract between two or more parties. Its value is determined by fluctuations in the underlying asset. The most common underlying assets include stocks, bonds, commodities, currencies, interest rates and market indexes. Most derivatives are characterized by high leverage.”

Let’s put it in simple terms.  They package debt, whether mortgages, student loans or government bonds, get it rated high by a rating agency and then sell and resell and resell it to investors.  They can leverage the value by 20, 40 or even 100 times.  If the instrument fails, all debts have to be paid off and the whole string comes unraveled.  This is what happened to Lehman Brothers, and recently to MF Global.  One would think we learned our lesson but instead worldwide derivative exposure is $1.2 Quadrillion.  Surely we learned our lesson after the 2008 meltdown.  No, banks increased total outstanding derivatives by a record $107 Trillion in 6 Months!  This is the outstanding derivatives reported by the world’s financial institutions to the BIS for its semi-annual OTC derivatives report titled “OTC derivatives market activity in the first half of 2011.”  This is the stuff that the Euro debt is made of! The GDP of the US is $16 trillion and the entire world GDP is $60 trillion!  There isn’t enough money in the world to cover this exposure.  Banks and governments are gambling with our money and they keep bailing themselves out at our expense!

We are drowning in a global sea of debt.  More cash coming from a massive revaluation of world currencies will only spur the government spenders on and on adding more fuel to the fire.  Increasing the global liquidity will only hasten more spending and more debt.  There isn’t enough money in the world to cover this sea of debt.  I only gave the U.S. side, but every country in the world is the same.  The tendency of governments is to spend more than they have, to print money until it is worthless.

If the government leaders understood and had the discipline, they would let banks and businesses fail.  They would let the debt work its way out.  They would lower taxes, encourage private sector business growth, but they won’t.  The people cry for cake and cake they will get!  They won’t settle for less.  The truth is, it is so far out of control, it is just a matter of time and none of us know the rate or the date or the time.  History can turn on a dime and the world we thought was so secure today is chaos tomorrow.

Some years ago I was meeting with the Minister of Health of El Salvador and pointed out that the $27 million they received from us for their health programs was a loan not a grant.  They were spending it on their civil war.  Didn’t he care that some day it would have to be paid back?  Why should he?  He would be long gone.  Unfortunately, this is the attitude of politicians.  Keep the constituents happy by giving them more, inflating the currency giving the appearance of greater wealth while paying off the debt with cheaper dollars.  It is all an illusion.

The global economic system is doomed and for those of us who are Christians and know the Lord and Bible prophecy, this shouldn’t be a surprise.  We know the system will fail and there will be a one world government under a wonderful appearing super charismatic leader we refer to as the “antichrist.”  Ultimately the financial system will completely implode and it will be replaced by what the Bible calls the “mark of the beast” which a person must have in order to buy or sell.  I illustrate this in a free e-book novel called Gideon’s Chronicles.

For the dozens of people who so hopefully emailed me about their RV hopes, remember, “to whom much is given, much will be required.”  (Luke 12:48)  What is our life here all about?  Our fleeting life or eternity?   We can at least give all to Him who gave His all for us.