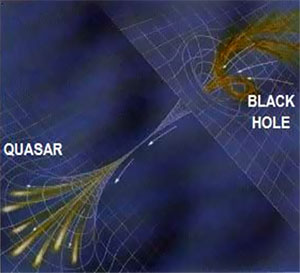 Quasars are relatively small phenomena (not objects) located at the most distant territories of our observable universe. Some think these mega-extreme distances go back to the beginning of Time, and they do, our time. Quasars emit more awesome energy than many galaxies combined!

How can relatively small ‘things’ so FAR away be observed at all? How do Quasars, which most astronomers/physicists/cosmologists view as OBJECTS, broadcast or spew in all directions such incomprehensible amounts of energy, matter, debris and possibly life forms? How can one little point in space produce incredible, ‘impossible’ masses of STUFF, seemingly from NOTHING? How does all this something come from nothing, a direct violation of the Laws of Physics? 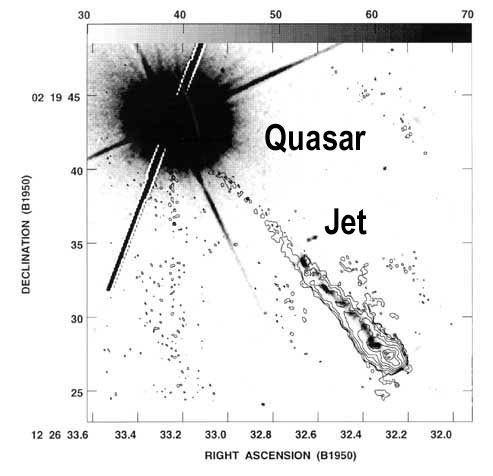 Haven’t you figured it out? QUASARS ARE WHITE HOLES >

Ah, balance in the universe~

A yin to a yang; we solve both mysteries of Black Holes and Quasars by connecting them.

First, let’s describe entering a Black Hole or the mechanics, in a sense, of how one could survive the trip and the nature of the journey. How do we WARP and POUR down a cosmic drain that even pulls light? Please remember that these warps, rifts, vortices or Black Holes Einstein predicted years before they were discovered are SPHERES in space.

You are not pulled into a Black Hole, space warps and simply BENDS that way. Everything around the sucking sphere FALLS into a tiny point in space from all directions. One (observable) micro-point called a Black [3D] Hole ‘pulls’ ALL IN and appears to violate the Laws of Physics.

[author’s note: I was hard-pressed to find any proper, true, visual pictures of Black Holes as I searched Google Images. The usual Euclidean plane graphics that look like 2-D ‘drains’ and space pictures of a BH vortex were 2-D, more like pulsars. The simple BH picture here is fairly accurate]. 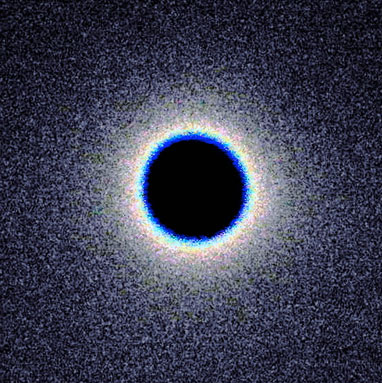 Matter, all bands of energy, all spectrums, EVERYTHING PHYSICAL and that includes the entire Electro-Magnetic Spectrum, such as cosmic rays, X-rays, long radio waves, short radio waves, television, ultraviolet and infrared frequencies (quanta/photons) have no choice and must BEND into the BLACK SPHERE and seemingly are vaporized into one point in space.

One tiny ‘vacuum’ point sucks and affects everything in all directions.

Let’s say your spaceship’s computer malfunctions a bit and you are caught in a Black Hole; you’re goin’ down, baby, no doubt about it!

Don’t believe the ‘Singularity’ concept which even Stephen Hawking has back peddled away from, or I guess back-wheeled from.

Someone finally told the ‘genius,’ “Hey…that breaks the Law. Everything transitions to a different form and doesn’t disappear by magic.”

There must be balance.

Now…your ship (energy) has plunged into the (not 2D) Event Horizon of a Black Hole and you entered a form of hyperspace. What a light-show blazed all around you and your spaceship. Oh, you are moving at unbelievable velocities and you are perfectly unharmed. The reason is right now, you people, you readers…are MOVING AT A SPEED FAR BEYOND YOUR COMPREHENSION. You are moving at all speeds; it’s relative. You are even moving at our limit of LIGHT-SPEED, right now! The Milky Way and clusters of galaxies are moving at LS, the Sun is moving at LS and taking us, aboard Earth, also at light-speed. Look out there and see no movement? Don’t be fooled.

This hyper speed we are all doing is unseen in the way we do not see our planet rotate; we observe the sky move instead. We do not see the dashboard of cars move when we travel at fast speeds; we view the streets and trees and houses whip by us. It’s because we don’t see the movement if we move with the movement. Sun does not rise; the horizon moves away.

There is an amazing, invisible phenomena that goes with the incredible speeds we are all traveling. Einstein theorized their existence and decades later, GRAVITY WAVES were verified. Every star, planet and moon emits G-Waves; it means everything is vibrating from side to side and we cannot observe the Gravity Wave warps.

Imagine wrinkles in the fabric of space as if we’re on a rug and some giant gave one end a big shake. Then a ripple or WAVE WARPED reality itself. And we never observed this side to side reality or universal flux because of the nature of Gravity Waves.

Another example is: What if atoms and photons and frequencies of what appeared as a stationary universe flowed out of a garden hose? Then the Being that held the garden hose gave the hose rhythmic shakes. The result was reality WARPED.

Reality is warping NOW, because we are moving so damn fast!

Back to our spaceship’s trip down the ‘Funnel’ of a Black Hole. The Sphere Event Horizon is the ‘top’ of the 3D Funnel and we think our ‘goose is cooked.’ We quickly plunged down what was now an elongated and colorful corridor through hyperspace. There were amazing colors, patterns and movements out of our ship’s windows.

Forget time and the universe or space you once existed within; they’re gone. Relative to those who knew you…you were shrinking. You shrank more and more, down and down and you were at the threshold of THE MOLECULAR LEVEL, relatively speaking…

But, wait! There was something ahead and things were different now as if another type of Event Horizon approached at high velocity. But it was really an APERATURE or the termination of the Black Hole Funnel, its very end.

And OUT you went! You were not in Hell. You were not crushed into pure nothingness. That would be impossible and breaks the Law.

At this time, you realized what had happened, the BH had shrunk you to the size of atoms. The ship moved among MOLECULES! Oh, no! But, wait. It’s Okay. Look. The universe appeared as normal space. You rode out of a massive light beam of energy, out of the very OPPOSITE OF A BLACK HOLE, A WHITE HOLE OR A QUASAR! 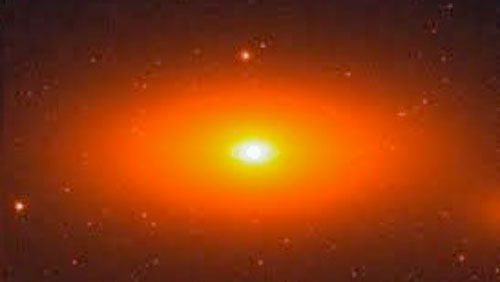 ‘Atomic particles’ were various groupings of suns and planets were the electrons that orbited around the nuclei.

THE FIELD IS UNIFIED, tell Albert.

Your ship was not in your old, much larger, universe, but there appeared to be a pretty cosmos around you, planets and moons that needed exploring. This might be Okay…

The odd thing was you felt some ‘eyes were upon you.’ And there were. Astronomers in this microscopic universe (that was not microscopic to the infinitesimal life forms in it) had their far range photographic telescopes trained on this particular super-distant Quasar.

When you entered a Black Hole, you soon exited a Quasar of another universe at the molecular level, relatively. Black Holes stood at the big end of the Funnel and the Quasar White Hole was the small end aperture or termination. Our Quasar ejecta is ‘stuff from a Larger World’s Black Hole.’ It is easier to explain the GUSHER that is a small Quasar, if it were a HOLE, a white one.

The Universe needed a Yin-Yang balance.

A powerful WHITE HOLE, not an object, in distant space spat out more energy than many galaxies combined. Something did come from what appeared as nothing. But really, all the tremendous material and STUFF that simply appeared and SHOT OUT in all directions from the ‘small’ Quasar, was only the matter, debris and energy frequencies of what was caught in the Black Hole of the much Larger Universe, above.

Could high-tech life forms use the Black Hole / Quasar conduits or corridor systems as a means of transportation? Why not? IF such networks or Funnel Systems connected the worlds, surely super civilizations were intelligent enough to negotiate the ‘space-ways’ that curved, eddied and sometimes whirl-pooled like water down a Black Hole DRAIN, out of one universe and into another. Why not?

Are there other universes? How’s this question?

ARE THERE OTHER BIG BANGS?

What is the pattern? The pattern is this is ONLY OUR Big Bang.

Now let’s say we have the means to observe so much farther into a SUPER UNIVERSE THAT IS INFINITE (no walls, ever). We devised the means to look billions of times further into (one?) forever Universe…

What might we observe? The ‘pattern’ tells us, “Oh, look…another Big Bang, and another and another in a cluster. There are also clusters of clusters of Big Bangs, like galactic Local Groups.” We move back further and really have gone NOWHERE, so far, in the eternal Infinite…

Big Bangs go on forever. There are Infinite Big Bangs.

[When I realized this revelation, it threw me to the floor and I bawled like a baby! Not the only time].

What did endless Big Bangs do to the concept of God, prove it or disprove it? Could our entire Big Bang (try to imagine all that entails) be insignificant in the Far Greater Scheme of Things?

After 100s of physicists & Astronomical Societies & professors of Astronomy have dismissed this article, I heard from a researcher:
“…You have more believers out there that are quietly listening. In time they will change and see the truth in your words just like the 13-point Atlantis Grid. As far as I know you said it first before the main stream media even half acknowledged it. It was shown on  the ‘Ancient Alien’ TV series on the History Channel. They now present the idea that the pylons are like power transmitters. It was you who first said that!
Another article I just read this morning: http://www.washingtonpost.com/news/speaking-of-science/wp/2015/08/25/stephen-hawking-believes-hes-solved-a-huge-mystery-about-black-holes/ about black holes. Imagine the coincidence that you sent this to the scientific community about black holes and here is Stephen Hawking stating that he solved the mystery about black holes. When you read the article he only goes halfway without really answering where does it all go when it passes through a black hole. I would not be surprised if I read 6 months from now that black holes are connected to quasars. And then they get the credit for it. But I know that you said it first. – R.K.”
Post Views: 52