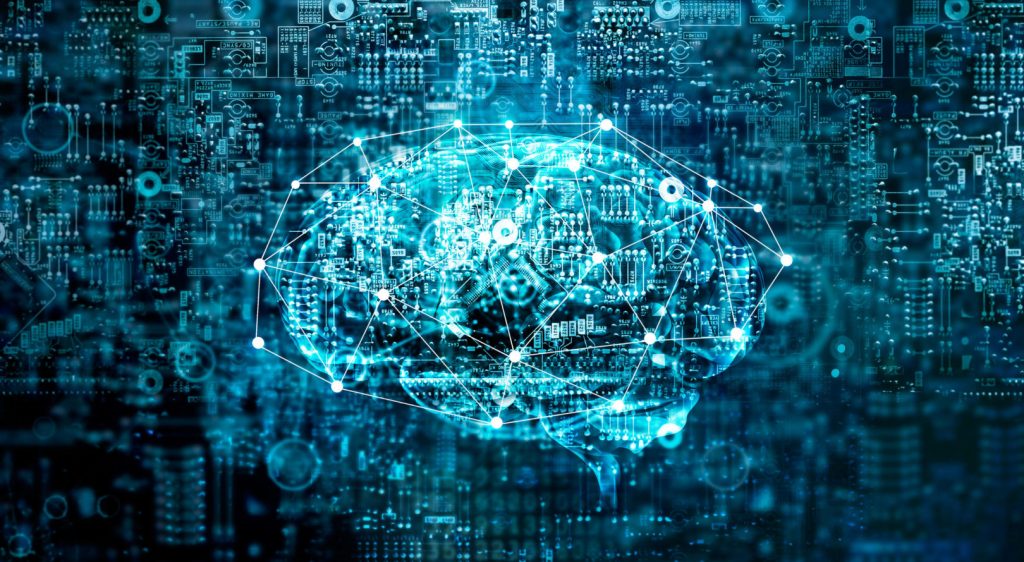 Artificial intelligence enables computers and machines to mimic the perception, learning, problem-solving, and decision-making capabilities of the human mind.

What is artificial intelligence?

In computer science, the term artificial intelligence (AI) refers to any human-like intelligence exhibited by a computer, robot, or other machine. In popular usage, artificial intelligence refers to the ability of a computer or machine to mimic the capabilities of the human mind—learning from examples and experience, recognizing objects, understanding and responding to language, making decisions, solving problems—and combining these and other capabilities to perform functions a human might perform, such as greeting a hotel guest or driving a car.

After decades of being relegated to science fiction, today, AI is part of our everyday lives. The surge in AI development is made possible by the sudden availability of large amounts of data and the corresponding development and wide availability of computer systems that can process all that data faster and more accurately than humans can. AI is completing our words as we type them, providing driving directions when we ask, vacuuming our floors, and recommending what we should buy or binge-watch next. And it’s driving applications—such as medical image analysis—that help skilled professionals do important work faster and with greater success.

As common as artificial intelligence is today, understanding AI and AI terminology can be difficult because many of the terms are used interchangeably; and while they are actually interchangeable in some cases, they aren’t in other cases. What’s the difference between artificial intelligence and machine learning? Between machine learning and deep learning? Between speech recognition and natural language processing? Between weak AI and strong AI? This article will try to help you sort through these and other terms and understand the basics of how AI works.

WHO CONTROLS AI? DR. BEN GOERTZEL ON WHAT ARTIFICIAL INTELLIGENCE WILL ACTUALLY BE USED FOR

Artificial intelligence (AI) is intelligence demonstrated by machines, unlike the natural intelligence displayed by humans and animals, which involves consciousness and emotionality. The distinction between the former and the latter categories is often revealed by the acronym chosen. ‘Strong’ AI is usually labelled as artificial general intelligence (AGI) while attempts to emulate ‘natural’ intelligence have been called artificial biological intelligence (ABI). Leading AI textbooks define the field as the study of “intelligent agents”: any device that perceives its environment and takes actions that maximize its chance of successfully achieving its goals. Colloquially, the term “artificial intelligence” is often used to describe machines that mimic “cognitive” functions that humans associate with the human mind, such as “learning” and “problem solving”.

As machines become increasingly capable, tasks considered to require “intelligence” are often removed from the definition of AI, a phenomenon known as the AI effect. A quip in Tesler’s Theorem says “AI is whatever hasn’t been done yet.” For instance, optical character recognition is frequently excluded from things considered to be AI, having become a routine technology. Modern machine capabilities generally classified as AI include successfully understanding human speech, competing at the highest level in strategic game systems (such as chess and Go), and also imperfect-information games like poker, self-driving cars, intelligent routing in content delivery networks, and military simulations.

Artificial intelligence was founded as an academic discipline in 1955, and in the years since has experienced several waves of optimism, followed by disappointment and the loss of funding (known as an “AI winter”), followed by new approaches, success and renewed funding. After AlphaGo successfully defeated a professional Go player in 2015, artificial intelligence once again attracted widespread global attention. For most of its history, AI research has been divided into sub-fields that often fail to communicate with each other. These sub-fields are based on technical considerations, such as particular goals (e.g. “robotics” or “machine learning”), the use of particular tools (“logic” or artificial neural networks), or deep philosophical differences. Sub-fields have also been based on social factors (particular institutions or the work of particular researchers).

The traditional problems (or goals) of AI research include reasoning, knowledge representation, planning, learning, natural language processing, perception and the ability to move and manipulate objects. AGI is among the field’s long-term goals. Approaches include statistical methods, computational intelligence, and traditional symbolic AI. Many tools are used in AI, including versions of search and mathematical optimization, artificial neural networks, and methods based on statistics, probability and economics. The AI field draws upon computer science, information engineering, mathematics, psychology, linguistics, philosophy, and many other fields.

The field was founded on the assumption that human intelligence “can be so precisely described that a machine can be made to simulate it”. This raises philosophical arguments about the mind and the ethics of creating artificial beings endowed with human-like intelligence. These issues have been explored by myth, fiction and philosophy since antiquity. Some people also consider AI to be a danger to humanity if it progresses unabated. Others believe that AI, unlike previous technological revolutions, will create a risk of mass unemployment.

In the twenty-first century, AI techniques have experienced a resurgence following concurrent advances in computer power, large amounts of data, and theoretical understanding; and AI techniques have become an essential part of the technology industry, helping to solve many challenging problems in computer science, software engineering and operations research.

Physicist Stephen Hawking, Microsoft founder Bill Gates, history professor Yuval Noah Harari, and SpaceX founder Elon Musk have expressed concerns about the possibility that AI could evolve to the point that humans could not control it, with Hawking theorizing that this could “spell the end of the human race”.

The development of full artificial intelligence could spell the end of the human race. Once humans develop artificial intelligence, it will take off on its own and redesign itself at an ever-increasing rate. Humans, who are limited by slow biological evolution, couldn’t compete and would be superseded. —?Stephen Hawking

In his book Superintelligence, philosopher Nick Bostrom provides an argument that artificial intelligence will pose a threat to humankind. He argues that sufficiently intelligent AI, if it chooses actions based on achieving some goal, will exhibit convergent behavior such as acquiring resources or protecting itself from being shut down. If this AI’s goals do not fully reflect humanity’s—one example is an AI told to compute as many digits of pi as possible—it might harm humanity in order to acquire more resources or prevent itself from being shut down, ultimately to better achieve its goal. Bostrom also emphasizes the difficulty of fully conveying humanity’s values to an advanced AI. He uses the hypothetical example of giving an AI the goal to make humans smile to illustrate a misguided attempt. If the AI in that scenario were to become superintelligent, Bostrom argues, it may resort to methods that most humans would find horrifying, such as inserting “electrodes into the facial muscles of humans to cause constant, beaming grins” because that would be an efficient way to achieve its goal of making humans smile. In his book Human Compatible, AI researcher Stuart J. Russell echoes some of Bostrom’s concerns while also proposing an approach to developing provably beneficial machines focused on uncertainty and deference to humans, possibly involving inverse reinforcement learning.

Concern over risk from artificial intelligence has led to some high-profile donations and investments. A group of prominent tech titans including Peter Thiel, Amazon Web Services and Musk have committed $1 billion to OpenAI, a nonprofit company aimed at championing responsible AI development. The opinion of experts within the field of artificial intelligence is mixed, with sizable fractions both concerned and unconcerned by risk from eventual superhumanly-capable AI. Other technology industry leaders believe that artificial intelligence is helpful in its current form and will continue to assist humans. Oracle CEO Mark Hurd has stated that AI “will actually create more jobs, not less jobs” as humans will be needed to manage AI systems. Facebook CEO Mark Zuckerberg believes AI will “unlock a huge amount of positive things,” such as curing disease and increasing the safety of autonomous cars. In January 2015, Musk donated $10 million to the Future of Life Institute to fund research on understanding AI decision making. The goal of the institute is to “grow wisdom with which we manage” the growing power of technology. Musk also funds companies developing artificial intelligence such as DeepMind and Vicarious to “just keep an eye on what’s going on with artificial intelligence. I think there is potentially a dangerous outcome there.”

For the danger of uncontrolled advanced AI to be realized, the hypothetical AI would have to overpower or out-think all of humanity, which a minority of experts argue is a possibility far enough in the future to not be worth researching. Other counterarguments revolve around humans being either intrinsically or convergently valuable from the perspective of an artificial intelligence.

Existential risk from artificial general intelligence is the hypothesis that substantial progress in artificial general intelligence (AGI) could someday result in human extinction or some other unrecoverable global catastrophe. It is argued that the human species currently dominates other species because the human brain has some distinctive capabilities that other animals lack. If AI surpasses humanity in general intelligence and becomes “superintelligent”, then it could become difficult or impossible for humans to control. Just as the fate of the mountain gorilla depends on human goodwill, so might the fate of humanity depend on the actions of a future machine superintelligence.

The likelihood of this type of scenario is widely debated, and hinges in part on differing scenarios for future progress in computer science. Once the exclusive domain of science fiction, concerns about superintelligence started to become mainstream in the 2010s, and were popularized by public figures such as Stephen Hawking, Bill Gates, and Elon Musk.

A second source of concern is that a sudden and unexpected “intelligence explosion” might take an unprepared human race by surprise. To illustrate, if the first generation of a computer program able to broadly match the effectiveness of an AI researcher is able to rewrite its algorithms and double its speed or capabilities in six months, then the second-generation program is expected to take three calendar months to perform a similar chunk of work. In this scenario the time for each generation continues to shrink, and the system undergoes an unprecedentedly large number of generations of improvement in a short time interval, jumping from subhuman performance in many areas to superhuman performance in all relevant areas. Empirically, examples like AlphaZero in the domain of Go show that AI systems can sometimes progress from narrow human-level ability to narrow superhuman ability extremely rapidly.